Enlarge Ice hockey ISBN (identifier)
This article is about the sport. For other uses, see Hockey (disambiguation).

Hockey is a sport in which two teams play against each other by trying to manoeuvre a ball or a puck into the opponent's goal using a hockey stick. There are many types of hockey such as bandy, field hockey, ice hockey and rink hockey.

In most of the world, the term hockey by itself refers to field hockey, while in Canada, the United States, Russia and most of Eastern and Northern Europe, the term usually refers to ice hockey.[1]

The first recorded use of the word hockey is in the 1773 book Juvenile Sports and Pastimes, to Which Are Prefixed, Memoirs of the Author: Including a New Mode of Infant Education by Richard Johnson (Pseud. Master Michel Angelo), whose chapter XI was titled "New Improvements on the Game of Hockey".[2] The belief that hockey was mentioned in a 1363 proclamation by King Edward III of England[3] is based on modern translations of the proclamation, which was originally in Latin and explicitly forbade the games "Pilam Manualem, Pedivam, & Bacularem: & ad Canibucam & Gallorum Pugnam".[4][5] The English historian and biographer John Strype did not use the word "hockey" when he translated the proclamation in 1720, instead translating "Canibucam" as "Cambuck";[6] this may have referred to either an early form of hockey or a game more similar to golf or croquet.[7]

The word hockey itself is of unknown origin. One supposition is that it is a derivative of hoquet, a Middle French word for a shepherd's stave.[8] The curved, or "hooked" ends of the sticks used for hockey would indeed have resembled these staves. Another supposition derives from the known use of cork bungs, (stoppers) in place of wooden balls to play the game. The stoppers came from barrels containing "hock" ale, also called "hocky".[9] 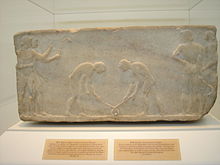 bas relief approx. 600 BC, in the National Archaeological Museum of Athens

Games played with curved sticks and a ball can be found in the histories of many cultures. In Egypt, 4000-year-old carvings feature teams with sticks and a projectile, hurling dates to before 1272 BC in Ireland, and there is a depiction from approximately 600 BC in Ancient Greece, where the game may have been called kerētízein or (κερητίζειν) because it was played with a horn or horn-like stick (kéras, κέρας).[10] In Inner Mongolia, the Daur people have been playing beikou, a game similar to modern field hockey, for about 1,000 years.[11]

Most evidence of hockey-like games during the Middle Ages is found in legislation concerning sports and games. The Galway Statute enacted in Ireland in 1527 banned certain types of ball games, including games using "hooked" (written "hockie", similar to "hooky") sticks.[12]

...at no tyme to use ne occupye the horlinge of the litill balle with hockie stickes or staves, nor use no hande ball to play withoute walles, but only greate foote balle[13]

By the 19th century, the various forms and divisions of historic games began to differentiate and coalesce into the individual sports defined today. Organizations dedicated to the codification of rules and regulations began to form, and national and international bodies sprang up to manage domestic and international competition.

Bandy is played with a ball on a football pitch-sized ice arena (bandy rink), typically outdoors, and with many rules similar to association football. It is played professionally in Russia and Sweden. The sport is recognized by the IOC; its international governing body is the Federation of International Bandy. 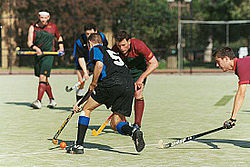 Field hockey is played on gravel, natural grass, or sand-based or water-based artificial turf, with a small, hard ball approximately 73 mm (2.9 in) in diameter. The game is popular among both males and females in many parts of the world, particularly in Europe, Asia, Australia, New Zealand, South Africa, and Argentina. In most countries, the game is played between single-sex sides, although they can be mixed-sex. 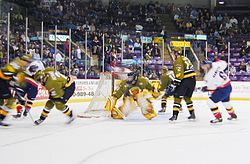 Ice hockey is played between two teams of skaters on a large flat area of ice, using a three-inch-diameter (76.2 mm) vulcanized rubber disc called a puck. This puck is often frozen before high-level games to decrease the amount of bouncing and friction on the ice. The game is played all over North America, Europe and to varying extents in many other countries around the world. It is the most popular sport in Canada, Finland, Latvia, the Czech Republic, and Slovakia. Ice hockey is the national sport of Latvia[17] and the national winter sport of Canada.[18] Ice hockey is played at a number of levels, by all ages.

The contemporary sport developed in Canada from European and native influences. These included various stick and ball games similar to field hockey, bandy and other games where two teams push a ball or object back and forth with sticks. These were played outdoors on ice under the name "hockey" in England throughout the 19th century, and even earlier under various other names.[20] In Canada, there are 24 reports[21] of hockey-like games in the 19th century before 1875 (five of them using the name "hockey"). The first organized and recorded game of ice hockey was played indoors in Montreal, Quebec, Canada, on March 3, 1875, and featured several McGill University students.

Ice hockey sticks are long L-shaped sticks made of wood, graphite, or composites with a blade at the bottom that can lie flat on the playing surface when the stick is held upright and can legally curve either way, for left- or right-handed players.[22]

Ice sledge hockey or para ice hockey is a form of ice hockey designed for players with physical disabilities affecting their lower bodies. Players sit on double-bladed sledges and use two sticks; each stick has a blade at one end and small picks at the other. Players use the sticks to pass, stickhandle and shoot the puck, and to propel their sledges. The rules are very similar to IIHF ice hockey rules.[23]

Canada is a recognized international leader in the development of sledge hockey, and much of the equipment for the sport was first developed there, such as sledge hockey sticks laminated with fiberglass, as well as aluminum shafts with hand-carved insert blades and special aluminum sledges with regulation skate blades. 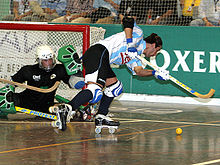 Inline hockey is a variation of roller hockey very similar to ice hockey, from which it is derived. Inline hockey is played by two teams, consisting of four skaters and one goalie, on a dry rink divided into two halves by a center line, with one net at each end of the rink. The game is played in three 15-minute periods with a variation of the ice hockey off-side rule. Icings are also called, but are usually referred to as illegal clearing.[24] The governing body is the IIHF, as for ice hockey, but some leagues and competitions do not follow the IIHF regulations, in particular USA Inline and Canada Inline.

Roller hockey, also known as quad hockey, international-style ball hockey, rink hockey and Hoquei em Patins, is an overarching name for a roller sport that has existed since long before inline skates were invented. This sport is played in over sixty countries and has a worldwide following. Roller hockey was a demonstration sport at the 1992 Barcelona Summer Olympics.

Also known as road hockey, this is a dry-land variant of ice and roller hockey played year-round on a hard surface (usually asphalt). A ball is usually used instead of a puck, and protective equipment is not usually worn.

Other forms of hockey 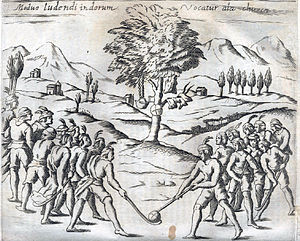 Other games derived from hockey or its predecessors include the following: 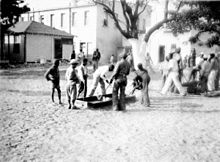