According to the legend, after defeating the Ming China. In early 1428, Emperor Lê Lợi was boating on the lake when a Golden Turtle God (Kim Qui) surfaced and asked for his magic sword, Heaven's Will. Lợi concluded that Kim Qui had come to reclaim the sword that its master, a local God, the Dragon King (Long Vương) had given Lợi sometime earlier to defeat Ming China. Later, the Emperor gave the sword back to the turtle after he finished fighting off the Chinese. Emperor Lợi renamed the lake to commemorate this event, from its former name Luc Thuy meaning "Green Water". The Turtle Tower (Tháp Rùa) standing on a small island near the centre of the lake is linked to the legend. The first name of Hoàn Kiếm lake is Tả Vọng, when the King hadn't given the Magical Sword back to the Golden Turtle God (Cụ Rùa).

Large soft-shell turtles, either of the species Rafetus swinhoei or a separate species named Rafetus leloi in honor of the emperor, had been sighted in the lake for many years. The last known individual was found dead on January 19, 2016. There are three remaining turtles of the species R. swinhoei.

Near the northern shore of the lake lies Jade Island on which the Temple of the Jade Mountain (Ngoc Son Temple) stands. The temple was erected in the 18th century. It honours the 13th-century military leader Tran Hung Dao who distinguished himself in defeating the Mongol invasions of Vietnam thrice; the classic scholar Van Xuong; and Nguyen Van Sieu, a famous writer and official who undertook repairs of the temple in 1864. Jade Island is connected to the shore by the wooden Thê Húc Bridge, painted vermillion red. The bridge's name is poetically translated as "Perch of the Morning Sunlight".

A panoramic view of the Hoan Kiem Lake by night. 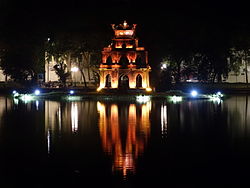