History of the World Trade Organization 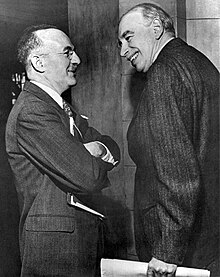 The economists Harry White (left) and John Maynard Keynes at the Bretton Woods Conference. Both had been strong advocates of a central-controlled international trade environment and recommended the establishment of three institutions: the IMF (for fiscal and monetary issues); the World Bank (for financial and structural issues); and the ITO (for international economic cooperation).[1]

The World Trade Organization (WTO) is an intergovernmental organization which regulates international trade. The WTO officially commenced on 1 January 1995 under the Marrakesh Agreement, signed by 123 nations on 15 April 1994, replacing the General Agreement on Tariffs and Trade (GATT), which commenced in 1948.[2] The WTO deals with regulation of trade between participating countries by providing a framework for negotiating trade agreements and a dispute resolution process aimed at enforcing participants' adherence to WTO agreements, which is signed by representatives of member governments[3]:fol.9–10 and ratified by their parliaments.[4] Most of the issues that the WTO focuses on derive from previous trade negotiations, especially from the Uruguay Round (1986–1994).

The World Trade Organization's predecessor, the General Agreement on Tariffs and Trade (GATT), was established after World War II in the wake of other new multilateral institutions dedicated to international economic cooperation – notably the Bretton Woods institutions known as the World Bank and the International Monetary Fund. A comparable international institution for trade, named the International Trade Organization was successfully negotiated. The ITO was to be a United Nations specialized agency and would address not only trade barriers but other issues indirectly related to trade, including employment, investment, restrictive business practices, and commodity agreements. But the ITO treaty was not approved by the U.S. and a few other signatories and never went into effect.[5][6][7]

The GATT was the only multilateral instrument governing international trade from 1946 until the WTO was established on 1 January 1995.[9] Despite attempts in the mid-1950s and 1960s to create some form of institutional mechanism for international trade, the GATT continued to operate for almost half a century as a semi-institutionalized multilateral treaty regime on a provisional basis.[10]

From Geneva to Tokyo

Seven rounds of negotiations occurred under GATT. The first real GATT trade rounds concentrated on further reducing tariffs. Then, the Kennedy Round in the mid-sixties brought about a GATT anti-dumping Agreement and a section on development. The Tokyo Round during the seventies was the first major attempt to tackle trade barriers that do not take the form of tariffs, and to improve the system, adopting a series of agreements on non-tariff barriers, which in some cases interpreted existing GATT rules, and in others broke entirely new ground. Because these plurilateral agreements were not accepted by the full GATT membership, they were often informally called "codes". Several of these codes were amended in the Uruguay Round, and turned into multilateral commitments accepted by all the WTO members. Only four remained plurilateral (those on government procurement, bovine meat, civil aircraft and dairy products), but in 1997 WTO members agreed to terminate the bovine meat and dairy agreements, leaving only two.[9]

During the Doha Round, the US government blamed Brazil and India for being inflexible and the EU for impeding agricultural imports.[11] The then-President of Brazil, Luiz Inácio Lula da Silva (above right), responded to the criticisms by arguing that progress would only be achieved if the richest countries (especially the US and countries in the EU) made deeper cuts in agricultural subsidies and further opened their markets for agricultural goods.[12]

Well before GATT's 40th anniversary, its members concluded that the GATT system was straining to adapt to a new globalizing world economy.[13][14] In response to the problems identified in the 1982 Ministerial Declaration (structural deficiencies, spill-over impacts of certain countries' policies on world trade GATT could not manage etc.), the eighth GATT round – known as the Uruguay Round – was launched in September 1986, in Punta del Este, Uruguay.[13]

It was the biggest negotiating mandate on trade ever agreed: the talks were going to extend the trading system into several new areas, notably trade in services and intellectual property, and to reform trade in the sensitive sectors of agriculture and textiles; all the original GATT articles were up for review.[14] The Final Act concluding the Uruguay Round and officially establishing the WTO regime was signed 15 April 1994, during the ministerial meeting at Marrakesh, Morocco, and hence is known as the Marrakesh Agreement.[15]

The GATT still exists as the WTO's umbrella treaty for trade in goods, updated as a result of the Uruguay Round negotiations (a distinction is made between GATT 1994, the updated parts of GATT, and GATT 1947, the original agreement which is still the heart of GATT 1994).[13] GATT 1994 is not however the only legally binding agreement included via the Final Act at Marrakesh; a long list of about 60 agreements, annexes, decisions and understandings was adopted. The agreements fall into a structure with six main parts:

In terms of the WTO's principle relating to tariff "ceiling-binding" (No. 3), the Uruguay Round has been successful in increasing binding commitments by both developed and developing countries, as may be seen in the percentages of tariffs bound before and after the 1986–1994 talks.[18]

The World Trade Organization Ministerial Conference of 1998, in the Palace of Nations (Geneva, Switzerland).

The WTO General Council, on 26 May 2009, agreed to hold a seventh WTO ministerial conference session in Geneva from 30 November–3 December 2009. A statement by chairman Amb. Mario Matus acknowledged that the prime purpose was to remedy a breach of protocol requiring two-yearly "regular" meetings, which had lapsed with the Doha Round failure in 2005, and that the "scaled-down" meeting would not be a negotiating session, but "emphasis will be on transparency and open discussion rather than on small group processes and informal negotiating structures". The general theme for discussion was "The WTO, the Multilateral Trading System and the Current Global Economic Environment"[20]

The WTO launched the current round of negotiations, the Doha Development Round, at the fourth ministerial conference in Doha, Qatar in November 2001. This was to be an ambitious effort to make globalization more inclusive and help the world's poor, particularly by slashing barriers and subsidies in farming.[21] The initial agenda comprised both further trade liberalization and new rule-making, underpinned by commitments to strengthen substantial assistance to developing countries.[22]

The negotiations have been highly contentious. Disagreements still continue over several key areas including agriculture subsidies, which emerged as critical in July 2006.[23] According to a European Union statement, "The 2008 Ministerial meeting broke down over a disagreement between exporters of agricultural bulk commodities and countries with large numbers of subsistence farmers on the precise terms of a 'special safeguard measure' to protect farmers from surges in imports."[24] The position of the European Commission is that "The successful conclusion of the Doha negotiations would confirm the central role of multilateral liberalisation and rule-making. It would confirm the WTO as a powerful shield against protectionist backsliding."[22] An impasse remains and, as of August 2013[update], agreement has not been reached, despite intense negotiations at several ministerial conferences and at other sessions. On 27 March 2013, the chairman of agriculture talks announced "a proposal to loosen price support disciplines for developing countries’ public stocks and domestic food aid." He added: "...we are not yet close to agreement—in fact, the substantive discussion of the proposal is only beginning."[25]