History of the Jews in Antwerp 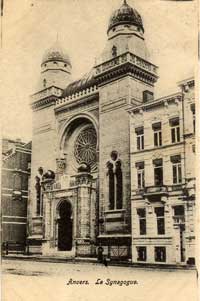 The history of the Jews in Antwerp, Belgium goes back at least eight hundred years. Currently, the Jewish community of Antwerp consists of around 18,000.[1]

Baldwin IV, Count of Flanders, invited Rabbi Ya'aqov son of Rabbi Yequtiel, and thirty other Jews, to settle in Flanders in 1023. While it is not known precisely where they settled, this is considered to be the establishment of the Jewish community in the region.

The first Jewish presence in Antwerp is attested to by the will of Henry III, the Duke of Brabant and Margrave of Antwerp, who in 1261 expressed his wish that the Jews of Brabant should be expelled and destroyed because they were all considered "usurers".

In the mid-14th century, John III, the Duke of Brabant, conducted a massive anti-Jewish campaign in Brussels and Leuven and drove them from the city.

A new group of Jewish immigrants started to settle in Antwerp in the early 16th century, when the city became a relatively safe haven for crypto-Jews fleeing the persecutions and the expulsions in the Iberian Peninsula. An often tenuous presence was maintained for the next century and a half, although Jews were not allowed to acquire citizenship and persecution was common.

It was not until 1794 and with the arrival of the French Revolution that Jews could settle freely in Antwerp again. The current Jewish community of Antwerp was officially established in 1816, when there were about one hundred Jews living in the city. This, the first legally recognized community, was known as the Jewish Community (Communauté Israelite). The first Jewish public prayers were held in the private home of Moise Kreyn, having received the approval of the city authorities. The Jews of Antwerp acquired possession of a cemetery in 1828. There were 151 Jews living in Antwerp in 1829.

During the Second World War, 65% of the city's Jews perished in the Holocaust (vs. only 35% of Jews from Brussels). On April 14, 1941, the so-called "Antwerp pogrom" occurred when some 200 followers of the Vlaams Nationaal Verbond ("Flemish National Union"), Volksverwering ("People's Defense"), Anti-Jewish League and other pro-Nazi anti-Semitic groups burned two synagogues in the Oosten straat, smashed the windows of Jewish-owned shops, damaged religious symbols and harassed the Jewish population.[2] In May–September 1942, some 1500 Jewish men from Antwerp were taken into forced labor in Northern France, building the "Atlantic Wall" for the Organisation Todt. From the end of July until November 1942, on three occasions, Jews in Antwerp were rounded up by the Germans with the collaboration of the local police. From a community of around 35,000 Jews in Antwerp before the war, some 15,000 remained in the city after 1945.

See also: The Holocaust in Belgium

The Jewish community of Antwerp consists of around 18,000 members. The majority of residents identifying themselves as Jewish belong to traditional or Orthodox communities, although levels of religious practice vary. The Haredi, or ultra-orthodox Jews, traditionally tend to live concentrated in the city center in an area close to the Antwerp Central railway station. This neighborhood is also sometimes known as "Jewish Antwerp" (Dutch: Joods Antwerpen). Its main attraction is its close proximity to the diamond bourse, where in earlier days a large part of the community worked. It is also where the Jewish schools, kosher food outlets, and general Jewish amenities are located.

In recent years many of the younger generation of secular Jews have moved away from the crowded city center. There has also been small but steady growth of Orthodox satellite communities in suburbs such as Edegem, Wilrijk and Brasschaat. This may cause the Antwerp community to seem overwhelmingly Haredi to the casual observer. After New York City, London and Paris, Antwerp is one of the largest communities of Haredi Jews outside Israel.[citation needed]

Within the prominently-ashkenazi religious community there are two religious councils, known as kehillas; and a small sefardi council:

The late Rabbi Chaim Kreiswirth, was the Chief Rabbi of the Machzikei Hadass kehilla for many years and was widely regarded as a pre-eminent scholar of Talmud. He died in 2001 and was replaced by Rabbi Rubinstein of Israel, who died a few months after being nominated to the post. Since December 2010, the position has been filled by Rabbi Aaron Schiff. Rabbi Schiff, a follower of the current Grand Rabbi of Belz (Hasidic dynasty), Rabbi Yissachar Dov Rokeach, is an alumnus of the Erlau yeshiva in Jerusalem and was previously the Rabbi of the local Alexander synagogue.

An essential difference between these two organizations is apparent in the Shomrei Hadas' alignment with religious Zionist doctrine, which the Machzikei Hadass rejects.

Hasidic Jews comprise about forty percent of the Jews of Antwerp.[1] Hasidic movements represented in Antwerp include:

The Pshevorsk movement is the only internationally recognized Hasidic movement based in Antwerp. The Pshevorsker Rebbe, Rabbi Leibish Leiser, lives in Antwerp, as did his predecessors. Pshevorsker Hasidim live mainly in Antwerp, London, and Manchester; on Jewish holidays, many come to Antwerp to see their rebbe.

There are also other Hasidic rebbes in Antwerp, including a Spinka Rebbe and a Zhemigrader Rebbe. These groups have rebbes in other locations as well.

There is a small Lithuanian Jewish community. Furthermore, there are organizations of Georgian Jews, a Sephardic synagogue, and secular Jewish organizations.

As in other cities with large Jewish communities, Antwerp is surrounded by a wire called "eruv" (Eiroew in Dutch). In contrast to the eruvs in New York City or other large cities, the Antwerp eruv surrounds the whole city center. The presence of this eruv allows Jews to interpret the city as one big house, making it easier to avoid breaking some Sabbath regulations within it. The wire constituting the eruv can be found close to the Singel at a height of 6 meters, and at the entrance of the Diamond district.[3]

A number of Jewish schools are found throughout the Jewish district (95% of the Jewish children of Antwerp receive a religious education). The three main Jewish schools in Antwerp are the Yesode Hatora of the Machsike Hadas, and the Yavne and Tachkemoni schools of the Shomre Hadas.

The Yesode Hatora - Beth Jacob population is composed primarily of students from Hasidic, Haredi, and Orthodox backgrounds. It provides instruction in religious as well as secular studies: Students follow a dual curriculum starting in pre-school/kindergarten, through primary school and secondary school. Established in 1903, it is the oldest of Antwerp's Jewish schools, and has the highest population of Jewish students. Students are educated in accordance with the values of Haredi Judaism, and fulfill the educational requirements of the Belgian Ministry of Education. The student population is separated by gender; male students attend Yesode Hatora, and female students attend Beth Jacob. In accordance with the religious ideology that puts little value on secular learning, the school actively discourages the pursuit of secular higher education.

The Yavne school is aligned with the religious Zionist movement. Similar to Yesode Hatora/Beth Jacob, the Yavne school follows a dual curriculum composed of religious and secular studies. Students are educated in accordance with the values of religious Zionism, and fulfill the educational requirements of the Belgian Ministry of Education. The school is not mixed; male students attend the Yeshiva Tichonit and females the Ulpena Lebanot. An estimated 98% of Yavne students typically emigrate to Israel (commonly referred to in Jewish communities as "making aliyah") within one year of graduation from secondary school. In recent years, far-reaching improvements have been achieved in the secular curriculum. Religious instruction also adheres to high standards and a widely developed curriculum.

The Tachkemoni is a fully co-educational school, attracting students from primarily secular Jewish backgrounds and some modern-Orthodox families. Its high level of Hebrew and serious preparation for the Jerusalem Examination (Bechina Yerushalmit) administered by the Jewish Agency and the Hebrew University of Jerusalem makes it one of the finest Jewish educational institutions in Europe. Most graduates pursue university studies after completing secondary school, and many spend a year in Israel. Tachkemoni was founded in 1920 by Rabbi Moshe Avigdor Amiel, a moderate religious Zionist. His vision of a strong Jewish education, along with a good secular education, is still part of the culture of Tachkemoni.

In addition, there are several kollelim, where married men can continue their studies. The famed Haredi Etz Chaim Yeshiva, where hundreds of young men from around the world study, is now located in the Wilrijk district, having previously been in the Antwerp suburban towns, first of Heide, then Kapellen.

Many synagogues, schools, charities, and social groups care for the environment. A majority of Jews living in Antwerp are multi-lingual and communicate in a variety of languages. Yiddish, French, Hebrew, English, and German are all widely spoken among members of the community, as well as Dutch. The Jewish community of Antwerp did not immediately adopt the locally spoken Dutch language as their common spoken language. Instead, in line with the people they worked with in the diamond trade, they spoke French, the language of commerce in Antwerp until after World War II. In recent years, English has taken over as the common language of choice, while stricter enforcement of local language regulations ensure that all children are fluent in Dutch. The use of language in Antwerp's Jewish community is a complex issue: While community members possess fair knowledge of different languages, there is a lack of uniformity when it comes to effective communication and discussion in a common language.

The Jewish community in Antwerp has maintained a strong and active presence in the local diamond trade. After World War II, Belgian Jewish survivors as well as others from Eastern Europe settled in Antwerp and built up an influential and highly successful stake in the diamond business. Whether through established diamond trading offices, cutting and polishing factories, or as diamond brokers, Antwerp's Jews established themselves as capable businessmen and -women.

Over the course of the past decade, however, much of the wholesale diamond trade has been taken over by the Jain Indian community. With easy access to manufacturing centers in India, where production costs are significantly cheaper, the Jewish community has lost some of its influence as far as the diamond trade is concerned. However, the diamond business remains a common profession shared by most of the members of the Jewish community.

The future of Antwerp's Jewish community is uncertain, with a record number of Jews opting for residence in Israel and to a lesser extent in the United States and the United Kingdom.[citation needed]

Antisemitism in the 21st Century

During November 2013 alone, six anti-semitic incidents were recorded throughout Antwerp. These include the chasing of Jewish children and the attack of an old Jewish woman. All the incidents were committed by men of Middle Eastern or North African descent.[4]