Yukon (formerly the Yukon Territory) is one of Canada's three territories in the country's extreme northwest. Its history of human habitation dates back to the Ice Age, and the original inhabitants are believed to have arrived over 20,000 years ago by migrating over the land bridge from Asia. In the 18th century, Russian explorers began trade with the First Nations people along the Alaskan coast, beginning the establishment of trade relations throughout the region. The famous Klondike Gold Rush began after gold was discovered near Dawson City in 1896. As a result of the influx of people looking for gold, it was made a separate territory in 1898, split off from the Northwest Territories. The second major event in the Yukon's history is the construction of the Alaska Highway during the Second World War, for the transportation of war supplies. Eventually Whitehorse became the largest city in the Yukon, and then the capital in 1953.[1]

Disputed evidence of the oldest remains of human inhabitation in North America have been found in the Yukon. A large number of apparently human-modified animal bones were discovered in the Old Crow area in the northern Yukon that have been dated to 25,000–40,000 years ago by carbon dating.[2] The central and northern Yukon were not glaciated,[3] as they were part of Beringia.

At about 800, a large volcanic eruption in Mount Churchill near the Alaska border blanketed the southern Yukon with ash.[3] That layer of ash can still be seen along the Klondike Highway. Yukon First Nations stories speak of all the animals and fish dying as a result. Similar stories are told among the Athabaskan-speaking Navajo and Apache, leading to the conclusion by some anthropologists that the migration of Athabaskan peoples into what is now the southwestern United States could have been due to the eruption. After that, the hunting technology saw the replacement of atlatls with bows and arrows. 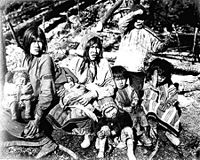 Estimates of population of Yukon at the beginning of the 19th century strongly differ. Historians earlier assumed that there lived 8000 people in the territory,[4] from 7000 to 8000 people,[5] or more than 9000 people.[6] Other estimates show that by 1830th year the number of indigenous people made 4700 people.[6]

Besides Athabaskan, on the Arctic coast of modern Yukon, including Herschel Island, there lived Inuit (Eskimo). And in the south, down the Teslin River there lived continental Tlingit (Teslin) whose language together with Athabaskan languages is included into Na-Dene language family.[8]

Covered with snow Mount Saint Elias in the extreme southwest of Yukon was unsettled.

European incursions into what later became the Yukon started in the first half of the 19th century with the fur trade. Hudson's Bay Company explorers and traders from Mackenzie River trading posts used two different routes to enter Yukon and created trading posts along the way. The northern route started in Fort McPherson, Northwest Territories along the Mackenzie River, crossed the mountains into the Bell and Porcupine Rivers to the Yukon River. The southern route started at Fort Liard, Northwest Territories, then westward along the Liard River to Frances Lake and then along the Pelly River to its juncture with Yukon River.

After establishing Fort McPherson, Northwest Territories, John Bell crossed the mountains into Yukon River watershed in 1845, and went down the Rat River (today the Bell River) to its confluence with the Porcupine River. After managing the fur trade at Fort McPherson, he returned to the Bell River, and followed the Porcupine to its juncture with Yukon River, the eventual site of Fort Yukon. Soon after, Alexander Hunter Murray established trading posts at Lapierre House (1846) and at Fort Yukon (1847) at the juncture of the Porcupine and Yukon Rivers. Murray drew numerous sketches of fur trade posts and of people and wrote the Journal of Yukon, 1847–48, which give valuable insight into the culture of local Gwich’in First Nation people at the time.

While the post was actually in Russian Alaska, the Hudson's Bay Company continued to trade there until expelled by the American traders in 1869, following the Alaska Purchase. A new trading post, Rampart House was established upstream along the Porcupine, but it also proved to be just inside Alaska's boundary. Gwich’in people, especially under the leadership of Sahneuti, played off the Hudson's Bay Company against American traders from the Alaska Commercial Company.

At about the same time, Robert Campbell, coming from Fort Simpson explored a large part of the southern Yukon and established Fort Frances (1842) on Frances Lake in the Liard River basin and Fort Selkirk, Yukon (1848) at the juncture of the Yukon River and the Pelly River. In 1852, Fort Selkirk was sacked by Tlingit warriors from the coast who objected to its interference with their trade. Fort Selkirk was abandoned and not reestablished until 1889.

In 1859, Robert Kennicott set off on an expedition to collect natural history specimens in what is now the Mackenzie River and Yukon River valleys and in the Arctic tundra beyond. Kenicott became popular with Hudson's Bay Company fur traders in the area and encouraged them to collect and send natural history specimens and First Nations artifacts to the Smithsonian. In 1865 the Western Union Telegraph Expedition was mounted to find a possible route for a telegraph line between North America and Russia by way of the Bering Sea. Kennicott was the chief scientist for this expedition and the party of naturalists sent to assist him included W.H. Dall. Kennicott died of a heart attack while travelling up the Yukon River. However, Kennicott's efforts brought what is now the Yukon to the world's attention.

Rumours of the presence of gold in the area had been reported by Hudson's Bay Company traders, but little had been done about them. Following the Alaska purchase and the abandonment of Rampart house, Alaska Commercial Company traders started working along the upper Yukon River. Three miners — Alfred Mayo, Jack McQuesten and Arthur Harper — having heard of these rumours, went to work for the Alaska Commercial Company as traders, although their main interest was in the gold prospects. In 1874, Mayo and McQuesten established Fort Reliance, a few miles downstream of what later became Dawson City. Miners and prospectors slowly trickled in, and gold was found in many areas but rarely in paying quantities.

In 1885, a paying amount of gold was found on the Stewart River, and McQuesten convinced the Alaska Commercial Company to start catering to miners rather than focusing only on the fur trade. The following year, paying quantities of coarse gold were found on the Fortymile River, and a new trading post, Forty Mile, Yukon was established at the confluence of the Fortymile with the Yukon River. 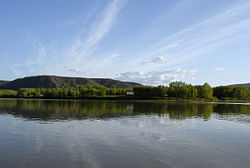 At the same time as the initial gold discoveries were being made, the US Army sent lieutenant Frederick Schwatka to reconnoiter the Yukon River. Going over the Chilkoot Pass, his party built rafts and floated down the Yukon River to its mouth in the Bering Sea, naming many geographic features along the way. Schwatka's expedition alarmed the Canadian government, who then sent an expedition under George Mercer Dawson in 1887. William Ogilvie, a surveyor who was later to become famous during the Klondike gold Rush and was part of Dawson's expedition, surveyed the boundary with Alaska.

In 1894, concerned about the influx of American miners and the liquor trade, the Canadian government sent inspector Charles Constantine of the North-West Mounted Police to examine conditions in the Yukon districts.

The Klondike Gold Rush was the seminal event in the Yukon's history. A party led by Skookum Jim Mason discovered gold in Bonanza Creek, a tributary of the Klondike River, in August 1896. An estimated 30,000 to 40,000 people braved numerous hardships to reach the Klondike gold fields in the winter and spring of 1897-1898 after the discovery became known in 1897. With the influx of American stampeders, the Canadian government decided to create a separate territory to better control the situation.

In 1901, after many had gone back, the Census put the population of the territory at 27,219, a figure that was not reached again until 1991. The influx of people greatly stimulated mineral exploration in other parts of the Yukon and led to two subsidiary gold rushes in Atlin, British Columbia and Nome, Alaska as well as a number of mini-rushes. Transportation needs to the gold fields led to the construction of the White Pass and Yukon Route.

Around the start of the 20th century the U.S. Army began the construction of a telegraph line which ran through Tanacross, crossing the Tanana River at a place called Tanana Crossing. The line continued northward, past the village of Ketchumstuck, and the forked, one branch going west to Fairbanks and the other to the military post at Eagle. The direct impact of the line was brief, however, since by 1915 the greater part was abandoned and by 1926 only 11 miles remained. In 1912 the Protestant Episcopal Church purchased the telegraph installation at Tanana Crossing and established St. Timothy's mission.

After the gold rush, the population of the territory declined precipitously, reaching a low of 4,157 in 1921 and remained fairly steady until the 1940s. This was despite the development of other mining areas including silver in Conrad, Yukon and especially near Mayo, gold in the Kluane Lake area, and copper near Whitehorse. In the Klondike, individual miners' claims were bought out and consolidated with the help of the government by a small number of companies, including the Guggenheim's Yukon Gold Corporation who used large floating dredges. The Yukon Consolidated Gold Company continued to dredge for gold until the 1960s. A brief period of prosperity ensued during the 1930s when the price of gold rose.

By 1920, the elected territorial council had been reduced to three members and the territory was directly ruled by the Gold commissioner, a federal civil servant reporting to the Minister of the Interior.

The next important event in Yukon's history was the construction of the Alaska Highway during the Second World War, which, after its badly needed reconstruction by the Canadian Government in the late 1940s, opened up the territory to road traffic. The Alaska Highway has played an extremely important role in the acculturation of the people. Today, the highway remains a scenic and well-maintained route throughout the year.[9] The war also saw the construction of a number of airfields as part of the Northwest Staging Route. However, the influx of southern highway construction crews had a devastating effect on some First Nations, who suffered from a large number of deaths from diseases to which they had no immunity.

Other highways were built during the 1950s and 1960s, resulting the decline and disappearance of the riverboats that had provided the main means of transportation until the 1960s. In the 1950s, the White Pass & Yukon Route pioneered the use of intermodal containerized shipping. Mining activity also revived, including copper mining in Whitehorse, silver and lead in Keno and Elsa, asbestos in Clinton Creek. The world's largest open-pit zinc and lead mine was opened in Faro in the early 1970s. Gold mining came back to the Klondike and other areas with the large rise in gold prices in the late 1970s.

In the 1980s and 1990s, mining declined and the role of government increased considerably with larger and larger transfers from the federal government. In 1978, party politics was introduced to the Yukon Legislative Assembly. In October 1979, responsible government was granted by Minister Jake Epp. On another front, First Nations started lobbying and entered in land claims negotiations in the 1970s which culminated in the signing of an "Umbrella Final Agreement" in 1992. Although most First Nations have signed agreements, land claims and self-government negotiations are still going on today. The First Nations are now considered a fourth level of government and the specific nature of inter-governmental relationships is still being worked out. Today, the Canadian government is investing in clean energy research and environmental protection in the territory, with one of the goals being the increased involvement of the First Nations, Inuit and Métis peoples in the northern economy.[10]