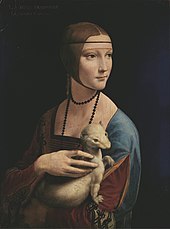 Cecilia Gallerani as The Lady with an Ermine, painted by Leonardo da Vinci around 1489. This painting exemplifies Italian fashion in the 15th century.

Italian fashion, art, music, and philosophy flourished during the Renaissance in Italy.[1][2] The cities of Venice, Milan, Florence, Naples, and Rome produced textiles such as velvet, silk, and wool.[3] Italian fashion grew in popularity and influence across Europe, and was preferred by one of the most powerful families in Italy, the Medicis of Florence.[4] In the 15th and 16th centuries, Italian fashion was influenced by the art of Michelangelo, Leonardo da Vinci, and Raphael.[5] Italian fashion was extravagant and expensive, crafted from velvet, brocade, ribbons, and jewels.

Women's styles during the Renaissance

In the 1460s, women's fashion shifted from high-necked gowns and braided hair wrapped around the head to layered V-shaped necklines and longer braids. Gathered and pleated skirts were popular.[6][7] Women's fashion at the time could be defined by one word: fullness. While men worked to accentuate the top portion of their bodies, women did the opposite. The top and bust area was always fitted and the waist was to be accentuated as the tiniest part of the body. Then the bottom half of the body would be made to look as full as possible, with extravagant and over the top skirts. Wide and puffed sleeves were the popular styles and wealthy women often had fur lined sleeves. Clothing was not about comfort or convenience, as women would typically wear about 5 layers on an everyday basis.Women's dresses consisted of fitted garments worn underneath a belted dress, also called giornea. Unlike the men's, the women's giornea covered their feet, and originally evolved from the houppelande (a long, full-skirted gown with a high collar).[8] The skirts were fitted around the waist and often pleated. Earlier dresses had a slit in the front that revealed the garment underneath, and later dresses had a slit on the side. Underneath the giornea, women wore a gamurra, a long dress that had a high waistline. Some had detachable sleeves. The undergarment was a plain linen dress, called a camicia. Women wore high heels called Pianelle. Heels were worn less for fashion at the time and more for functionality. Women wore heeled shoes to keep their dresses from dragging on the damp and dirty streets. 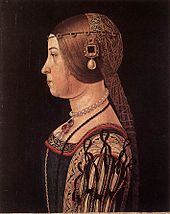 Hairstyles at the time were dependent on a woman's marital status. If a woman was single, she would wear her hair down, usually in loose curls. Once women were wed, they would begin wearing their hair up, in tight braids. Popular accessories for the hair:

Men's styles during the Renaissance

During the Italian Renaissance, men wore large, fitted waistcoats underneath pleated overcoats called giornea, which had wide, puffy mutton sleeves and were often made from brocade. Men wore hats like caps and berets. Men typically wore an overcoat called a cioppa, which had lining of a different color than the main fabric, a defining feature of fashion during the Italian Renaissance. Men typically wore hose or tights that emphasized their lower bodies. Men and women wore outer clothes with detachable and often slashed sleeves of varied designs. Wealthy people owned many different pairs of sleeves to match their overcoats and dresses.[6][7] The Renaissance changed societal attitudes toward clothing and appearance. Men in particular wanted to wear more fitted clothes to emphasize their body shape. Merchants expanded the market for apparel, and created complementary accessories such as hats, hairnets, bags, and gloves. The widespread use of mirrors, popular in Renaissance interior design and architecture, increased interest in self-image and fashion.

This headdress was worn by Venetians.The bonnet is a small, round or squared, brimless cap that was usually red or black and made of felt or velvet. It is unadorned and sometimes pinched in at the four corners. Slight variations in the bonnet's style were visible among the different social classes and professions. For church officials and university professors, the cap had four corners or the sign of the cross. For a doctor of divinity, the cap had three corners. The cornered cap evolved into today's square trencher or mortarboard university hat.

It was often worn over a velvet coif or gold cord net and sometimes attached to a wig. Caps for daily use were made out of cloth, while fancier bonnets were made out of luxurious materials like felt, velvet, satin, taffeta, scarceness (a thin silk) and straw in the summer. The decorations used for the beret were usually white, in untrimmed ostrich, peacock, marabou and wool imitation, and plumes. Feathers held with jeweled sockets with spangles and jewels would often be sewn onto the spine. Brooches with sacred motifs were also used for decoration. Small gold ornaments in bowknots, rings, and buttons were sewn to the underside of the brim.

It was common for men in the 16th century to have a clean-shaven face along with a straight or crimped bob. Long bangs of natural hair or silk wigs were fashionable, as well. Francois I started the trend of short hair and beards in the Italians and the Swiss, after accidentally cutting his hair. In the 1560s, starch was invented and men started to starch their beards. From the 1570s to 1590s, men brushed the front of their hair up off their foreheads. For elegant events or occasions, men wore wigs to conceal their baldness. They would wear tilted berets attached to a wig instead of a coif. Wigs were made out of real hair.

Prior to 1500, there were no rules about the color of the clerical dress. However, due to a decision in 1565 in Milan, black became the accepted color in Italy. While white remained as the pope's biretta color, scarlet was accepted by the Cardinals, purple by the bishops, and black by the clerics.

In the 17th century, Italian fashion fell into a decline, while Spain, England, and France led the industry. In Europe, French fashion was most popular. The fashion industry remained active in Italy, especially in Rome, Milan, and Florence. In the mid-19th century, cheaper silk was imported to Milan from Asia because the phylloxera pest infestation damaged silk and wine produced in Italy. After industrialization, metal, mechanical, and furniture manufacturing replaced textile production. Some of the first modern Italian fashion designers, such as Bulgari, Prada, Gucci, and Ferragamo, were founded in the late 19th and early 20th centuries. In the 1950s and 1960s, Italian fashion regained popularity worldwide.

A dress made by Valentino for Audrey Hepburn.

On February 12, 1951, the Italian businessman Giovanni Battista Giorgini held a fashion show in Florence to make Italy an international leader in fashion design.[9] Prior to his soirées in 1951 to 1953, Italy had begun exporting luxury fashion goods and handbags to other nations, including the United States.

In the 1960s, the handbags produced by the designer Gucci drew the attention of celebrities such as Grace Kelly, Peter Sellers, Audrey Hepburn and the First Lady of the United States, Jackie Kennedy. Gucci's "GG" monogram logo became synonymous with Hollywood fashion.[10] Jackie Kennedy developed a close friendship with the Italian designer Valentino Garavani, and wore his designs ever since 1965, including at her wedding to Aristotle Onassis. Florence was Italy's fashion capital in the 1950s and 1960s, and Milan in the 1970s and 1980s, with Versace, Armani, and Dolce & Gabbana opening up their first boutiques there. Until the 1970s, Italian fashion primarily served the wealthy, similar to haute couture in France.

In the 1970s and 1980s, Italian fashion started to concentrate on ready-to-wear clothes, such as jeans, sweaters, and miniskirts. Milan had more affordable styles for shoppers, and Florence was no longer considered the fashion capital of Italy. New clothing labels, such as Miu Miu[11] and Geox, started to appear worldwide in the 1990s. Many celebrities, such as Beyoncé, Axl Rose, Elton John, Naomi Campbell, Elizabeth Hurley, Lady Gaga, Victoria Beckham, Madonna, Britney Spears, Rihanna, Alexandra Burke, Christina Aguilera, and even Diana, Princess of Wales,[12] were clients of Italian fashion designers.

Milan and Rome are important internationally in the fashion industry, along with Tokyo, Los Angeles, London, Paris and New York.[13] Venice, Florence, Naples, Bologna, Genoa, and Turin are other important centers of fashion. Italy's main shopping districts are the Via Montenapoleone fashion district in Milan, the Galleria Vittorio Emanuele in Milan, Via dei Condotti in Rome, Via de' Tornabuoni in Florence, and Chiaia in Naples.