The history of Brasília, the centrally located capital of Brazil, started with discussions in the eighteenth century. The name Brasília was first proposed in 1822, but construction only began in 1956, following the election of Juscelino Kubitschek as President of Brazil. Its official declaration as a city dates to 21. April 1960, and the process of moving the federal government offices started on that date.

President Juscelino Kubitschek ordered the construction of Brasília, fulfilling an article of the country's constitution dating back to 1891 stating that the capital should be moved from Rio de Janeiro to a place close to the center of the country. The building of the new capital also fulfilled a campaign promise of Kubitschek. The plan was originally conceived in 1827 by José Bonifacio, an advisor to Emperor Pedro I, who presented a plan to the General Assembly for a new city called Brasilia with the initial idea of moving the capital further westward from the already heavily populated southeastern corridor. The bill was not enacted because Emperor Pedro I dissolved the Assembly.

Lúcio Costa won a contest and was the main urban planner. Oscar Niemeyer, a close friend of Lúcio's, was the chief architect of most public buildings and Roberto Burle Marx was the landscape designer. Brasília was built in 41 months, from 1956 to April 21, 1960, when it was officially inaugurated. From 1763 to 1960, Rio de Janeiro was the capital of Brazil. At this time, resources tended to be centered in Brazil's southeast region near Rio de Janeiro. Brasília's geographically more central location made for a more regionally neutral federal capital. The idea of locating the capital in the center of Brazil was first suggested in 1891 but was not defined until 1922. 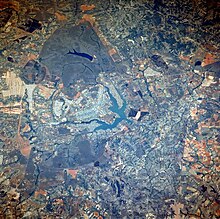 Right from the beginning, the growth of Brasília exceeded expectations. Until the 1980s, the governor of the Distrito Federal was appointed by the Federal Government, and the laws of Brasília were issued by the Brazilian Federal Senate. After the Constitution of 1988, Brasília gained the right to elect its Governor, and a District Assembly (Câmara Distrital) was elected to exercise legislative power.