The Batswana, a term also used to denote all citizens of Botswana, refers to the country's major ethnic group (called the Tswana in Southern Africa). Prior to European contact, the Batswana lived as herders and farmers under tribal rule.

In October 2019, researchers reported that Botswana was the birthplace of all modern humans about 200,000 years ago.[1][2] Sometime between 200-500 AD, the Bantu-speaking people who were living in the Katanga area (today part of the DRC and Zambia) crossed the Limpopo River, entering the area today known as South Africa as part of the Bantu expansion.[3]

There were 2 broad waves of immigration to South Africa; Nguni and Sotho-Tswana. The former settled in the eastern coastal regions, while the latter settled primarily in the area known today as the Highveld—the large, relatively high central plateau of South Africa.

By 1000 AD the Bantu colonization of the eastern half of South Africa had been completed (but not Western Cape and Northern Cape, which are believed to have been inhabited by Khoisan people until Dutch colonisation). The Bantu-speaking society was highly a decentralized feudal society organized on a basis of kraals (an enlarged clan), headed by a chief, who owed a very hazy allegiance to the nation's head chief. According to Neil Parsons's online "Brief History of Botswana":

"From around 1095 south-eastern Botswana saw the rise of a new culture, characterized by a site on Moritshane hill near Gabane, whose pottery mixed the old western style with new Iron Age influences derived from the eastern Transvaal (Lydenburg culture). The Moritsane culture is historically associated with the Khalagari (Kgalagadi) chiefdoms, the westernmost dialect-group of Sotho (or Sotho-Tswana) speakers, whose prowess was in cattle raising and hunting rather than in farming.

“In east-central Botswana, the area within 80 or 100 kilometres of Serowe (but west of the railway line) saw a thriving farming culture, dominated by rulers living on Toutswe hill, between about 600-700AD and 1200-1300AD. The prosperity of the state was based on cattle herding, with large corrals in the capital town and in scores of smaller hill-top villages. (Ancient cattle and sheep/goat corrals are today revealed by characteristic grass growing on them.) The Toutswe people were also hunting westwards into the Kalahari and trading eastwards with the Limpopo. East coast shells, used as trade currency, were already being traded as far west as Tsodilo by 700AD.

“The Toutswe state appears to have been conquered by its Mapungubwe state neighbour, centred on a hill at the Limpopo-Shashe confluence, between 1200AD and 1300AD. Mapungubwe had been developing since about 1050 AD because of its control of the early gold trade coming down the Shashe, which was passed on for sale to sea traders on the Indian Ocean. The site of Toutswe town was abandoned, but the new rulers kept other settlements going - notably Bosutswe, a hill-top town in the west, which supplied the state with hunting products, caught by Khoean hunters, and with Khoesan cattle given in trade or tribute from the Boteti River. But Mapungubwe's triumph was short-lived, as it was superseded by the new state of Great Zimbabwe, north of the Limpopo River, which flourished in control of the gold trade from the 13th to the 15th centuries. It is not known how far west the power of Great Zimbabwe extended. Certainly its successor state, the Butua state based at Kame near Bulawayo in western Zimbabwe from about 1450 onwards, controlled trade in salt and hunting dogs from the eastern Makgadikgadi pans, around which it built stone- walled command posts." 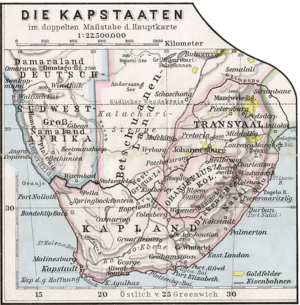 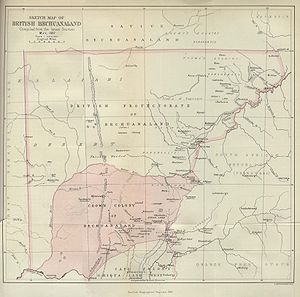 A map of 1887 showing the Protectorate and British Bechuanaland

Modern Botswana. The country's borders have been stable since independence in 1966

In the late 19th century, hostilities broke out between the Shona inhabitants of Botswana and Ndebele tribes who were migrating into the territory from the Kalahari Desert.[5] Tensions also escalated with the Boer settlers from the Transvaal. After appeals by the Batswana leaders Khama III, Bathoen I, and Sebele I, who personally travelled to London, for assistance, the British Government on 31 March 1885 put "Bechuanaland" under its protection. The northern territory remained under direct administration as the Bechuanaland Protectorate and is today's Botswana, while the southern territory became part of the Cape Colony and is now part of the northwest province of South Africa; the majority of Setswana-speaking people today live in South Africa. The Tati Concessions Land, formerly part of the Matabele kingdom, was administered from the Bechuanaland Protectorate after 1893, to which it was formally annexed in 1911.

When the Union of South Africa was formed in 1910 out of the main British colonies in the region, the Bechuanaland Protectorate, Basutoland (now Lesotho), and Eswatini (the "High Commission Territories") were not included, but provision was made for their later incorporation. However, a vague undertaking was given to consult their inhabitants, and although successive South African governments sought to have the territories transferred, Britain kept delaying, and it never occurred. The election of the National Party government in 1948, which instituted apartheid, and South Africa's withdrawal from the Commonwealth in 1961, ended any prospect of incorporation of the territories into South Africa.[6]

An expansion of British central authority and the evolution of tribal government resulted in the 1920 establishment of two advisory councils representing Africans and Europeans. Proclamations in 1934 regularized tribal rule and powers. A European-African advisory council was formed in 1951, and the 1961 constitution established a consultative legislative council.[7]

All citizens of Botswana-regardless of colour, ancestry or tribal affiliation are known as Batswana (plural) or Motswana (singular). In the lingua franca of Tswana, tribal groups are usually denoted with the prefix 'ba', which means 'the people of...'.Therefore, the Herero are known as Baherero, and the Kgalagadi as Bakgalagadi, and so on. Botswana's eight major tribes are represented in the house of chiefs, the country's second legislative body.[10]

The Tswana are the largest ethnic group in Botswana[11]. 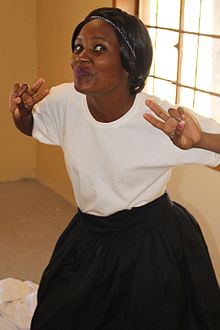 Botswana's second largest ethic group are the Bakalanga, who mainly live in northeastern Botswana and Western Zimbabwe and speak Kalanga. In Botswana they are based mainly, although not exclusively, around Francistown. Modern Bakalanga are descended from the Kingdom of Butua.[12] 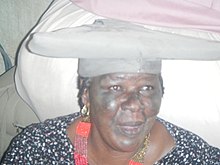 The Herero probably originated from the eastern or central Africa and migrated across the Okavango River into northeastern Namibia in the early 16th century. In 1884 the Germans took possession of German south west Africa (Namibia) and systematically appropriated Herero grazing lands. The ensuing conflict between the Germans and the Herero was to last for years, only ending in a calculated act of genocide which saw the remaining of the tribe flee across the border into Botswana. The refugees settled among the Batawana and were initially subjugated, but eventually regained their herds and independence. These days the Herero are among the wealthiest herders in Botswana.[13]

The Basubiya, Wayeyi and Mbukushu are all riverine peoples scattered around the Chobe and Linyanti rivers and across the Okavango pan-handle. Their histories and migrations are a text book example of the ebb and flow of power and influence. For a long time, the Basubiya were the dominant force, pushing the wayeyi from the Chobe river and into the Okavango after a little spat over a lion skin, so tradition says. The Basubiya were agriculturists and as such proved easy prey for the growing Lozi Empire (from modern Zambia), which in turned collapsed in 1865. They still live in the Chobe district.

Originally from the same areas in Namibia and Angola as the Mbukushu, the Wyeyi moved south from the Chobe river into the Okavango Delta in the mid-18 century to avoid the growing conflict with the Basubiya.[14]