Roman hippodrome in the ancient city of Aphrodisias, Turkey

The hippodrome (Greek: ἱππόδρομος) was an ancient Greek stadium for horse racing and chariot racing. The name is derived from the Greek words hippos (ἵππος; "horse") and dromos (δρόμος; "course"). The term is used in the modern French language and some others, with the meaning of "horse racecourse". Hence, some present-day horse-racing tracks also include the word "hippodrome"[1] in their names, such as the Hippodrome de Vincennes and the Central Moscow Hippodrome.

The Greek hippodrome was similar to the Roman circus. The hippodrome was not a Roman amphitheatre, which was used for spectator sports, games, and displays, or a Greek or Roman semicircular theatre used for theatrical performances.

The Greek hippodrome was usually set out on the slope of a hill, and the ground taken from one side served to form the embankment on the other side. One end of the hippodrome was semicircular, and the other end square with an extensive portico, in front of which, at a lower level, were the stalls for the horses and chariots. At both ends of the hippodrome were posts (termai) that the chariots turned around. This was the most dangerous part of the track, and the Greeks put an altar to Taraxippus (disturber of horses) there to show the spot where many chariots wrecked.

A large ancient hippodrome was the Hippodrome of Constantinople, built between AD 203 and 330. However, since it was built to a Roman design, it was actually a circus. 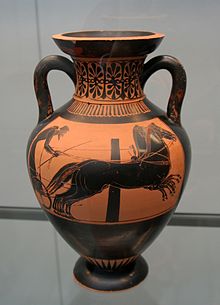 Biga chariot rounding a terma: Attic black-figure amphora, circa 500 BC, found at Vulci