Hinduism is a minority religion in Thailand followed by 0.03% of its population.[1] Despite being a Buddhist majority nation, Thailand has a very strong Hindu influence.The popular Thai epic Ramakien is based on the Ramayana.[2] The Emblem of Thailand depicted Garuda who is the vahana of Vishnu.[3] 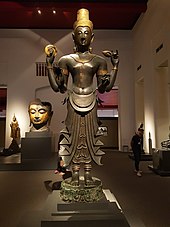 The Sukhothai Vishnu at the Bangkok National Museum, circa 14th century, found at the Sukhothai Historical Park.

A number of Hindus remain in Thailand. They are mostly located in the cities. In the past, the nation came under the influence of the Khmer Empire, which had strong Hindu roots. Despite the fact that today Thailand is a Buddhist majority nation, many elements of Thai culture and symbolism demonstrates Hindu influences and heritage. For example, the popular epic, Ramakien, is based on the Ramayana.[4] The Royal emblem of Thailand depicted Garuda, the vahana (vehicle) of Vishnu.[5]

The Thai city, Ayutthaya near Bangkok, is named after Ayodhya, the birthplace of Rama. Numerous rituals derived from Brahmanism are preserved in rituals, such as the use of holy strings and pouring of water from conch shells. Furthermore, Hindu deities are worshipped by many Thais alongside Buddhism, such as Brahma at the famous Erawan Shrine, and statues of Ganesh, Indra, and Shiva, as well as numerous symbols relating to Hindu deities are found, e.g., Garuda, a symbol of the monarchy. Reliefs in temple walls, such as the 12th-century Prasat Sikhoraphum near Surin (Thailand), show a dancing Shiva, with smaller images of Parvati, Vishnu, Brahma and Ganesha.[6]

The Devasathan is a Hindu temple established in 1784 by King Rama I. The temple is the centre of Brahminism in Thailand. The royal court Brahmins operate the temple, they perform several royal ceremonies per year.

A murti of Brahma in Chiang Mai, Thailand

An annual Giant Swing ceremony known as Triyampavai-Tripavai was held in major cities of Thailand until 1935, when it was abolished for safety reasons.[7] The name of the ceremony was derived from the names of two Tamil language Hindu chants: Thiruvempavai and Thiruppavai. It is known that Tamil verses from Thiruvempavai — poet pratu sivalai ("opening the portals of Shiva's home") — were recited at this ceremony, as well as the coronation ceremony of the Thai king.[8] According to T.P. Meenakshisundaram, the name of the festival indicates that Thiruppavai might have been recited as well.[9] The swinging ceremony depicted a legend about how the god created the world. Outside shops, particularly in towns and rural areas, statues of Nang Kwak as the deity of wealth, fortune and prosperity (version of Lakshmi) are found.[10][11]

The elite, and the royal household, often employ Brahmins to mark funerals and state ceremonies such as the Royal Ploughing Ceremony to ensure a good harvest. The importance of Hinduism cannot be denied, even though much of the rituals has been combined with Buddhism.[12] 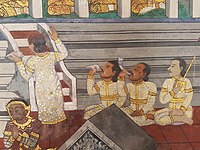 Thailand has two ethnic Thai Brahmin communities-Brahm Luang (Royal Brahmins) and Brahm Chao Baan (folk Brahmins). The Brahm Luang (Royal Brahmins) mainly perform royal ceremonies of the Thai King. They belong to the long family bloodline of Brahmins in Thailand. The Brahm Chao Baan or folk Brahmins are the category of Brahmins who are not from a bloodline of priests. Generally, these Brahmins have a small knowledge about the rituals and ceremonies. The Devasathan is the centre of Brahmin activity in Thailand. It was built more than 200 years ago. Apart from this there are also Indian Brahmins from India who migrated to Thailand.[14]

During the Sukhothai and Ayutthaya periods, evidence of the presence of sizable number of Indians in the Thai court is described by a number of western travelers. However most of the contemporary Indians came to Thailand after 1920, and during the first half of the 19th century.[15]

The Mariamman Temple, Bangkok is the first temple built in the South Indian architecture.It was built in 1879 by Vaithi Padayatchi,a Tamil Hindu immigrant.[16][17][18]