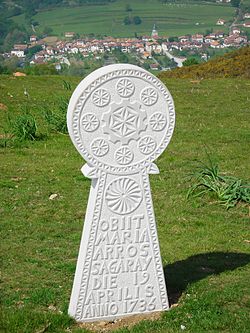 Hilarri (from Basque hil 'dead' and harri 'stone') is the name given to disk-shaped funerary steles that are typical of the Basque Country.

These funerary steles present a disc-shaped head facing the rising sun on a trapezoidal stand. They belong to an old tradition throughout all of the Western Mediterranean, which includes parts of Europe and North Africa, but today they are mainly found in the Basque Country.

The disc may be decorated by:

A smaller rosette, a Christian cross or a text may be added on the stand.

Geometric symbols are regularly distributed on the disc within 4 or 8 circle sectors. The quarters are often delimited by a cross as:

They may be very simple or well worked. Sometimes, a diagonal secondary cross completes the figure.

Each sector is decorated with various small decorative symbols such as stars, moons, potent crosses or rosettes. They may be different in each sector. Sometimes, depictions of tools point out the trade of the deceased, whose name is seldom mentioned. Stylized hands open upwards may also be found.

A figure with 6 loops.

Many steles are decorated by single rosettes. In this case the order of symmetry is often 6. The most frequent figures are:

Some figures are designed to give an idea of rotation, generally clockwise, a sense which is often analyzed as positive. The most popular figures are :

One Navarrese hilarri presents a kind of lauburu made of four walking legs. This motive cannot be considered as usual in the Basque Country.

Some more specific figures can be encountered as:

They are all identified with Christ as the sun rising after Resurrection, evident also in Basque church symbols and the imagery of Loyola's Jesuit Order.

The surrounding of the disc is often decorated, giving an impression of a shining sun.

Many innovative ornamentations can be observed in modern hilarris. As an example, in Zuberoa, the traditional song "Orhiko txoria" (the bird of Orhy) has led to many representations of a bird flying towards this emblematic mountain. Others have seen connections to a prehistoric solar cult arriving with the Mauri or Jentillak and related to the Egyptian Horus, consort or manifestation of the Ishtar (the star) of Fertility among the desert and Sea People.