Resident (title) Resident commissioner Ambassador
For the film known as The High Commissioner, see Nobody Runs Forever.
Title of various high-ranking, special executive positions held by a commission of appointment

High commissioner is the title of various high-ranking, special executive positions held by a commission of appointment.

The English term is also used to render various equivalent titles in other languages. 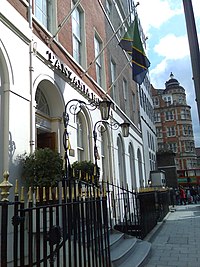 The Tanzanian High Commission in London. Tanzania and the United Kingdom are both members of the Commonwealth of Nations.
Main article: High commissioner (Commonwealth)

Historically, in the British Empire (most of which would become the Commonwealth) high commissioners were envoys of the Imperial government appointed to manage protectorates or groups of territories not fully under the sovereignty of the British Crown, while Crown colonies (which were British sovereign territory) would normally be administered by a Governor and the most significant possessions, large confederations and the independent Commonwealth Dominions would be headed by a Governor-General.

An example was the island of Cyprus. Until 12 July 1878, Cyprus was under the Ottoman rule based in Istanbul. From that date, it was under British administration, but Istanbul retained nominal sovereignty until Cyprus was fully annexed by Britain on 5 November 1914. There were nine successive High Commissioners, all but one already knighted, from 22 July 1878 until on 10 March 1925. Cyprus became a crown colony, and the last incumbent stayed on as its first Governor.

The High Commissioners for Palestine and Transjordan, who administered Mandatory Palestine, had a considerable effect on the history of Zionism and the early stages of what would become the Israeli–Palestinian conflict.

A high commission could also be charged with the last phase of a decolonisation, as in the crown colony of the Seychelles, granted autonomy on 12 November 1970: the last governor, Colin Hamilton Allen (1921–1993) stayed on as the only colonial high commissioner from 1 October 1975, when self-rule under the Crown was granted, until 28 June 1976 when the Seychelles became an independent republic within the Commonwealth.

The role of High Commissioner for Southern Africa was coupled with that of British Governor of the Cape Colony in the 19th century, giving the colonial administrator responsibility both for administering British possessions and relating to neighbouring Boer settlements. The best known of these high commissioners, Alfred Milner who was appointed to both positions in the 1890s, is considered responsible by some for igniting the Second Boer War.

Historically, in southern Africa, the protectorates of Bechuanaland (now Botswana), Basutoland (now Lesotho) and Swaziland (now Eswatini) were administered as High Commission Territories by the Governor-General of South Africa, who was also the British High Commissioner for Bechuanaland, Basutoland, and Swaziland, until the 1930s, with various local representatives, and subsequently by the British High Commissioner (from 1961 Ambassador) to South Africa, who was represented locally in each territory by a resident commissioner.

The British Governor of the crown colony of the Straits Settlements, based in Singapore, doubled as High Commissioner of the Federated Malay States, and had authority over the Resident-General in Kuala Lumpur, who in turn was responsible for the various Residents appointed to the native rulers of the Malay states under British protection.

The British Western Pacific Territories were permanently governed as a group of minor insular colonial territories, under one single part-time Western Pacific High Commissioner (1905–1953), an office attached first to the governorship of Fiji, and subsequently to that of the Solomon Islands. He was represented in each of the other islands units by a Resident Commissioner, Consul (representative) or other official (on tiny Pitcairn a mere Chief Magistrate).

Currently there is still one high commissioner who also serves in an additional capacity as a governor: the British High Commissioner to New Zealand serves ex officio as British colonial Governor of the Pitcairn Islands.

In the (post-)colonial sense, some other powers have or previously had high commissioners, or rather the exact equivalent in their language.

In the Kingdom of Denmark, High Commissioners (Danish: Rigsombudsmanden, Faroese: Ríkisumboðsmaðurin, Greenlandic: Naalagaaffiup Sinniisaa) represent the crown and the Kingdom Government (Regeringen) in Greenland and the Faroe Islands (two self-governing regions of the kingdom – The unity of the Realm) and take part in negotiations on policies and decisions affecting their region including negotiations with the devolved legislatures and the Kingdom Parliament (Folketinget). Greenland and the Faroe Islands have one Commissioner each.

Originally the French word Haut Commissaire, or in full Haut Commissaire de la république (High Commissioner of the Republic), was rarely used for governatorial functions, rather (Lieutenant-)gouverneur(-général) and various lower titles. Exceptions were:

In the later period of decolonisation, the office of High Commissioner in a colony to become an allied nation was intended to become remarkably analogous to the Commonwealth's 'close relationship diplomats' in President General De Gaulle's project for a French Union to match the Commonwealth, but it soon started to fall apart, so they actually just presided over most of the peaceful decolonisation.

While the colonies above were generally artificially carved creations, Haut commissaires also were appointed by Paris to prepare the (de facto) independence of pre-existing monarchies that had formally been French protectorates, such as:

Yet a colony could achieve independence without a High Commissioner, e.g. Guinée (French Guinea).

In one case a French Haut Commissaire was the exact match and colleague of a British High Commissioner: they represented both powers in the south sea condominium (i.e. territory under joint sovereignty) of the New Hebrides, which became the present republic of Vanuatu. The current High Commissioner of Vanuatu to the US [5 February 2009] is David J. Wilson (born 1956).

A very special category was the Haut Commissaire as 'liquidator' of a gouvernement-général (the colonial echelon grouping several neighbouring colonies under a Governor-general), notably:

Another use for the title was found in the rare remaining insulara (formerly no longer colonial) overseas possessions, in these cases still functioning:

In early May 1919, the Kingdom of Greece was given a mandate by the Supreme Allied War Council for the city of Smyrna (Izmir) and its hinterland, which it proceeded to occupy on 12 May. A civilian administration was set up in the "Smyrna Zone", headed, from 21 May 1919 until 9 September 1922, when Greece lost Smyrna to Turkey, by the High Commissioner (Greek: Ὕπατος Ἁρμοστὴς) Aristeidis Stergiadis (1861–1950).

Alto comisario was the Spanish title of the official exercing the functions of a governor in the following colonial possessions:

The title Alto Comisario was also used for the representative of Spain in its protectorate zone within the Sherifan sultanate of Morocco (most of the country was under French protectorate), known as el Jalifato after the khalifa (Jalifa in Spanish), the Sultan's fully mandated, princely Viceroy in this protectorate, to which the High Commissioner was formally accredited, but whose senior he was in reality. In 1934–1956 the Governors of the Western Sahara (which from 27 November 1912 were also Governors-general of Spanish West Africa) were subordinated to him. The office itself was however filled by the governors of Spanish West Africa from 1939 to 1956.

In many cases, a political vacuum created by war, occupation or other events discontinuing a country's constitutional government has been filled by those able to do so, one nation or often an alliance, installing a transitional (often minimal) governance administered by, or under supervision of, one or more High Commissioners representing it/them.

After the naval blockade of Crete in 1898 by France, Italy, Russia and the United Kingdom, Crete became an autonomous state within the Ottoman Empire. These protecting powers appointed the following as High Commissioner (Greek: Ὕπατος Ἁρμοστὴς) until 1908, when the Cretan Assembly unilaterally declared union with Greece (with Crete subsequently formally becoming part of Greece in 1913, after the Balkan Wars):

Following the capitulation of the Ottoman Empire in the Armistice of Mudros, on 8 December 1918 the Allies occupied the shores of the Bosporus, the Dardanelles, the eastern coast of the Sea of Marmara up to 15 km deep, the islands of Imbros, Lemnos, Samothrace and Tenedos. The entire area demilitarised (Zone of the Straits). This was complemented in 16 March – 10 August 1920 as the allies occupied the Ottoman capital Constantinople (Istanbul). Until the termination of Allied occupation on 22 October 1923, there were at all times one British Senior Allied High Commissioner and one (junior) Allied High Commissioner (incumbents from France, thrice, Italy and the US, each twice).

Often the main/locally concerned members of an alliance would not set up a joint occupation authority (as in Italy after the Nazi defeat) but simply each appoint one for each of the zones into which they physically divided amongst themselves an occupied state or territory, e.g. after World War II:

As the 'world community' became a widely accepted ideal in diplomacy and was embodied first in the League of Nations and later the United Nations, these often came to play a key role in extraordinary situations that would earlier probably have been dealt with by states as above, sometimes reflected in the appointment of High Commissioners under their auspices, sometimes just from the same leading powers, sometimes rather from 'neutral' member states.

The title of High Commissioner was specifically used for the administrators during the 'emancipation from colonial rule' of League of Nations mandates and United Nations Trust Territories, i.e. non-sovereign states under a 'transitional' regime established under the authority of the League of Nations or the UN, respectively, to prepare them for full independence.

These 'guardianships' most often were simply awarded to the former colonial power or if that was a loser in the preceding World War, to the 'liberating' Allied victor(s). The trust territories have all now attained self-government or independence, either as separate nations or by joining neighbouring independent countries.

At the United Nations and affiliated global organisations, a High Commissioner serves as the permanent chief executive of a commission composed of representatives of various member nations.

Organization for Security and Co-operation in Europe