The BLAST high-altitude balloon just before launch on June 12, 2005

The most common type of high-altitude balloons are weather balloons. Other purposes include use as a platform for experiments in the upper atmosphere. Modern balloons generally contain electronic equipment such as radio transmitters, cameras, or satellite navigation systems, such as GPS receivers.

These balloons are launched into what is termed "near space", defined as the area of Earth's atmosphere between the Armstrong limit (18–19 km (11–12 mi) above sea level), where pressure falls to the point that a human being could not survive without a pressurised suit, and the Mesopause (85 km (53 mi) above sea level), where astrodynamics must take over from aerodynamics in order to maintain flight.

Due to the low cost of GPS and communications equipment, high-altitude ballooning is a popular hobby, with organizations such as UKHAS assisting the development of payloads.[2][3] 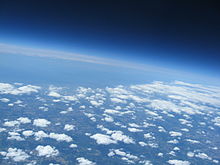 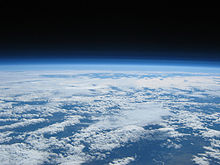 In France during 1783, the first public experiment with hydrogen-filled balloons involved Jacques Charles, a French professor of physics, and the Robert brothers, renowned constructors of physics instruments.

Charles provided large quantities of hydrogen, which had only been produced in small quantities previously, by mixing 540 kg (1,190 lb) of iron and 270 kg (600 lb) of sulfuric acid. The balloon, called Charlière, took 5 days to fill and was launched from Champ de Mars in Paris where 300,000 people gathered to watch the spectacle. The balloon was launched and rose through the clouds. The expansion of the gas caused the balloon to tear and it descended 45 minutes later 20 km (12 mi) away from Paris.[4]

Manned high-altitude balloons were used from the 1930s to 1960s for research and in seeking flight altitude records.[5] Notable manned high altitude balloon flights include three records set for highest skydive, the first set by Joseph Kittinger in 1960 at 31,300m for Project Excelsior, followed by Felix Baumgartner in 2012 at 38,969m for Red Bull Stratos and most recently Alan Eustace in 2014 at 41,419m.

Unmanned high-altitude balloons are used as research balloons. Common uses include weather balloons, as well as atmospheric and climate research. They are also widely used to collect data and imagery from near space. High-altitude ballooning is used for scientific applications such as submillimetre astronomy.

High-altitude balloons are often flown by students and by amateur groups to altitudes on the order of 30,000 m (98,000 ft) for both scientific and educational purposes,[2][3][9][10] and have become popular among educational institutions and enthusiasts as they do not require many resources for conducting launch.[11]

Testing radio range is often a large component to these hobbies. Amateur radio is often used with packet radio to communicate with 1200 baud, using a system called Automatic Packet Reporting System back to the ground station. Smaller packages called micro or pico trackers are also built and run under smaller balloons. These smaller trackers have used Morse code, Field Hell, and RTTY to transmit their locations and other data.[12]

The first recorded amateur radio high-altitude balloon launches are recorded to have taken place in Finland by the Ilmari program on May 28, 1967, and in Germany in 1964.[13]

Amateur radio high-altitude ballooning (ARHAB) is the application of analog and digital amateur radio to weather balloons and was the name suggested by Ralph Wallio (amateur radio callsign W0RPK) for this hobby. Often referred to as "The Poorman's Space Program", ARHAB allows amateurs to design functioning models of spacecraft and launch them into a space-like environment. Bill Brown (amateur radio callsign WB8ELK) is considered to have begun the modern ARHAB movement with his first launch of a balloon carrying an amateur radio transmitter on 15 August 1987.

An ARHAB flight consists of a balloon, a recovery parachute, and a payload of one or more packages. The payload normally contains an amateur radio transmitter that permits tracking of the flight to its landing for recovery. Most flights use an Automatic Packet Reporting System (APRS) tracker which gets its position from a Global Positioning System (GPS) receiver and converts it to a digital radio transmission. Other flights may use an analog beacon and are tracked using radio direction finding techniques. Long duration flights frequently must use high frequency custom built transmitters and slow data protocols such as radioteletype (RTTY), Hellschreiber, Morse code and PSK31, to transmit data over great distances using little battery power. Use of amateur radio transmitters on an ARHAB flight requires an amateur radio license, but non-amateur radio transmitters are possible to use without a license.

In addition to the tracking equipment, other payload components may include sensors, data loggers, cameras, amateur television (ATV) transmitters or other scientific experiments. Some ARHAB flights carry a simplified payload package called BalloonSat.

A typical ARHAB flight uses a standard latex weather balloon, lasts around 2–3 hours, and reaches 25–35 km (16–22 mi) in altitude. Experiments with zero-pressure balloons, superpressure balloons, and valved latex balloons have extended flight times to more than 24 hours. A zero-pressure flight by the Spirit of Knoxville Balloon Program in March 2008 lasted over 40 hours and landed off the coast of Ireland, over 5,400 km (3,400 mi) from its launch point. On December 11, 2011, the California Near Space Project flight number CNSP-11 with the call sign K6RPT-11 launched a record-breaking flight traveling 6,236 mi (10,036 km) from San Jose, California, to a splashdown in the Mediterranean Sea. The flight lasted 57 hours and 2 minutes. It became the first successful U.S. transcontinental and the first successful transatlantic amateur radio high-altitude balloon.[14][15][16][17] Since that time, a number of flights have circumnavigated the Earth using superpressure plastic film balloons. [18][19]

Each year in the United States, the Great Plains Super Launch (GPSL) hosts a large gathering of ARHAB groups.

Balloon Experiments with Amateur Radio (BEAR) is a series of Canadian-based high-altitude balloon experiments by a group of Amateur Radio operators and experimenters from Sherwood Park and Edmonton, Alberta. The experiments started in the year 2000 and continued with BEAR-9 in 2012, reaching 36.010 km (22.376 mi).[20][21] The balloons are made of latex filled with either helium or hydrogen. All of the BEAR payloads carry a tracking system comprising a GPS receiver, an APRS encoder, and a radio transmitter module. Other experimental payload modules include an Amateur Radio crossband repeater, and a digital camera, all of which is contained within an insulated foam box suspended below the balloon. 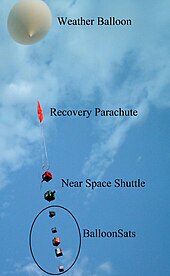 Image of five BalloonSats shortly after launch on an ARHAB flight.

A BalloonSat is a simple package designed to carry lightweight experiments into near space.[22] They are a popular introduction to engineering principles in some high school and college courses. BalloonSats are carried as secondary payloads on ARHAB flights. One reason BalloonSats are simple is because they do not require the inclusion of tracking equipment; as secondary payloads, they already are being carried by tracking capsules.

Space Grant started the BalloonSat program in August 2000. It was created as a hands on way to introduce new science and engineering students interested in space studies to some fundamental engineering techniques, team working skills and the basics of space and Earth science. The BalloonSat program is part of a course taught by Space Grant at the University of Colorado at Boulder.[23]

Often the design of a BalloonSat is under weight and volume constraints. This encourages good engineering practices, introduces a challenge, and allows for the inclusion of many BalloonSats on an ARHAB flight. The airframe material is usually Styrofoam or Foamcore, as they are lightweight, easy to machine, and provide reasonably good insulation. 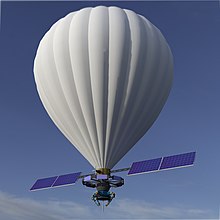 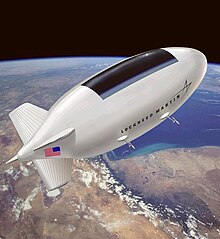 Geostationary balloon satellites (GBS) are proposed high-altitute balloons that would float in the stratosphere (60,000 to 70,000 feet (18 to 21 km) above sea level) at a fixed point over the Earth's surface and thereby act as atmosphere analogues to satellites. At that altitude, air density is 1/10 of what it is at sea level. The average wind speed at these levels is less than that at the surface.[citation needed] A propulsion system would allow the balloon to move into and maintain its position. The GBS would be powered with solar panels en route to its location and then receive laser power from a cell tower it hovers over.

A GBS could be used to provide broadband Internet access over a large area. Laser broadband would connect the GBS to the network, which could then provide a large area of coverage because of its wider line of sight over the curvature of the Earth and unimpeded Fresnel zone.[24][25][26]