Heraklion or Iraklion (/hɪˈrækliən/; Greek: Ηράκλειο, Irákleio, pronounced [iˈraklio])[3] is the largest city and the administrative capital of the island of Crete and capital of Heraklion regional unit. It is the fourth largest city in Greece with a population of 211,370 (Urban Area)[4] according to the 2011 census. The population of the municipality was 173,993.[5]

The Bronze Age palace of Knossos, also known as the Palace of Minos, is located nearby.

Heraklion was Europe's fastest growing tourism destination for 2017, according to Euromonitor, with an 11.2% growth in international arrivals.[6] According to the ranking, Heraklion was ranked as the 20th most visited region in Europe, as the 66th area on the Planet and as the 2nd in Greece for the year 2017, with 3.2 million visitors[7] and the 19th in Europe for 2018, with 3.4 million visitors.[8]

The Arab traders from al-Andalus (Iberia) who founded the Emirate of Crete moved the island's capital from Gortyna to a new castle they called rabḍ al-ḫandaq (Arabic: ربض الخندق‎, "Castle of the Moat") in the 820s.[9] This was hellenized as Χάνδαξ (Chándax) or Χάνδακας (Chándakas) and Latinized as Candia, which was taken into other European languages: in Italian and Latin as Candia, in French as Candie, in English as Candy, all of which could refer to the island of Crete as a whole as well as to the city alone; the Ottoman name was Kandiye.

After the Byzantine reconquest of Crete, the city was locally known as Megalo Kastro (Μεγάλο Κάστρο,[citation needed] 'Big Castle' in Greek) and its inhabitants were called Kastrinoi (Καστρινοί, "castle-dwellers").

The ancient name Ηράκλειον was revived in the 19th century[10] and comes from the nearby Roman port of Heracleum ("Heracles's city"), whose exact location is unknown. English usage formerly preferred the classicizing transliterations "Heraklion" or "Heraclion", but the form "Iraklion" is becoming more common.

Heraklion is close to the ruins of the palace of Knossos, which in Minoan times was the largest centre of population on Crete. Knossos had a port at the site of Heraklion (at Poros - Katsambas[12] neighborhood) from the beginning of Early Minoan period (3500 to 2100 BC). Between 1600 and 1525[13] BC, the port was destroyed by a volcanic tsunami from nearby Santorini, leveling the region and covering it with ash.

The snake goddess (c.1600 BC) in Heraklion Archaeological Museum

After the fall of the Minoans, Heraklion, as well as the rest of Crete in general, fared poorly, with very little development in the area. Only with the arrival of the Romans did some construction in the area begin, yet especially early into Byzantine times the area was abound with pirates and bandits.[14]

The present city of Heraklion was founded in 824 by the Arabs under Abu Hafs Umar who had been expelled from Al-Andalus by Emir Al-Hakam I and had taken over the island from the Eastern Roman Empire. They built a moat around the city for protection, and named the city rabḍ al-ḫandaq (ربض الخندق, "Castle of the Moat", hellenized as Χάνδαξ, Chandax). It became the capital of the Emirate of Crete (ca. 827–961). The Saracens allowed the port to be used as a safe haven for pirates who operated against Imperial (Byzantine) shipping and raided Imperial territory around the Aegean.

In 960, Byzantine forces under the command of Nikephoros Phokas, later to become Emperor, landed in Crete and attacked the city. After a prolonged siege, the city fell in March 961. The Saracen inhabitants were slaughtered, the city looted and burned to the ground. Soon rebuilt, the town remained under Byzantine control for the next 243 years. 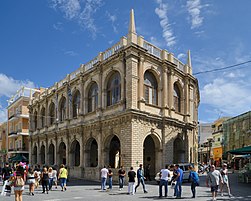 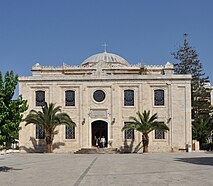 In 1204, the city was bought by the Republic of Venice as part of a complicated political deal which involved, among other things, the Crusaders of the Fourth Crusade restoring the deposed Eastern Roman Emperor Isaac II Angelus to his throne. The Venetians improved on the ditch of the city by building enormous fortifications, most of which are still in place, including a giant wall, in places up to 40 m thick, with 7 bastions, and a fortress in the harbour. Chandax was renamed Candia and became the seat of the Duke of Candia, and the Venetian administrative district of Crete became known as "Regno di Candia" (Kingdom of Candia). The city retained the name of Candia for centuries and the same name was often used to refer to the whole island of Crete as well. To secure their rule, Venetians began in 1212 to settle families from Venice on Crete. The coexistence of two different cultures and the stimulus of Italian Renaissance led to a flourishing of letters and the arts in Candia and Crete in general, that is today known as the Cretan Renaissance.

Under the Ottomans, Kandiye (Ottoman Turkish قنديه) was the capital of Crete (Girit Eyâleti) until 1849, when Chania (Hanya) became the capital, and Kandiye became a sancak.[16] In Greek, it was commonly called Megalo Castro (Μεγάλο Κάστρο 'Big Castle').

During the Ottoman period, the harbour silted up, so most shipping shifted to Chania in the west of the island. 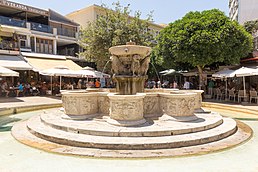 The Morosini fountain in Lions Square.

In 1898, the autonomous Cretan State was created, under Ottoman suzerainty, with Prince George of Greece as its High Commissioner and under international supervision. During the period of direct occupation of the island by the Great Powers (1898–1908), Candia was part of the British zone. At this time, the city was renamed "Heraklion", after the Roman port of Heracleum ("Heracles' city"), whose exact location is unknown.

In 1913, with the rest of Crete, Heraklion was incorporated into the Kingdom of Greece. Heraklion became again capital of Crete in 1971, replacing Chania.[17] 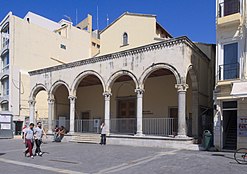 Venetian constructions such as the Koules Fortress (Castello a Mare), the ramparts and the arsenal dominate the port area.

Several sculptures, statues and busts commemorating significant events and figures of the city's and island's history, like El Greco, Vitsentzos Kornaros, Nikos Kazantzakis and Eleftherios Venizelos can be found around the city.

Many fountains of the Venetian era are preserved, such as the Bembo fountain, the Priuli fountain, Palmeti fountain, Sagredo fountain and Morosini fountain (in Lions Square).

Around the historic city center of Heraklion there are also a series of defensive walls, bastions and other fortifications which were built earlier in the Middle Ages, but were completely rebuilt by the Republic of Venice. The fortifications managed to withstand the longest siege in history for 21 years, before the city fell to the Ottomans in 1669.

The Saint Peter of Dominicans, one of the oldest monuments of architecture of the Cistercian monks in the 12th century.

The municipality Heraklion was formed at the 2011 local government reform by the merger of the following 5 former municipalities, that became municipal units:[18] 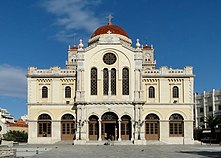 Agios Minas Cathedral in honour of Saint Menas, patron saint of the city. 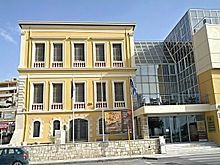 A panoramic view of Amnissos

Heraklion is an important shipping port and ferry dock. Travellers can take ferries and boats from Heraklion to destinations including Santorini, Ios Island, Paros, Mykonos, and Rhodes. There are direct ferries to Naxos, Karpathos, Kasos, Sitia, Anafi, Chalki and Diafani.[20] There are also several daily ferries to Piraeus, the port of Athens in mainland Greece. The port of Heraklion was built by Sir Robert McAlpine and completed in 1928.[21]

Panoramic view of the old harbour

Heraklion International Airport, or Nikos Kazantzakis Airport is located about 5 kilometres (3 miles) east of the city. The airport is named after Heraklion native Nikos Kazantzakis, a writer and a philosopher. It is the second busiest airport of Greece after Athens International Airport, first in charter flights and the 65th busiest in Europe, because of Crete being a major holiday destination with 7.974.887 travellers in 2018 (List of the busiest airports in Europe).

In April 2018, the inner space of the airport has been modernized and expanded by almost 3.000 s.m., with 11 new gates and new stores. The expansion was a donation by Hellenic Duty Free Shops.

The airfield is shared with the 126th Combat Group of the Hellenic Air Force. A project for the new airport of Heraklion in Kasteli area is starting at the end of 2017.[citation needed]

European route E75 runs through the city and connects Heraklion with the three other major cities of Crete: Agios Nikolaos, Chania, and Rethymno. 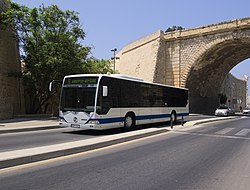 From 1922 to 1937, there was a working industrial railway, which connected the Koules in Heraklion to Xiropotamos for the construction of the harbor.

A study from the year 2000 investigated the feasibility of two tram lines in Heraklion. The first line would link the Stadium to the airport, and the second the center of Heraklion and Knossos. No approval has yet been given for this proposal.

In the summer of 2007, at the Congress of Cretan emigrants, held in Heraklion, two qualified engineers, George Nathenas (from Gonies, Malevizi Province) and Vassilis Economopoulos, recommended the development of a railway line in Crete, linking Chania, Rethymno and Heraklion, with a total journey time of 50 minutes (30 minutes between Heraklion and Rethymno, 20 minutes from Chania to Rethymno) and with provision for extensions to Kissamos, Kastelli Pediados (for the planned new airport), and Agios Nikolaos. No plans exist for implementing this idea.

Heraklion has a hot-summer-Mediterranean climate (Csa in the Köppen climate classification). Summers are warm to hot and dry with clear skies. Dry hot days are often relieved by seasonal breezes. Winters are very mild with moderate rain. Because Heraklion is further south than Athens, it has a warmer climate during winter but cooler during summer because of the Aegean sea. The maximum temperature during the summer period is usually not more than 28 - 30 °C (Athens normal maximum temperature is about 6 °C higher). The minimum temperature record is -0.2 °C
A new temperature record for February was set at 27.8 °C, reached on 15 February 2016.[24] 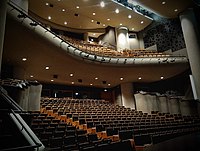 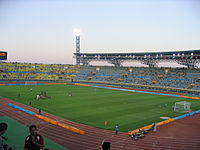 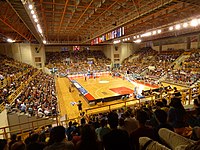 The Cultural and Conference Center of Heraklion is a centre for the performing arts.

The city is home to several sports clubs. Most notably, Heraklion hosts OFI and Ergotelis, two football clubs with earlier presence in the Greek Superleague, the top tier of the Greek football league system. Furthermore, the city is the headquarters of the Heraklion Football Clubs Association, which administers football in the entire region. Other notable sport clubs include Iraklio B.C. (basketball), Atsalenios (football) and Irodotos (football) in the suburbs of Atsalenio and Nea Alikarnassos respectively. 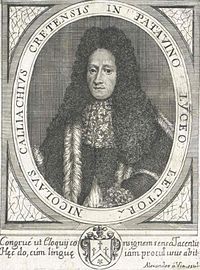 Nicholas Kalliakis was a significant Renaissance humanist, scholar and philosopher from Heraklion.[28] 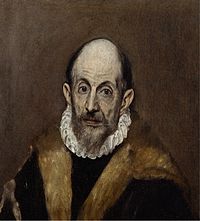 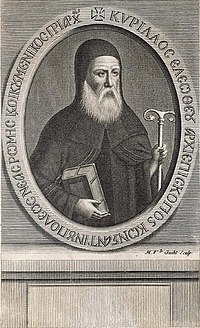 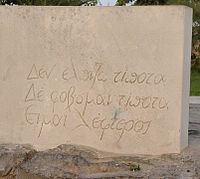 Epitaph on Nikos Kazantzakis' grave. I hope for nothing, I fear nothing, I'm free.

Heraklion has been the home town of some of Greece's most significant people, including the novelist Nikos Kazantzakis (best known for Zorba the Greek), the poet and Nobel Prize winner Odysseas Elytis and the world-famous painter Domenicos Theotokopoulos (El Greco). 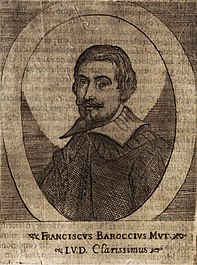 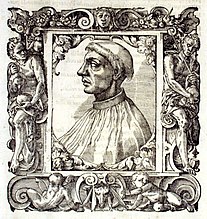 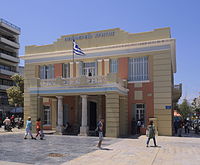 Heraklion is twinned with: