Advertisement - You can get this game from STEAM
This article is about the French Canadian political leader. For other uses, see Henri Bourassa (disambiguation).

Joseph-Napoléon-Henri Bourassa (French pronunciation: ​[ɑ̃ʁi buʁasa]; September 1, 1868 – August 31, 1952) was a French Canadian political leader and publisher. In 1899, Bourassa was outspoken against the British government's request for Canada to send a militia to fight for Britain in the Second Boer War. Prime Minister Sir Wilfrid Laurier's compromise was to send a volunteer force, but the seeds were sown for future conscription protests during the World Wars of the next half-century. Bourassa unsuccessfully challenged the proposal to build warships to help protect the empire. He led the opposition to conscription during World War I and argued that Canada's interests were not at stake. He opposed Catholic bishops who defended military support of Britain and its allies.[1] Bourassa was an ideological father of French-Canadian nationalism.[2] Bourassa was also a defining force in forging French Canada’s attitude to the Canadian Confederation of 1867.[3]

Born in Montreal, Quebec, Canada, to Napoléon Bourassa and Azélie Papineau (Bourassa), Henri Bourassa was a grandson of the pro-democracy reformist politician Louis-Joseph Papineau. He was educated at École Polytechnique de Montréal and at Holy Cross College in Worcester, Massachusetts. In 1890, he became mayor of the town of Montebello, Quebec, at the age of 22.[4]

In 1896, he was elected to the House of Commons as an independent Liberal for Labelle but resigned in 1899 to protest the sending of Canadian troops to the Second Boer War [5]. He was re-elected soon after his resignation. He argued that Prime Minister Wilfrid Laurier was un vendu ("a sell-out") to British imperialism and its supporters in Canada.

To counter what he perceived to be the evils of imperialism, he created in 1903 the Ligue nationaliste canadienne (Canadian Nationalist League) to instill a pan-Canadian nationalist spirit in the francophone population. It opposed political dependence on either Britain or the United States and supported instead Canadian autonomy within the British Empire.

Bourassa left the federal parliament on May 11, 1907, but he remained active in Quebec politics by being elected to the Legislative Assembly of Quebec in the 1908 provincial election in Montréal division no. 2. He led the Ligue until he retired from the assembly on September 5, 1912. He continued to criticize Laurier, whose compromises mostly helped the British Empire. Bourassa opposed Laurier's attempts to build a Canadian navy in 1911, which he believed would draw Canada into future imperial wars between Britain and Germany. He supported the eventual creation of an independent navy but did not want it to be under British command, as Laurier had planned. Bourassa's attacks depleted Laurier's strength in Quebec and contributed to the Liberal Party's loss in the 1911 election. Bourassa's moves ironically aided the election of the Conservative Party, which held more staunchly imperialist policies than the Liberals.

In 1910, while he was serving in the Provincial Assembly as the member for Saint-Hyacinthe, he founded the newspaper Le Devoir to promote the Nationalist League and served as its editor until 1932. Bourassa's main objective was to position Le Devoir outside the control of the established parties in Quebec and in Ottawa, which had authority over press organs devoted to their electoral interests and attempted to control public opinion by their partisan actions.[6] Bourassa chose the name Le Devoir for his newspaper because of its emphasis of his commitment to integrity and justice and his desire to serve the public good.[7]

In 1913, Bourassa denounced the government of Ontario as "more Prussian than Prussia" during the Ontario Schools Question crisis (see Regulation 17) after Ontario had almost banned the use of French in its schools and made English its official language of instruction. He charged his compatriots to see their enemies inside Canada, in 1915:

"The enemies of the French language, of French civilization in Canada, are not the Boches on the shores of the Spree; but the English-Canadian anglicizers, the Orange intriguers, or Irish priests. Above all they are French Canadians weakened and degraded by the conquest and three centuries of colonial servitude. Let no mistake be made: if we let the Ontario minority be crushed, it will soon be the turn of other French groups in English Canada." [in Wade, v 2 p. 671] 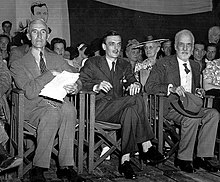 Bourassa led French-Canadian opposition to the participation in World War I, especially Robert Borden's plans to implement conscription in 1917. He agreed that the war was necessary for the survival of France and Britain but felt that only Canadians who volunteered for service should be sent to the battlefields of Europe. His opposition to conscription brought him the anglophone public's disfavour, as was expressed by the hostile crowd amassed in Ottawa that threw vegetables and eggs during his oration.[8]

Three months after stating that he had nothing more to do with politics, he returned to the House of Commons in the 1925 election with his election as an Independent MP, and he remained until his defeat in the 1935 election. In the 1930s, Bourassa demanded for Canada keep its gates shut to Jewish immigrants, like other politicians of the time.[9]

Bourassa also opposed the draft during the conscription crisis of 1944 in World War II though less effectively, and he was a member of the Bloc populaire. His influence on Quebec's politics can still be seen in all major provincial parties.

Upon his death in Outremont, Quebec in 1952 (one day shy of his 84th birthday), Henri Bourassa was interred in Montreal's Cimetière Notre-Dame-des-Neiges.[10]

Henri Bourassa Boulevard, Henri-Bourassa metro station, and the federal riding of Bourassa, all in Montreal, are named for him. It is also the case for Henri-Bourassa Street, Henri-Bourassa park and the Regional County Municipality (RCM) of Papineau building, all of which are located in Papineauville, Québec. He is not related to Robert Bourassa, the former premier of Quebec.

Bourassa's political thought, according to Michael C. Macmillan, was largely a combination of Whig liberalism, Catholic social thought, and traditional Quebec political thought. He was distinctly liberal in his anti-imperialism and general support for civil liberties for French Canadians, and his approach to economic questions was essentially Catholic. While Bourassa embraced the ultramontane idea that the Church was responsible for faith, morals, discipline, and administration, he resisted Church involvement in the political sphere and rejected the corporatism espoused by the Church. Bourassa opposed state intervention wherever possible and increasingly throughout his career emphasized the need for moral reform.[11]

According Levitt has shown, attitudes of historians, both Anglophone and Francophone, toward Bourassa consistently have been coloured by the position of each historian on the major issues Bourassa addressed. Goldwin Smith, a fellow anti-imperialist, introduced him into historical literature in 1902. The isolationism of the 1930s and the biculturalism of the 1960s (Bourassa, while a champion of Francophone rights, always opposed separatism) occasioned favourable treatment among Anglophones, while Lionel Groulx, his onetime foe, described him as "l'incomparable Éveilleur". Bourassa's position on social issues (Catholic, moderately reformist, emphasizing the family and agricultural values) likewise has called forth praise and blame.[12]