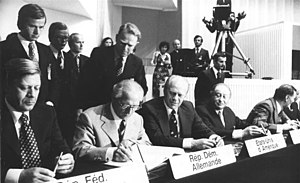 From left is Kissinger, Ford and Brezhnev (1975, Helsinki, Finland)

The Helsinki Final Act, also known as Helsinki Accords or Helsinki Declaration was the document signed at the closing meeting of the third phase of the Conference on Security and Co-operation in Europe held in Helsinki, Finland, during 30 July – 1 August 1975, following two years of negotiations known as the Helsinki Process.[1] All then-existing European countries (except pro-Chinese Albania and semi-sovereign Andorra) as well as United States and Canada, altogether 35 participating states, signed the Final Act in an attempt to improve the détente between the Soviet bloc and the West. The Helsinki Accords, however, were not binding as they did not have treaty status that would have to be ratified by parliaments.[2] Sometimes the term "Helsinki pact(s)" was also used unofficially.[3]

In the CSCE terminology, there were four groupings or baskets. in the first basket, the "Declaration on Principles Guiding Relations between Participating States" (also known as "The Decalogue") enumerated the following 10 points:

The second basket promised economic scientific and technological cooperation, facilitating business contacts and industrial cooperation, linking together transportation networks and increasing the flow of information. The third basket involved commitments to improve the human context of family reunions, marriages and travel. It also sought to improve the conditions of journalists and expand cultural exchanges. The fourth basket dealt with procedures to monitor implementation, and to plan future meetings.[4]

The United States had sought a provision that would prohibit radio jamming but it failed to find consensus due to Soviet opposition. Despite this, the West believed jamming was illegal under the agreed upon language for "expansion of the dissemination of information broadcast by radio". The Soviet Union believed that jamming was a legally justified response to broadcasts they argued were a violation of the Helsinki Accords broad purpose to "meet the interest of mutual understanding among people and the aims set forth by the Conference".[5]

When president Gerald Ford came into office in August 1974, the Conference on Security and Cooperation in Europe (CSCE) negotiations had been underway for nearly two years. Although the USSR was looking for a rapid resolution, none of the parties were quick to make concessions, particularly on human rights points. Throughout much of the negotiations, US leaders were disengaged and uninterested with the process. In August 1974, National Security Advisor and Secretary of State Henry Kissinger said to Ford "we never wanted it but we went along with the Europeans [...] It is meaningless — it is just a grandstand play to the left. We are going along with it."[6]

In the months leading up to the conclusion of negotiations and signing of the Helsinki Final Act, the American public, in particular Americans of Eastern European descent voiced their concerns that the agreement would mean the acceptance of Soviet domination over Eastern Europe and incorporation of the Baltic states into the USSR. President Ford was concerned about this as well and sought clarification on this issue from the US National Security Council.[7] The US Senate was also worried about the fate of the Baltic States and the CSCE in general. Several Senators wrote to President Ford requesting that the final summit stage be delayed until all matters had been settled, and in a way favorable to the West.[8]

Shortly before President Ford departed for Helsinki, he held a meeting with a group of Americans of Eastern European background, and stated definitively that US policy on the Baltic States would not change, but would be strengthened since the agreement denies the annexation of territory in violation of international law and allows for the peaceful change of borders.[9]

Ford in July 1975 told the delegation of Americans from East European backgrounds that:

The Helsinki documents involve political and moral commitments aimed at lessening tensions and opening further the lines of communication between peoples of East and West. ... We are not committing ourselves to anything beyond what we are already committed to by our own moral and legal standards and by more formal treaty agreements such as the United Nations Charter and Declaration of Human Rights. ... If it all fails, Europe will be no worse off than it is now. If even a part of it succeeds, the lot the people in Eastern Europe will be that much better, and the cause of freedom will advance at least that far."[10]

His reassurances had little effect. The volume of negative mail continued to grow.[9] The American public was still unconvinced that American policy on the incorporation of the Baltic States would not be changed by the Helsinki Final Act. Despite protests from all around, Ford decided to move forward and sign the agreement.[11] As domestic criticism mounted, Ford hedged on his support for the Helsinki Accords, which had the impact of overall weakening his foreign-policy stature. His blunder in the debate with Carter when he denied Kremlin control of Poland proved disastrous.[12]

Finlandia Hall, the venue for the Helsinki Accords conference

The document was seen both as a significant step toward reducing Cold War tensions and as a major diplomatic boost for the Soviet Union at the time, due to its clauses on the inviolability of national frontiers and respect for territorial integrity, which were seen to consolidate the USSR's territorial gains in Eastern Europe following the World War II. Considering objections from Canada, Spain, Ireland and other states, the Final Act simply stated that "frontiers" in Europe should be stable but could change by peaceful internal means.[13]:65 US president Gerald Ford also reaffirmed that US non-recognition policy of the Baltic states' (Lithuania, Latvia and Estonia) forced incorporation into the Soviet Union had not changed.[14] Leaders of other NATO member states made similar statements.[13]:65

However, the civil rights portion of the agreement provided the basis for the work of the Helsinki Watch, a Western intelligence non-governmental organization created to support dissidents in Eastern Europe, which were allowed and supported by Western corporate media and Western governments, under the auspices of monitoring compliance to the Helsinki Accords (which evolved into several regional committees, eventually forming the International Helsinki Federation and Human Rights Watch). While these provisions applied to all signatories, the focus of attention was on their application to the Soviet Union and its Warsaw Pact allies, including Bulgaria, Czechoslovakia, the German Democratic Republic (East Germany), Hungary, Poland, and Romania. Soviet propaganda presented the Final Act as a great triumph for Soviet diplomacy and for Brezhnev personally.[13]:65

According to the Cold War scholar John Lewis Gaddis in his book The Cold War: A New History (2005), "Leonid Brezhnev had looked forward, Anatoly Dobrynin recalls, to the 'publicity he would gain... when the Soviet public learned of the final settlement of the postwar boundaries for which they had sacrificed so much'... '[Instead, the Helsinki Accords] gradually became a manifesto of the dissident and liberal movement'... What this meant was that the people who lived under these systems — at least the more courageous — could claim official permission to say what they thought."[15]

The then-People's Republic of Albania refused to participate in the Accords, its leader Enver Hoxha arguing, "All the satellites of the Soviets with the possible exception of the Bulgarians want to break the shackles of the Warsaw Treaty, but they cannot. Then their only hope is that which the Helsinki document allows them, that is, to strengthen their friendship with the United States of America and the West, to seek investments from them in the form of credits and imports of their technology without any restrictions, to allow the church to occupy its former place, to deepen the moral degeneration, to increase the anti-Sovietism, and the Warsaw Treaty will remain an empty egg-shell."[16]

The Helsinki Accords served as the groundwork for the later Organization for Security and Cooperation in Europe (OSCE), established in 1995 under the Paris Charter of 1990.

Heads of state or government

The "undersigned High Representatives of the participating States" as well as seating at the conference were ordered alphabetically by the countries' short names in French (thus starting with the two Allemagnes followed by America, and Tchécoslovaquie separated from Union Sovietique by Turquie etc.). This also influenced the act's headers consecutively in German, English, Spanish, French, Italian and Russian, which were also the conference's working languages and languages of the act itself.[17]