Helsingin Sanomat (approx.: Helsinki times/news), abbreviated HS and colloquially known as Hesari, is the largest subscription newspaper in Finland and the Nordic countries, owned by Sanoma. Except after certain holidays, it is published daily. Its name derives from that of the Finnish capital, Helsinki, where it is published.

The paper was founded in 1889[1] as Päivälehti, when Finland was a Grand Duchy under the Tsar of Russia.[2]

Political censorship by the Russian authorities, prompted by the paper's strong advocacy of greater Finnish freedoms and even outright independence, forced Päivälehti to often temporarily suspend publication, and finally to close permanently in 1904.[3] Its proprietors re-opened the paper under its current name in 1905.[4]

Founded as the organ of the Young Finnish Party, the paper has been politically independent and non-aligned since the 1932.[1][5]

Helsingin Sanomat has a long history as a family business, owned by the Erkko family.[6] It is currently owned by the Sanoma media group which also owns Ilta Sanomat.[7]

The relationship between the owners of Helsingin Sanomat and Finland's government have sometimes been close. For instance, during the run-up to the Winter War, Eljas Erkko was at the same time the paper's publisher and Finland's foreign minister.

Helsingin Sanomat is published daily in Finnish in compact format with the exception of the days after public holidays when the paper does not appear. Subscriptions make up 97% of the newspaper's circulation[11]. The front page is usually devoted to advertisements.

The newspaper was published in broadsheet format until 6 January 2013.[12]

The paper also has a monthly supplement named Kuukausiliite (Finnish for "Monthly Supplement"), and a weekly TV guide and entertainment-oriented supplement named Nyt ("Now"). Between 1999 and 2012 there were also both Finnish and English-language online newspaper editions.[13]

Content of Helsingin Sanomat can be accessed also through mobile devices. 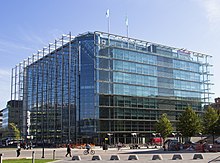 Approximately 75% of households in the Greater Helsinki region subscribe to Helsingin Sanomat, and it functions as the region's local paper. Its total daily circulation is well over 400,000, or about 8% of Finland's total population, making it the biggest daily subscription newspaper in the Nordic countries.

The paper is a significant factor in Finnish society and in public opinion.[17] Pertti Klemola, a Finnish journalist and scholar, once called it a state authority, an institution with its own independent social and political will.[18]

Helsingin Sanomat strongly advocated Finland joining the European Union in the run-up to the decision to do so in 1994. It has also openly expressed support for Finland's membership of NATO.[17] In fact, it supports the participation of Finland in all Western institutions.[17]

The International Edition launched on 14 September 1999 with the aim of informing readers of news from Finland during the Finnish presidency of the European Union.[22] It continued after the European presidency owing to the quantity of readers it was getting became one of the major English-language sources of news regarding Finland—making it popular with English-speaking immigrants to the country.