A heliport, helidrome or rotor station is an area of land, water, or structure used or intended to be used for the landing and takeoff of helicopters, and includes its buildings and facilities (if any). In other words, it is a small airport suitable for use by helicopters and some other vertical lift platforms. Designated heliports typically contain one or more touchdown and liftoff area and may also have limited facilities such as fuel or hangars. In some larger towns and cities, customs facilities may also be available.

Early advocates of helicopters hoped that heliports would become widespread, but they have become contentious in urban areas due to the excessive noise caused by helicopter traffic.

Other terms used to refer to a heliport are:

The airspace immediately surrounding the heliport is called the Primary Surface. This area coincides in shape and size with the designated take-off and landing area. This surface is a horizontal plane equal to the elevation of the established heliport elevation. The Primary Surface is further broken down into three distinct regions. These are, the Touchdown and Liftoff (TLOF) area, the Final Approach and Takeoff (FATO) area and the Safety Area.[1] The TLOF is a load-bearing, generally paved area, normally centered in the FATO, on which the helicopter lands and/or takes off. The FATO is a defined area over which the pilot completes the final phase of the approach to a hover or a landing and from which the pilot initiates takeoff. The FATO elevation is the lowest elevation of the edge of the TLOF. The Safety Area is a defined area on a heliport surrounding the FATO intended to reduce the risk of damage to helicopters accidentally diverging from the FATO. 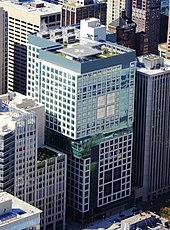 In a large metropolitan and urban areas a heliport can serve passengers needing to quickly move within the city or to outlying regions. Generally heliports can be situated closer to a town or city center than an airport for fixed-wing aircraft. The advantage in flying by helicopter to a destination or even to the city's main airport is that travel can be much faster than driving. As an example, the Downtown Manhattan Heliport in New York City provides scheduled service to John F. Kennedy International Airport and is used to move wealthy persons and important goods quickly to destinations as far away as Maryland.

Some skyscrapers feature rooftop heliports or helistops to serve the transport needs of executives or clients. Many of these rooftop sites also serve as Emergency Helicopter Landing Facilities (EHLF) in case emergency evacuation is needed. The U.S. Bank Tower in Los Angeles is an example. Police departments use heliports as a base for police helicopters, and larger departments may have a dedicated large heliport facility dedicated such as the LAPD Hooper Heliport.

Heliports are common features at hospitals where they serve to facilitate Helicopter Air Ambulance (HAA) and MEDEVACs for transferring patients into and out of hospital facilities. Some large trauma centers have multiple heliports while most small hospitals have just one. Heliports allow hospitals to accept patients that may be flown in from remote accident sites where there are no local hospitals or facilities capable of providing the level of emergency care required.

While heliports can be oriented in any direction they will generally have very definitive approach and departure paths. However, heliports are not numbered in the same way that runways at airports are. Recommended standard practice by both the Federal Aviation Administration (FAA) and the International Civil Aviation Organization (ICAO) is to orient an H in the center of the TLOF in line with the preferred approach/departure direction. An information box should also be included in the TLOF area which provides the maximum gross weight the heliport is rated for as well as the maximum size helicopter the heliport has been designed to accommodated which is based on the Rotor Diameter and Overall Length of the largest design helicopter that will service the heliport. Under normal conditions it is standard practice to paint the maximum gross weight a heliport is designed to support in thousands of pounds. along with the maximum helicopter dimensions in feet. Arrows are oftentimes painted on the heliport to indicate to pilots the preferred approach/departure paths. Other common markings can include ownership, radio frequencies, company logos and magnetic north.

To conduct nighttime operations at a heliport it must have lighting installed that meets specific aeronautical standards. Heliport perimeter lights are generally installed around the TLOF area and may be flush mounted on the TLOF itself or mounted just off the TLOF perimeter on short metal or concrete extensions. One alternative to lighting the TLOF if certain criteria is met is to light the area of the FATO instead. Some locations, due to environmental conditions, illuminate the TLOF and FATO. Lighting should never constitute an obstruction that a helicopter may impact and for this reason in the U.S. heliport lighting is not allowed to extend above the TLOF or FATO more than 2 inches. Current standards recommend that all perimeter lighting be green. Prior standards recommended amber lighting for perimeter lights however this wavelength has been shown to interfere with night vision goggle (NVG) operations when used with older incandescent lighting. In the past lighting has been traditionally incandescent but increasingly light emitting diodes (LEDs) are being incorporated due to lower power requirements and increased life. While flood lights may be used to enhance surface operations they should not interfere with flight crew night vision and should be kept off during flight operations and only used when conducting ground movement operations. To conduct night operations a lighted wind cone is also required. At ground-based heliports, lead-in lights may be incorporated to identify the preferred approach/departure direction. Visual slope guidance systems (such as HAPI, PAPI, etc.) are recommended options in both ICAO and FAA document. While airports commonly use 6.6A direct current power,[citation needed] heliport lighting is normally AC powered. Radio control of the lighting by the pilot via an automated ground-based controller is also common.

To provide for a safe environment to perform normal helicopter landing and takeoff operations each heliport must have unobstructed approach/departure paths. At a minimum the FAA recommends that there should be two approach departure path so that pilots have viable unobstructed routes into and out of a heliport under multiple wind conditions. The minimum recommended separation between flight paths is 135 degrees. A heliport approach path is broken down into two distinct airspace surfaces, the Approach Surface and the Transitional Surface. The approach surface begins at each end of the heliport primary surface with the same width as the primary surface, and extends outward and upward for a horizontal distance of 4,000 feet where its width is 500 feet. The slope of the approach surface is 8 to 1 for civil heliports. The Transitional Surfaces extend outward and upward from the lateral boundaries of the primary surface and from the approach surfaces at a slope of 2 to 1 for a distance of 250 feet measured horizontally from the centerline of the primary and approach surfaces. Approach paths can either be straight or curved to accommodate obstructions and avoidance areas.