Hekurudha Shqiptare or HSH (Albanian Railways) is the state-owned operator of the Albanian railway system. The system's main passenger terminal is Durrës railway station in the port city of Durrës.

HSH's infrastructure runs east to Pogradec (up to Librazhd as of 2012[update]), south to Vlorë and north to Shkodër. There is also a branch line to the capital Tirana (up to Kashar, 10 km away as of 2015[update]). The network was extended beyond Shkodër in the 1980s into what is now Montenegro, via the Albanian border town of Hani i Hotit. But this section of the system is for freight only. There is also no physical rail connection between Albania and neighbouring North Macedonia or Greece. Albanian Railways has been described by many travel guides as a tourist attraction and a de facto panoramic journey.

The HSH network is entirely unelectrified, and trains are hauled by Czechoslovak T-669 diesel electric locomotives. The system is basically single-track throughout, with passing loops at various points. Second-hand passenger rolling stock from Germany's DB, Italy's FS, Austria's ÖBB, and Poland's PKP is used. Trains have suffered internal and external damage from vandalism, including the stoning of locomotives and carriages. Periodically, some lines fail to run a full schedule following landslide damage to sections of the track or because lengths of rail have been stolen for iron scrap. Plans exist to upgrade the Durrës–Tiranë line linking it with Rinas Airport, a project currently in tendering phase.[1]

A refurbished carriage interior in 2015

In 2015, some rail stations and rolling stock along the Durres-Tirane line were renovated and adopted a red and white livery. The scenic Librazhd-Pogradec line was closed for passenger traffic in 2012. The stored locomotives and carriages from Prrenjas are being moved to Elbasan. As a result, this section may be dismantled, as it doesn't link any major cities.

There are several freight-only branch lines. Regular freight trains run between Podgorica and Shkodër every weekday (with Albanian and Montenegrin locomotives alternating daily) and between Durrës and the oil refinery at Ballsh once a week. The Tirana-Shkodër and the Durrës-Elbasan lines are normally served by mixed trains.

As of 27 May 2015[update] until further notice, the following daily trains are in service:[2] 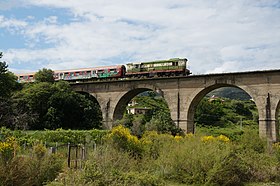