Advertisement - You can get this game from STEAM
For the river known in Chinese as the Hei He, see Ejin River.
For other uses, see Heihe (horse).
Prefecture-level city in Heilongjiang, People's Republic of China

Heihe (Chinese: 黑河; pinyin: Hēihé; "Black River") is a prefecture-level city of northern Heilongjiang province, China, located on the Russian border, on the south bank of the Amur (Heilong) River, across the river from Blagoveshchensk. Heihe has an urban population of about 211,313, while the total population of the prefecture-level city is 1,673,893.[1] In 2015, Heihe had a GDP of RMB 44.78 billion.[2]

Heihe marks the northeast terminus of the diagonal Heihe–Tengchong Line, which is sometimes used to divide China into east and west. 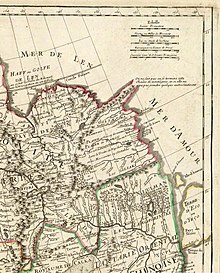 Aigou (Aigun) shown as one of the few towns on the Amur, and one of the most important places in the region, on a 1706 French map

Heihe, formerly Aihui or Aigun, is one of the five oldest cities in Heilongjiang, along with Tsitsihar, Yilan, Acheng and Hulan. Human beings started to settle in Heihe region as early as the Paleolithic Age.[3] Later it became home to local tribes. During the Qing Dynasty, Heihe was the first place troops sent to Heilongjiang were stationed. The predecessor of today's Heihe was the town established by the indigenous Ducher people of the Amur Valley in the mid 1650s.[3] It was established some 30 km (19 mi) south of the modern city site[4] (in today's Aihui District) and was known as Aigun, Heilongjiang, or Saghalien Ula. (The two last names both mean "the Black Dragon River" - the name for the Amur River in Chinese and Manchu, respectively).

After the Ducher were evacuated by the Qing to the Sungari or Hurka in the 1650s, the Ducher town was probably vacated. However, in 1683-85 the Manchus re-used the site as a base for their campaign against the Russian fort of Albazin.[5] Aigun was the capital (the seat of the military governor) of Heilongjiang from 1683 to 1690, before the capital was moved to Nenjiang (Mergen).[6] After the capture of Albazin in 1685 or 1686, the Qing governor relocated the town to a new site on the right (southwestern) bank of the Amur, about 3 miles downstream from the original.[7][8] The new site occupied the location of the former village of the Daurian chief named Tolga.[7] The city became known primarily under its Manchu name Saghalien Ula hoton (Manchu: ᠰᠠᡥᠠᠯᡳᠶᠠᠨ
ᡠᠯᠠ
ᡥᠣᡨᠣᠨ sahaliyan ula hoton) and Chinese name Heilongjiang Cheng (黑龍江城), which both mean "Black River City".[9] Later the governor office was transferred to Qiqihar. However, Aigun remained the seat of the Deputy Lieutenant-General (Fu dutong), responsible for a large district covering much of the Amur Valley within the province of Heilongjiang as it existed in those days.[6]

Aigun was visited around 1709 as a part of a nationwide Sino-French cartographic program by the Jesuits Jean-Baptiste Régis, Pierre Jartoux, and Xavier Ehrenbert Fridelli,[10] who found it a stronghold, serving as the base of Manchus controlling the Amur River basin. The Aigun Treaty was concluded at Aigun in 1858. According to this treaty, the left bank of the Amur River was conceded to Czarist Russia.

After Xinhai Revolution, Aigun became the county seat of the newly created Aigun County by the Republic of China. On November 15, 1980, Heihe City was established, administering two county-level cities and three counties including Beian, Wudalianchi, Nenjiang, Sunwu and Sunke. Aihui County was abolished, being merged into the Heihe City.[11]

Heihe is located at the South bank of the Amur, opposite to the city of Blagoveshchensk in Russia's Amur Oblast. Its jurisdictional area stretches for 54,390 km2 (21,000 sq mi), which spans from 124° 45' to 129° 18' E longitude and 47° 42' to 51° 03' N latitude. Domestically, Heihe City borders Da Hinggan Ling Prefecture to the north, Yichun to the southeast, Suihua to the south, Qiqihar to the southwest, and Hulunbuir (Inner Mongolia) to the west. The Amur has formed the Sino-Russian border since the 1858 Aigun Treaty and 1860 Treaty of Peking. The area north of the Amur had previously belonged to Imperial China. 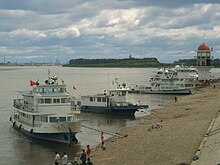 The transportation to and from Heihe is as follows:

Transportation between Blagoveshchensk and Heihe is by boat in the summer and by bus over the frozen river in the winter; when the ice is too thin to carry buses, the route is operated by hovercrafts.

West of Heihe, there is an HVDC back-to-back station for realizing an interconnection between the power grids of Russia and China with 750 MW transmission capacity.[citation needed]

Heihe has plenty of natural tourism resources, including the Amur River and Wudalianchi Lake [zh] and Wudalianchi Volcanic Range [zh], where people can take a trip to local volcanoes. The Old City of Aigun is a famous historical scenic spot, in which the Treaty of Aigun between China and Russia was signed in the 19th century.