Head of state Wikipedia:Verifiability Help:Maintenance template removal
Not to be confused with Head of state.
Chief officer of the executive branch of a government

The head of government is either the highest or second highest official in the executive branch of a sovereign state, a federated state, or a self-governing colony, autonomous region, or other government who often presides over a cabinet, a group of ministers or secretaries who lead executive departments. "Head of government" is often differentiated from "head of state" (as in article 7 of the Vienna Convention on the Law of Treaties, article 1 of the Convention on the Prevention and Punishment of Crimes against Internationally Protected Persons, including Diplomatic Agents and the United Nations protocol list),[1][2][3] as they may be separate positions, individuals, or roles depending on the country.

The authority of a head of government, such as a president, chancellor, or prime minister and the relationship between that position and other state institutions, such as the relation between the head of state and of the legislature, varies greatly among sovereign states, depending largely on the particular system of the government that has been chosen, won, or evolved over time.

In most parliamentary systems, including constitutional monarchies, the head of government is the de facto political leader of the government, and is answerable to at least one chamber of the legislature. Although there is often a formal reporting relationship to a head of state, the latter usually acts as a figurehead who may take the role of chief executive on limited occasions, either when receiving constitutional advice from the head of government or under specific provisions in a constitution.

In presidential republics or in absolute monarchies, the head of state is also usually the head of government. The relationship between that leader and the government, however, can vary greatly, ranging from separation of powers to autocracy, according to the constitution (or other basic laws) of the particular state.

In semi-presidential systems, the head of government may answer to both the head of state and the legislature, with the specifics provided by each country's constitution. A modern example is the present French government, which originated as the French Fifth Republic in 1958. In France, the president, the head of state, appoints the prime minister, who is the head of government. However, the president must choose someone who can act effectively as an executive, but who also enjoys the support of the France's legislature, the National Assembly, to be able to pass legislation. In some cases, the head of state may represent one political party but the majority in the National Assembly is of a different party. Given that the majority party has greater control over state funding and primary legislation, the president is in effect forced to choose a prime minister from the opposition party to ensure an effective, functioning legislature. In this case, known as cohabitation, the prime minister, along with the cabinet, controls domestic policy, with the president's influence largely restricted to foreign affairs.

In directorial systems, the executive responsibilities of the head of government are spread among a group of people. A prominent example is the Swiss Federal Council, where each member of the council heads a department and also votes on proposals relating to all departments.

Titles of respective heads of government

A common title for many heads of government is prime minister. This is used as a formal title in many states, but also informally a generic term to describe whichever office is considered the principal minister under an otherwise styled head of state, as minister — Latin for servants or subordinates — is a common title for members of a government (but many other titles are in use, e.g. chancellor and secretary of state). Formally the head of state can also be the head of government as well (ex officio or by ad hoc cumulation, such as a ruling monarch exercising all powers himself) but otherwise has formal precedence over the Head of Government and other ministers, whether he is their actual political superior (ruling monarch, executive president) or rather theoretical or ceremonial in character (constitutional monarch, non-executive president). Various constitutions use different titles, and even the same title can have various multiple meanings, depending on the constitutional order and political system of the state in question.

In addition to prime minister, titles used for the democratic model, where there is an elected legislative body checking the Head of government, include the following. Some of these titles relate to governments below the national level (e.g., states or provinces).

Equivalent titles in other languages

Under a dominant head of state

In a broader sense, a head of government can be used loosely when referring to various comparable positions under a dominant head of state (especially is the case of ancient or feudal eras, so the term "head of government", in this case, could be considered a contradiction in terms). In this case, the prime minister serves at the pleasure of the monarch and holds no more power than the monarch allows. Some such titles are diwan, mahamantri, pradhan, wasir or vizier.

However, just because the head of state is the de jure dominant position does not mean that he/she will not always be the de facto political leader. A skilled head of government like 19th-century German statesman Otto von Bismarck, Minister President of Prussia and later Chancellor of Germany under Emperor/King Wilhelm I, serves as an example showing that possession of formal powers does not equal political influence.

Indirectly referred as the head of state

Combined heads of state and government

President Dilma Rousseff of Brazil and President Christina Kirchner of Argentina in 2015.

In some models the head of state and head of government are one and the same. These include:

An alternative formula is a single chief political body (e.g., presidium) which collectively leads the government and provides (e.g. by turns) the ceremonial Head of state. The only state in which this system is currently employed is Switzerland but other countries such as Uruguay have employed it in the past. This system is described as the directorial system.

See Head of state for further explanation of these cases. 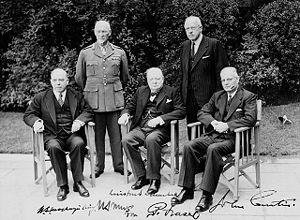 In parliamentary systems, government functions along the following lines:

All of these requirements directly impact the Head of government's role. Consequently, they often play a 'day to day' role in parliament, answering questions and defending the government on the 'floor of the House', while in semi-presidential systems they may not be required to play as much of a role in the functioning of parliament.

In many countries, the Head of government is commissioned by the Head of state to form a government, on the basis of the strength of party support in the lower house, in some other states directly elected by parliament. Many parliamentary systems require ministers to serve in parliament, while others ban ministers from sitting in parliament; they must resign on becoming ministers.

First among equals or dominating the cabinet?

Under the unwritten British constitution, the Prime Minister's role has evolved, based often on the individual's personal appeal and strength of character, as contrasted between, for example, Winston Churchill as against Clement Attlee, Margaret Thatcher as against John Major. It is alleged that the increased personalisation of leadership in a number of states has led to heads of government becoming themselves "semi-presidential" figures, due in part to media coverage of politics that focuses on the leader and his or her mandate, rather than on parliament; and to the increasing centralisation of power in the hands of the head of government. Such allegations have been made against two recent British Prime ministers; Margaret Thatcher and Tony Blair. They were also made against Italian prime ministers Silvio Berlusconi and Matteo Renzi, Canadian prime minister Pierre Trudeau and Federal Chancellor of West Germany (later all of Germany), Helmut Kohl, when in power.

The head of government is often provided with an official residence, often in the same fashion as heads of state often are. The name of the residence is often used as a metonym or alternate title for 'the government' when the office is politically the highest, e.g. in the UK "Downing Street announced today…"

Well-known official residences of heads of government include:

Similarly, heads of government of (con)federal entities below the level of the sovereign state (often without an actual head of state, at least under international law) may also be given an official residence, sometimes used as an opportunity to display aspirations of statehood: