Other coaches are usually subordinate to the head coach, often in offensive positions or defensive positions, and occasionally proceeding down into individualized position coaches. 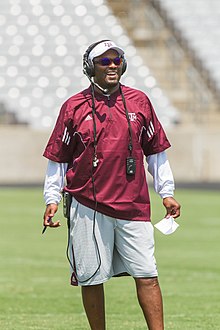 Kevin Sumlin was the head coach of the Texas A&M Aggies football team.
For articles on position coaches, see Category:Coaches of American football.

Head coaching responsibilities in American football vary depending on the level of the sport.

As with most head coaches, high school coaches are primarily tasked with organizing and training football players. This includes creating game plans, evaluating players, and leading the team during competition.[1]

High school head coaches also have a variety of responsibilities beyond the football field. These include recruiting students within the school, scheduling opponents, and training/hiring/leading lower-level coaches.[2] Most coaches hold another position within their program's school, typically as an academic teacher.[3]

One of the major features of head coaching in college football is the high turnover rate for jobs.[citation needed] With few exceptions (notable ones including Jimmye Laycock, Joe Paterno, John McKay, Tom Osborne, Bill Snyder, Frank Beamer, Bo Schembechler, Woody Hayes, Bobby Bowden, Darrell Royal, and LaVell Edwards) college coaches often routinely change jobs, rarely staying at a school for more than a decade. Some coaches have been known to leave a school and then return to the program after a period of time.

Many head coaches at the college level have a paid staff and as such are more free to concentrate on the overall aspect of the team rather than dealing with the nuances of training regimens and such.

Unlike head coaches at other levels, college coaching staffs are solely responsible for the composition and development of players on the team. The ability to recruit and develop top players plays a major role in success at this level.

College head coaches report to the athletic director to their respective university.

A college coach acts as the face of a team, at an age when many young players do not wish to be hounded by media. They are often called upon to discuss off-the-field incidents such as rule infractions or player antics. Sometimes, the coach becomes a celebrity in his own right, e.g., Lou Holtz. 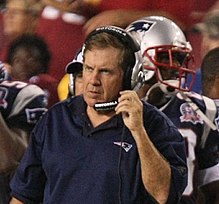 At the professional level, coaches may work for millions of dollars a year. Since he does not have to travel the country recruiting high school players, the head coach at the pro level has much more time to devote to tactics and playbooks, which are coordinated with staff paid even more than at the college level. They typically report to the general manager. Head coaching, due to the lack of job security and long hours, is a very stressful job. With salaries being quite high combined with firings being rather common, many coaches may retire in their early fifties.[citation needed]

Many factors are part of National Football League (NFL) coaches' contracts. These involve the NFL's $11 billion as the highest revenue sport, exceeding the Major League Baseball's (MLB) $7 billion. The NFL's coaches are among the highest-paid professional coaches[4] with professional football salaries topping a 2011 Forbes' article on the highest-paid sports coaches. Bill Belichick was listed at the number one spot for the second year in a row.[5] Additionally, there was not a single MLB or National Hockey League coach making the list.

Another major element of NFL coaches' contracts, negotiated between individual coaches and NFL "teams"/owners, are NFL demanded provisions in the coaches employment contracts, that authorize the employing NFL teams to withhold part of a coach's salary when league operations are suspended, such as lockouts or television contract negotiations.[6]

The average salary for a head coach in the National Football League is $6.45 million a year.[7]

In association football, a head coach has the same responsibilities as in any other sport. For instance, a head coach usually has an option to pick his own coaching staff.[citation needed]

In some countries, there is an individual who may be granted a position as senior coach in which they act as the first assistant of the head coach or run a junior squad in the club. In the absence of a head coach, a senior coach temporarily fulfills his role as an interim (see Caretaker manager).[citation needed]

There is the UEFA Convention on the Mutual Recognition of Coaching Qualifications that has three levels: Pro, A, and B.[8] 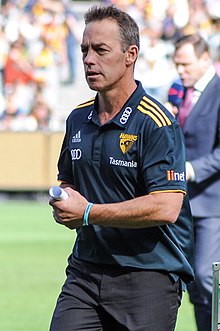 In Australian rules football, the head coach or senior coach, is responsible for developing and implementing appropriate training programs to his players. The senior coach in the AFL is also responsible for determining the rotations and team line ups for each game. Moreover, these coaches are not the only ones involved in team operations, as in AFL teams, there are sometimes up to five different coaches who may each have their own unique responsibilities. For example, there can be a forward, a midfield, and a defence coach, each focusing on a particular position. And thus, each coach will work with players in those certain positions.

Rugby football union clubs have the option of either employing a director of rugby (DoR), a head coach or both. The responsibilities for each role vary between clubs. Generally, if a club decides on employing one of either a DoR or a head coach, they will hold more responsibility than if the club employs individuals for both roles. It has been proposed that the DoR is a club-wide position, providing and ensuring the club is working towards a shared philosophy from youth teams to senior teams.[9][10] Whereas a head coach is focused purely on planning and implementing coaching for the first team; alongside a coaching team consisting of a mixture of defence, attack, forwards, backs, skills and strength and conditioning coaches.[11]