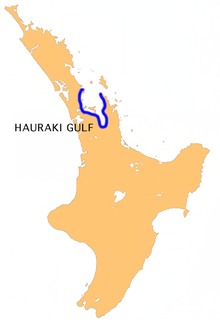 Location of the Hauraki Gulf. 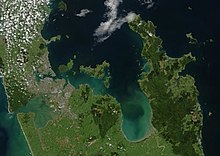 The Hauraki Gulf / Tīkapa Moana is a coastal feature of the North Island of New Zealand. It has an area of 4000 km2,[1] and lies between, in anticlockwise order, the Auckland Region, the Hauraki Plains, the Coromandel Peninsula, and Great Barrier Island. Most of the gulf is part of the Hauraki Gulf Marine Park.

Hauraki is Māori for north wind.[2] In 2014, the gulf was officially named Hauraki Gulf / Tīkapa Moana.[3] The New Zealand Ministry for Culture and Heritage gives a translation of "the mournful sea" for Tīkapa Moana.[4]

Numerous beaches dot the shores of the gulf, many of them well known for swimming and surfing.

During the last glaciation period the gulf was dry land, with the sea level being around 100–110 m (300 ft) lower than at present.[2] The gulf was submerged when the sea reached its current level around 7200 years ago.[5]

In the west of the gulf lie a string of islands guarding the mouth of the Waitematā Harbour, one of Auckland's two harbours. These include Ponui Island, Waiheke Island, Tiritiri Matangi and the iconic dome of Rangitoto Island (a dormant volcano), which is connected to the much older Motutapu Island by a causeway. The islands are separated from the mainland by the Tamaki Strait and Rangitoto Channel.

Other islands in the gulf include Browns Island, Motuihe Island, Pakihi Island, Pakatoa Island, Rakino Island, and Rotoroa Island in the inner gulf, around Waiheke and Rangitoto; Tarahiki Island just east of Waiheke; Motukawao Islands and Whanganui Island in the lee of the Coromandel Peninsula; and Channel Island in the outer gulf.

At the southern end of the gulf is the wide, relatively shallow Firth of Thames. Beyond this lie the Hauraki Plains, drained by the Waihou River and the Piako River. The Hunua Ranges and hills of the Coromandel Peninsula rise on either side of the Firth. 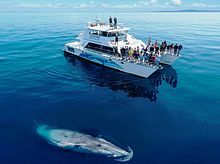 A Bryde's whale with a watching vessel.

An orca swims in Waitematā Harbour, with Auckland CBD in the background.

Some particular common or known animals include bottlenose and common dolphins, the latter sometimes seen in "super schools" of 300-500 animals or more, while various species of whales and orcas are a relatively common sight.[6] There are approximately 25 species of marine mammals in the gulf.[7] Nearly a third of the world's marine mammal species live in or visit the Marine Park.[8]

Among larger cetaceans, Bryde's whales are residents and relatively common in the Gulf, and their presence in these busily travelled waters leads to a large number of ship strikes, with sometimes several of the whales dying each year from collisions with shipping vessels or sport boats. The population remaining is estimated to be between 100-200.[6] In recent years, increases in numbers of migrating baleen whales are confirmed long after the end of hunting era. These are humpback whales, southern blue whales, pygmy blue whales, and southern minke whales. Less frequently, fin whales and sei whales are seen as well. For southern right whales, these whales will possibly become seasonal residents in the gulf as the populations recover (one of two of the first confirmed birth records on New Zealand's main islands since after commercial and illegal whalings were recorded at around Milford and Browns Bay in 2012[9][10]). Sperm whales visit occasionally.[11]

Many of the islands are official or unofficial bird sanctuaries, holding important or critically endangered species like kiwi, takahe, brown teal and grey-faced petrel. Centred on the main conservation island of Tiritiri Matangi and Little Barrier Island, numerous bird species that were locally extinct have been reintroduced in the last decades, while there have also been some naturally occurring bird "re-colonisations", especially after introduced pests were removed from breeding and nesting grounds.[12]

The gulf is a vibrant natural environment, which has seen significant damage during the 20th and early 21st century from human use. Although major study by the Hauraki Gulf Forum in 2011 found that all environmental indicators were still worsening or stable at problematic levels, voluntary coast clean-up groups have collected about 450,000 litres of litter collected from the shoreline, although further conservation efforts are required to maintain the environmental integrity of the gulf. [13]

Particularly damaging were the introduction of industrialised fishing, with for example snapper fishing peaking in the 1970s at more than 10,000 tonnes a year (though even in the 2000s, private fishing of this species is also a considerable factor, weighing in at 400–800 tonnes a year). This severe overfishing, which unbalanced the marine environment by the removal of a main predator in the food chain, led to further degradation, such as a widespread disappearance of kelp beds as they were overtaken by kina barrens.[14] Trawler fishing in general is seen as severely damaging the gulf, and lobster stock are also reported as not rebuilding.[15] It is estimated that today's fish stocks are around 25% of pre-European levels.[13]

Also particularly damaging are the results of nitrogen carried into the gulf from surrounding agricultural land, with almost 90% coming from the dairy-farming runoff into the Firth of Thames.[15]

Other exploitation such as the dredging of the mussel beds of the Firth of Thames, reaching its height in 1961 with an estimated 15 million mussels taken (shortly before collapse of the industry) have led to damages which have not been recovered forty years later, possibly due to the dredging having destroyed the underwater surfaces, and sediment drainage from the agriculture in the Firth of Thames affecting the mussel's viability.[14]

Numerous beaches dot the shores of the gulf, many of them well known for swimming and surfing. Although environmental problems exist around urban areas, with 14 out of 52 beaches in the Auckland Region at least occasionally showing unsafe pollution levels (mostly because of untreated sewage) for bathing, environmental groups are working to clean the beaches and restore their vitality. 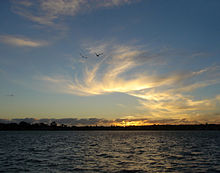 Sunset over the Hauraki Gulf 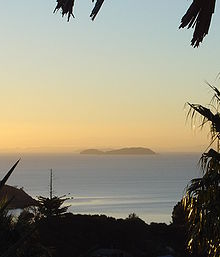 Sunset view of The Noises viewed from Waiheke Island

The park is distinctly different from other conservation areas of New Zealand not only by being a marine environment, but because it is home to more than one million people along its shores and on its islands. It also contains a number of (above-water) wildlife sanctuaries unparalleled in New Zealand.[17]