Originally named Khok Samet Chun (โคกเสม็ดชุน, "shore eugenia knoll"), Hat Yai was a small village until the southern railway was built there, making it one of the major rail hubs of the line. The junction which connected the town of Songkhla with the main route was formerly in the U Tapao area, but was later moved to Khok Samet Chun in 1922 when the U Tapao area turned out to be flood-prone. At that time, Khok Samet Chun had only four residents, but thanks to the investments of Khun Niphat Chinnakorn (謝枢泗, Jia Gi Si, 1886–1972, Hakka Chinese), the railway contractor for the railway line from Nakhon Si Thammarat to Pattani, it quickly grew into a small town.

As the major economic center of lower southern Thailand, Hat Yai has increasingly become a target of terrorism in the separatist campaign conducted by the Patani United Liberation Organisation and similar radical groups.

On April 3, 2005, bomb attacks were carried out at a Carrefour Hypermarket and Hat Yai International Airport, killing two and injuring dozens.

On September 16, 2006 a series of bomb attacks killed four and injured more than 70. Although no group has claimed responsibility, local separatists are presumed to be responsible.[3]

On March 31, 2012, a car bomb exploded in the Lee Gardens Plaza Hotel, killing at least 5 and injuring hundreds. Both Thai nationals and Malaysian tourists were among the victims. The Royal Thai Army believes that members of the Barisan Revolusi Nasional (BRN) group carried out the terrorist attack.

On May 6, 2014, two bombs exploded in front of a convenience store and a police station, injuring 9 people. 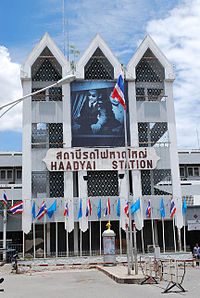 Hat Yai Junction has become the transportation hub of southern Thailand since the railway was constructed. One of the largest railway stations in the south, Hat Yai Railway Station is an international railway station which handles 28 passenger trains per day, including 26 trains served by State Railway of Thailand and 2 trains served by KTMB of Malaysia. Hat Yai is also the hub for local train services in southern Thailand.

Parallel to the railway line is the Asian highway 2. Asian highway 18 originates in Hat Yai and runs south along the east coast of the Malay peninsula.

Hat Yai Bus Terminal is a major transport hub in southern Thailand. It offers bus services that link Hat Yai with nearly every town and city in the southern region as well as other destinations, including Bangkok and Nakhon Ratchasima. Hat Yai also has a minibus terminal which hosts the largest minibus service in southern Thailand. There are also several private minibus services which focus on tourist destinations, including Phuket, Ko Samui, Ko Pha Ngan, Pak Bara Peer in Satun (a gateway to the islands in the southern Andaman Sea), Langkawi, Penang, Kuala Lumpur, and Singapore. The minibus service has gained popularity in recent years as minibuses are considered a faster way to travel.

Hat Yai International Airport (upgraded to an international airport December 1972) is 9 km from downtown, serving destinations throughout Thailand and connecting the city to Kuala Lumpur and Singapore. It is also an important airport for Muslims on pilgrimage to Mecca. The airport is listed as Thailand's 5th busiest airport, serving 4,256,107 passengers in 2018.

Demographically, Hat Yai is notable for a higher proportion of Malay-Muslim and Thai Chinese citizens than other cities of comparable size in other regions of Thailand. The population of Hat Yai was 156,802 as of 2019,[1] ranked 4th in the country after Bangkok, Nonthaburi, and Pak Kret.

Hat Yai has a tropical monsoon climate (Am), which is hot and humid, like other parts of Thailand. Hat Yai has only two seasons; wet and dry. The wet season, which is influenced by monsoon and rain storms, is from April to December, while the sunny dry season is only from January to March. Additionally, there have been occasional floods in Hat Yai due to the heavy rain; it can rain for twenty-two days in November with more than 317 mm of precipitation. 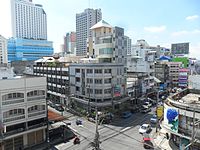 Hat Yai has a reputation for being a shopping destination for both Thais and foreigners. There are numbers of department stores, shopping malls and markets throughout the city. Suntisook Market on Nipat U-tid 1, 2 & 3 roads are among the best-known. Their main products are imported processed food, cosmetics, fabrics, gadgets and electrical appliances. The city's major wet market is located near the railway station. And another one is Kim Yong market on Supasarn Rungsan road.

Kim Yong market (also Gim Yong) is a famous market located in the center of Hat Yai, Songkhla. It was established by Xi Gim Yong (徐金榮), a Chinese man who was an influential businessman, in 1928. The market is divided into 2 parts. The first part is a 2-floor building previously called the “Chaloemthai” cinema. The second part is an outdoor market, alongside the road.

The goods in this market are varied and each part of the market is different. On the first floor of the building, there are fresh foods, such as vegetables, meats, certain seafood, groceries, clothes, snacks, and dry foodstuffs. It is well known that Kim Yong Market has many kinds of dry foodstuffs from China and snacks like chocolates and chips from Malaysia. On the second floor, there are electric appliances which are made in Thailand and China. All of these imported goods are inexpensive because they are tax-free. Outside of the building, many shops and stalls can be found along small streets. Most of the shops sell batiks from Indonesia and Muslim clothes while the majority of stalls sell foods and fruits. Moreover, chestnut is another popular product, which visitors prefer to buy. You can notice chestnut stalls easily by the man who roasts the chestnut and by the smell.

Because of the variety of goods in this market, it is able to attract a large number of people, not only local people but also foreigners and travelers. By noticing a lot of shopping bags in their hands and the excitement on their faces, it is not a surprise that this market is considered as the main artery which nourishes the city's economy.

The city has two large weekend markets, namely Asian Trade and Greenway, which are both located on Kanchanavanit Road. They mainly sell second-hand products, including clothes, shoes, decor and souvenirs. In addition, there are several large shopping centers in the city, including Diana, Odean, Robinson, Central, Siam Nakharin, Big C, Big C Extra, Tesco Lotus and Makro. By the end of 2013, Central Festival, one of the largest shopping centers in Southern Thailand.

An important Buddhist temple is Hat Yai Nai Temple or Wat Hat Yai Nai. It is home to the third largest reclining statue on the planet. People travel from all over Thailand just to pay respect to this statue[citation needed].

Held on the first night of October, Chak Phra is a Buddhist festival specific to the south of Thailand. It is celebrated with Buddha boat processions or sports events like a run up Khao Tang Kuan hill. In September or October at the Chinese Lunar festival, the Thai and Chinese present their offerings to the moon, "queen of the heavens", in gratitude for past and future fortunes.

Hat Yai is also well known for its spectacular celebrations of the Chinese New Year festival. Although Thai elements have been incorporated (for example, Thai pop stars have been invited to perform), the celebration remains distinctively Chinese. “Despite being several generations removed from Hat Yai's original Chinese pioneers, the New Year celebration provides strong evidence that the community is still influenced by and strongly identifies with its Chinese roots.[7]