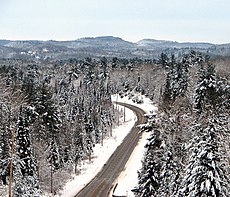 The northern portion of Hastings County is characterized by the rugged landscape of the Madawaska Highlands.

The 14 local municipalities within Hastings County are:

The first boundaries of Hastings County (named for Francis Rawdon-Hastings) was organized for electoral purposes in 1792, and was described as being:

bounded on the east by the westernmost boundary of the county of Lenox, on the south by the bay of Quinte, until it meets a boundary on the easternmost line of the river Trent, thence along the river until it intersects the rear of the ninth concession, thence by a line running north sixteen degrees west until it intersects the river Ottawa or Grand river, thence descending the said river until it meets the northwesternmost boundary of the county of Addington; and the said county of Hastings to comprehend all the islands of the bay of Quinte and the river Trent nearest to the said county, in the whole or in greater part fronting the same.[3]

For the initial elections to the Legislative Assembly of Upper Canada, it was united with Northumberland County and most of Lennox County for purposes of returning one member.[4]

It was situated within the Mecklenburg District, which was later renamed the "Midland District" in 1792.[5]

In 1798, the Parliament of Upper Canada passed legislation to provide, that, at the beginning of 1800:

... the townships of Sidney, Thurlow, the tract of land occupied by the Mohawks, Huntingdon, Hungerford, and Rawdon, do constitute and form the county of Hastings.[6]

The territory withdrawn from the County continued to form part of the Midland District.[7]

In 1821, the newly surveyed townships of Elzevir, Madoc and Marmora were added to the County.[8] While in this time agriculture was the most important industry in Hastings County, by 1822 (when the Marmora Iron Works was approaching its peak production) mining was playing an increasingly more important role in the area's economy.

Prominent citizens of Hastings County and Ameliasburgh Township unsuccessfully petitioned the provincial government for district status during 1817, 1818, 1823 and 1825. After Prince Edward County successfully achieved its own government in 1831, Hastings County continued to send petitions throughout the 30s before finally achieving the status of a separate district in March 1837.[9]

It was constituted as the District of Victoria in 1839 (which continued until its dissolution in 1850).[10] By 1845, the County was declared to consist of the following townships:[11]

Edward Fidlar became the first warden of Hastings County with their first meeting on January 28, 1850. By this time the Hastings County Council was also interested in education and the building of the railroad.

On October 27, 1856 the first railroad train arrived in Belleville and by 1864 around 100 people were employed by the railroad.

In August 1866, discovery of gold at Eldorado, near Madoc, caused great excitement throughout Hastings County as people flooded to the area from all over North America. According to Barnes, "gold has been found in twenty-seven locations spread over nine townships."[17] The railroads and 170 miles (270 km) of good gravel roads opened these areas to settlement by 1880.

In 1889 the Belleville Waterworks was created as a private company, which was then bought by the city of Belleville in 1889. In 1911, Hastings County was the first in the province to appoint a reforestation committee, which was instrumental in passing laws around county forests. Postal service began in the area in 1913.[18]

The figures below are for the Hastings census division, which combines Hastings County, Belleville and Quinte West, along with the Tyendinaga Mohawk Territory.

Following are members of Hastings County Council as of August, 2019:[23]

There are 5 EMS stations in Hastings County with Hastings-Quinte EMS HQ located in Belleville, Ontario.