Advertisement - You can get this game from STEAM
For the French publisher, see L'Harmattan.
For the Maemo release code-named Harmattan, see Maemo. 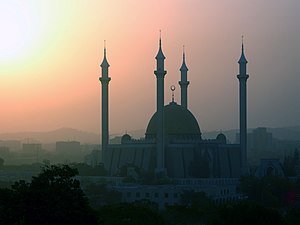 The Harmattan is a season in West Africa, which occurs between the end of November and the middle of March. It is characterized by the dry and dusty northeasterly trade wind, of the same name, which blows from the Sahara Desert over West Africa into the Gulf of Guinea.[1] The name is related to the word haramata in the Twi language.[2] The temperature is cold[3] in most places, but can also be hot[4] in certain places, depending on local circumstances.[5]

The Harmattan blows during the dry season, which occurs during the months with the lowest sun. In this season the subtropical ridge of high pressure stays over the central Sahara Desert and the low-pressure Intertropical Convergence Zone (ITCZ) stays over the Gulf of Guinea. On its passage over the Sahara, the harmattan picks up fine dust and sand particles (between 0.5 and 10 microns).

This season differs from winter, because it is characterized by cold, dry,[3] dust-laden wind, and also wide fluctuations in the ambient temperatures of the day and night. Temperatures can easily be as low as 9 °C (48 °F) all day, but sometimes in the afternoon the temperature can also soar to as high as 30 °C (86 °F), while the relative humidity drops under 5%. 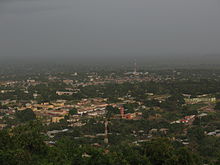 The air is particularly dry and desiccating when the Harmattan blows over the region.[3] The Harmattan brings desert-like weather conditions: it lowers the humidity, dissipates cloud cover, prevents rainfall formation and sometimes creates big clouds of dust which can result in dust storms or sandstorms.[citation needed] The wind can increase fire risk[6] and cause severe crop damage.[7] The interaction of the Harmattan with monsoon winds can cause tornadoes.[1]

In some countries in West Africa, the heavy amount of dust in the air can severely limit visibility and block the sun for several days,[8] comparable to a heavy fog. This effect is known as the Harmattan haze. It costs airlines millions of dollars in cancelled and diverted flights each year.[9][10] When the haze is weak, the skies are clear.[11][12] The extreme dryness of the air may cause branches of trees to die.[13]

Humidity drops to as low as 15%, which can result in spontaneous nosebleeds for some people.[7] Other health effects on humans may include conditions of the skin (dryness of the skin), dried or chapped lips, eyes, and respiratory system, including aggravation of asthma.[14]