Hard Rock Cafe, Inc. is a chain of theme restaurants founded in 1971 by Isaac Tigrett and Peter Morton in London. In 1979, the cafe began covering its walls with rock and roll memorabilia, a tradition which expanded to others in the chain. In 2007, Hard Rock Cafe International (USA), Inc. was sold to the Seminole Tribe of Florida and was headquartered in Orlando, Florida, until April 2018, when the corporate offices were relocated to Davie, Florida.[2][3] As of July 2018, Hard Rock International has venues in 74 countries, including 185 cafes, 25 hotels, and 12 casinos.[4][needs update]

The first Hard Rock Cafe (HRC) opened on June 14, 1971 at Old Park Lane, Mayfair, London, under the ownership of two Americans, Isaac Tigrett and Peter Morton. Hard Rock initially had an eclectic decor, but it later started to display memorabilia.

The chain began to expand worldwide in 1982 with locations in (among others) Toronto, Los Angeles, San Francisco, Chicago, Paris, and Berlin.[5] Hard Rock Cafe locations in the United States vary from smaller, more tourist driven markets (Biloxi, Pigeon Forge, Key West, etc.) to large metropolises (Houston, Philadelphia, New York City, Chicago, Boston, Washington, D.C., etc.). Hard Rock Cafe typically does not franchise cafe locations in the United States. All US cafes are corporate owned and operated, except for cafes in Tampa and Four Winds New Buffalo casino.[6] However, in the transition of the Las Vegas Hard Rock Hotel property originally owned and then later sold to Rank by founder Peter Morton, Morton retained hotel naming rights west of the Mississippi. When Morton sold his Las Vegas Hard Rock Hotel to the Morgans Hotel Group, he also sold those naming rights, which then gave rise to two US franchised hotels (without cafes) in Albuquerque and Tulsa. The Albuquerque hotel no longer pays for the Hard Rock rights and reverted to its former name in June 2013. Additional casino hotels franchised from Morgan's were subsequently opened in Sioux City and Vancouver.

In 1990, The Rank Group, a London-based leisure company, acquired Mecca Leisure Group and continued expansion of the concept in its geographic territory. Rank went on to purchase Hard Rock America from Peter Morton as well as Hard Rock Canada from Nick Bitove. After the completion of these acquisitions, Rank gained worldwide control of the brand. In March 2007, the Seminole Tribe of Florida acquired Hard Rock Cafe International, Inc. and other related entities from Rank for US$965 million.[2]

In 2008, anonymous members of the wait staff criticized the business because of its practice of paying them less than half the official minimum wage in the UK, with the business allocating tips to staff to bring their salaries within the law. Most customers, it was argued, do not realize that they are subsidizing a low wage when they give the tip.[7]

Jon Bon Jovi's guitar on display at the cafe in Moscow

HRC is known for its collection of rock-and-roll memorabilia. The cafes solicit donations of music memorabilia but also purchase a number of items at auctions around the world, including autographed guitars, costumes from world tours and rare photographs; these are often to be found mounted on cafe walls. The collection began in 1979 with an un-signed Red Fender Lead II guitar from Eric Clapton, who was a regular at the first restaurant in London. Clapton wanted management to hang the guitar over his regular seat in order to lay claim to that spot, and they obliged. This prompted Pete Townshend of The Who to give one of his guitars, also un-signed with the note "Mine's as good as his! Love, Pete."[8] Hard Rock's archive includes over 80,000 items,[9] and is the largest private collection of Rock and Roll memorabilia in the world. Marquee pieces from the collection were briefly displayed in a Hard Rock museum named "The Vault" in Orlando, Florida from January 2003 until September 2004. After the closure, items were disbursed to various restaurant locations.[10] The London Vault remains open and free to visitors, located in the retail Rock Shop of the original cafe.[11]

The Hard Rock Café is also in possession of a Bedford VAL 3 axle coach used in the 1967 Beatles film Magical Mystery Tour. The vehicle was completely refurbished after filming. It is currently displayed in the US, but makes regular appearances in events in the UK, especially at the original Hard Rock Cafe in London. In 2001, a competition was run to win the actual bus, but it was never given away and remained with the cafe.

Expansion into other businesses 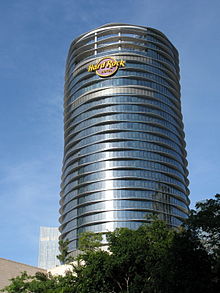 In 1995, Peter Morton spent $80 million to open the Hard Rock Hotel near the Las Vegas Strip in Las Vegas, Nevada. A subsequent $100 million expansion in 1999 nearly doubled the hotel's capacity.[12]

In May 2006, Morton sold the Hard Rock Hotel & Casino, Las Vegas to Morgans Hotel Group for $770 million, including the rights to the Hard Rock Hotel brand west of the Mississippi, including Texas, California, Australia, and Vancouver, British Columbia.[13] The hotel began another expansion in 2007 at a cost of $750 million. The project added 875 rooms in two towers and expanded meeting space.[14] In March 2011, Morgans surrendered control of the property to partner Brookfield Asset Management, citing the high debt on the property in the face of the economic downturn.[15] In April 2018, the Hard Rock Hotel in Las Vegas was sold to Richard Branson with plans to renovate the property under the Virgin Hotels brand.[16]

The Hotel Zoso in Palm Springs, California was converted into a 160-room Hard Rock Hotel and opened in 2014.[20][21] A location in Atlantic City, New Jersey was planned in 2010, but those plans were canceled in 2012; however, in 2017, they acquired from Icahn Enterprises the closed Trump Taj Mahal, which in 2018 was reopened as Hard Rock Hotel & Casino Atlantic City.[22] All-inclusive resorts operate under the Hard Rock brand in the Dominican Republic and Mexico. In 2013, the Hard Rock Rocksino Northfield Park opened as a joint slot machine and track venture., near Cleveland, Ohio. Then in early 2019, it was announced that JACK Cincinnati Casino in Cincinnati was sold for $745 million to Vici Properties and Hard Rock International, with Vici acquiring the land and buildings for $558 million and Hard Rock buying the operating business for $187 million.[23][24] Hard Rock would lease the casino from Vici for $43 million per year, and would rebrand it as Hard Rock Casino Cincinnati.[24][25]

Canada had numerous restaurants but many of them closed, notably the one at Yonge-Dundas Square in Toronto in May 2017, which had been the chain's second location, leaving just two in that country, Niagara Falls, Ont., and the Hard Rock Casino in Coquitlam, B.C.[26]

In 2015, Hard Rock announced a new hotel in Bogotá, Colombia, which will open in 2019. The company had plans to open in the biggest financial district in Colombia, the Centro Internacional, but it revised those plans. The hotel will be located in the exclusive Zona Rosa de Bogotá, home of luxury boutiques.

In July 2019, Hard Rock International announced plans for a casino in Rockford, Illinois, about 75 miles west of Chicago along I-90.[27] Two other proposals were made for the city's lone casino license, but the city council only recommended the Hard Rock proposal to the Illinois Gaming Board, who will decide which site will get the license.[28]

Also in November, Hard Rock announced a new hotel in São Paulo, Brazil, in the heart of popular Paulista Avenue.

Other international locations include:

In March 2006, Hard Rock Cafe International announced that it had licensed the "Hard Rock" name to HRP Myrtle Beach Operations, LLC, to design, build, and operate a $400 million 150-acre (0.61 km2) theme park called Hard Rock Park. Hard Rock Park opened on April 15, 2008 in Myrtle Beach, South Carolina. The park was expected to draw an estimated 30,000 visitors per day, promised to create more than 3,000 jobs, and was billed as the largest single investment in South Carolina's history. It planned to feature a large concert arena and six zones with more than 40 attractions. HRP Myrtle Beach Operations, LLC, filed for Chapter 11 on September 25, 2008. The company hoped to re-open in 2009 after restructuring.[30] On January 2, 2009 after failing to attract a buyer with a minimum $35 million bid for over two months, Hard Rock Park asked a Delaware Bankruptcy Court to convert the filing to Chapter 7, triggering immediate liquidation of assets to pay off creditors, and closing the park.[31]

New owners renamed the venue Freestyle Music Park and planned to reopen retaining a music-theme, but without the Hard Rock name, by Memorial Day, 2009. The park only operated one additional year and then closed, due to poor attendance.[32]

In August 2016, it was reported that the Miami Dolphins' stadium in Miami Gardens, Florida would be renamed Hard Rock Stadium. Super Bowl LIV was held there on February 2, 2020.[33]

The Hard Rock Club is a sponsored bar at the Canadian Tire Centre, with Hard Rock branding and memorabilia.[34] The stadium formerly housed Ottawa's first Hard Rock Café when it opened as The Palladium on January 15, 1996, and for many years when it was known as the Corel Centre. The café closed on August 8, 2002 and was replaced with the Frank Finnigan's restaurant.[35] Since October 17, 2013, the restaurant is known as Chek Point, and is sponsored by SportChek.[36] The Hard Rock Club bar was announced on October 9, 2018 and opened near the former Hard Rock Café. The bar features memorabilia from over a dozen artists, restaurant-style seating, and dedicated stadium seating.[34]

Acquisition by the Seminole Tribe of Florida

On December 7, 2006, Rank sold its Hard Rock business to the Seminole Tribe of Florida for $965 million. Included in the deal were 124 Hard Rock Cafes, four Hard Rock Hotels, two Hard Rock Hotel and Casino Hotels, two Hard Rock Live! concert venues, and stakes in three unbranded hotels. Rank retained the Hard Rock Casino in London, and rebranded it the G Casino Piccadilly. The Hard Rock Hotel and Casino in Las Vegas was also not part of the deal, as it was sold by Peter Morton to Morgans Hotel Group in May 2006.[37] The final takeover was mired in controversy, due to a payment clause in a contract with one casino developer, Power Plant Entertainment. Power Plant and the Seminoles announced a settlement in April 2007 which both sides called equitable.[38] On January 8, 2007, Rank shareholders approved the Seminoles' $965 million offer. The Tribe announced it had finalized the deal on March 11, 2007.[39]

On June 22, 2008, the Seminole Hard Rock Hotel & Casino Hollywood began "Vegas-style" table gambling in addition to the Class II slots already in operation. To win approval for the table games, which were barred under Florida law, the Seminole Tribe paid the State of Florida $100 million as part of a 25-year pact signed by Governor Charlie Crist. On July 3, 2008, the Florida Supreme Court ruled that the governor's agreement was unconstitutional, but table games continue to operate because the Federal Department of the Interior approved the now-invalid pact with the state.[40]