Harare Province Zimbabwe Enlarge
Capital of Zimbabwe
This article is about the capital city of Zimbabwe. For the city in Ethiopia, see Harar.
Capital city and Province in Zimbabwe

Harare (/həˈrɑːreɪ/;[3] officially Salisbury until 1982)[4] is the capital and most populous city of Zimbabwe. The city proper has an area of 960.6 km2 (371 mi2) and an estimated population of 1,606,000 in 2009,[5] with 2,800,000 in its metropolitan area in 2006. Situated in north-eastern Zimbabwe in the country's Mashonaland region, Harare is a metropolitan province, which also incorporates the municipalities of Chitungwiza and Epworth.[6] The city sits on a plateau at an elevation of 1,483 metres (4,865 feet) above sea level and its climate falls into the subtropical highland category.

The city was founded in 1890 by the Pioneer Column, a small military force of the British South Africa Company, and named Fort Salisbury after the UK Prime Minister Lord Salisbury. Company administrators demarcated the city and ran it until Southern Rhodesia achieved responsible government in 1923. Salisbury was thereafter the seat of the Southern Rhodesian (later Rhodesian) government and, between 1953–63, the capital of the Central African Federation. It retained the name Salisbury until 1982, when it was renamed Harare on the second anniversary of Zimbabwean independence from the United Kingdom.

See also: Timeline of Harare
"Fort Salisbury" redirects here. It is not to be confused with Fort at Salisbury Point.

The Pioneer Column hoists the Union Jack on the kopje overlooking the city, 13 September 1890

The Pioneer Column, a military volunteer force of settlers organised by Cecil Rhodes, founded the city on 12 September 1890 as a fort.[7][8] They originally named the city Fort Salisbury after The 3rd Marquess of Salisbury, then-Prime Minister of the United Kingdom, and it subsequently became known simply as Salisbury. The Salisbury Polo Club was formed in 1896.[9] It was declared to be a municipality in 1897 and it became a city in 1935.[10]

The area at the time of founding of the city was poorly drained and earliest development was on sloping ground along the left bank of a stream that is now the course of a trunk road (Julius Nyerere Way). The first area to be fully drained was near the head of the stream and was named Causeway as a result. This area is now the site of many of the most important government buildings, including the Senate House and the Office of the Prime Minister, now renamed for the use of the President after the position was abolished in January 1988.[11]

Salisbury was the capital of the self-governing British colony of Southern Rhodesia from 1923, and of the Federation of Rhodesia and Nyasaland from 1953–63. Ian Smith's Rhodesian Front government declared Rhodesia independent from the United Kingdom on 11 November 1965, and proclaimed the Republic of Rhodesia in 1970. Subsequently, the nation became the short-lived state of Zimbabwe Rhodesia, it was not until 18 April 1980 that the country was internationally recognised as independent as the Republic of Zimbabwe.

The name of the city was changed to Harare on 18 April 1982, the second anniversary of Zimbabwean independence, taking its name from the village near Harare Kopje of the Shona chief Neharawa, whose nickname was "he who does not sleep".[12] Prior to independence, "Harare" was the name of the black residential area now known as Mbare.

In the early twenty-first century, Harare has been adversely affected by the political and economic crisis that is plaguing Zimbabwe, after the contested 2002 presidential election and 2005 parliamentary elections. The elected council was replaced by a government-appointed commission for alleged inefficiency, but essential services such as rubbish collection and street repairs have rapidly worsened, and are now virtually non-existent. In May 2006, the Zimbabwean newspaper the Financial Gazette, described the city in an editorial as a "sunshine city-turned-sewage farm".[13] In 2009, Harare was voted to be the toughest city to live in according to the Economist Intelligence Unit's livability poll.[14] The situation was unchanged in 2011, according to the same poll, which is based on stability, healthcare, culture and environment, education, and infrastructure.[15]

In May 2005, the Zimbabwean government demolished shanties, illegal vending sites, backyard cottages in Harare, Epworth and the other cities in the country in Operation Murambatsvina[16] ("Drive Out Trash"). It was widely alleged[weasel words] that the true purpose of the campaign was to punish the urban poor for supporting the opposition Movement for Democratic Change and to reduce the likelihood of mass action against the government by driving people out of the cities.[citation needed] The government claimed it was necessitated by a rise of criminality and disease.[citation needed] This was followed by Operation Garikayi/Hlalani Kuhle (Operation "Better Living") a year later which consisted of building concrete housing of poor quality.[citation needed].

In late-March 2010, Harare's Joina City Tower was finally opened after fourteen years of delayed construction, marketed as Harare's new Pride.[17] Initially, uptake of space in the tower was low, with office occupancy at only 3% in October 2011.[18] By May 2013, office occupancy had risen to around half, with all the retail space occupied.[19]

The Economist Intelligence Unit rated Harare as the world's least liveable city out of 140 surveyed in February 2011,[20] rising to 137th out of 140 in August 2012.[21] In 2018, the Harare was ranked 137 out of the 140 surveyed cities by The Economist Intelligence Unit's Global Liveability Ranking, making it the World's sixth least liveable city.[22]

During late-2012, plans to build a new capital district in Mt. Hampden, about twenty kilometres (12 miles) north-west of Harare's central business district, were announced and illustrations shown in Harare's daily newspapers. The location of this new district would imply an expansion into Zvimba District. The plan generated varied opinions.[23][needs update]

In November 2017, the biggest demonstration in the history of the Republic of Zimbabwe was held in Harare which led to the forced resignation of the long-serving 93-year-old President of Zimbabwe, Robert Mugabe an event which was part of the first successful coup in Zimbabwe.[25][26]

The city sits on one of the higher parts of the Highveld plateau of Zimbabwe at an elevation of 1,483 metres (4,865 feet). The original landscape could be described as a "parkland".[27]

The Northern and North Eastern suburbs of Harare are home to the more affluent population of the city including former president Robert Mugabe who lived in Borrowdale Brooke.[28] These northern suburbs are often referred to as 'dales' because of the common suffix -dale found in some suburbs such as Avondale, Greendale and Borrowdale. The dwellings are mostly low density homes of 3 bedrooms or more and these usually are occupied by families.[citation needed] 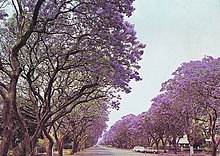 Under the Köppen climate classification, Harare has a subtropical highland climate (Köppen Cwb), an oceanic climate variety. Because the city is situated on a plateau, its high altitude and cool south-easterly airflow cause it to have a climate that is cooler and drier than a tropical or subtropical climate.

The average annual temperature is 17.95 °C (64.3 °F), rather low for the tropics. This is due to its high altitude position and the prevalence of a cool south-easterly airflow.[29]

The average annual rainfall is about 825 mm (32.5 in) in the southwest, rising to 855 mm (33.7 in) on the higher land of the northeast (from around Borrowdale to Glen Lorne). Very little rain typically falls during the period May to September, although sporadic showers occur most years. Rainfall varies a great deal from year to year and follows cycles of wet and dry periods from 7 to 10 years long. Records begin in October 1890 but all three Harare stations stopped reporting in early 2004.[30]

The climate supports a natural vegetation of open woodland. The most common tree of the local region is the Msasa Brachystegia spiciformis that colours the landscape wine red with its new leaves in late August. Two introduced species of trees, the jacaranda and the flamboyant from South America and Madagascar respectively, which were introduced during the colonial era, contribute to the city's colour palette with streets lined with either the lilac blossoms of the jacaranda or the flame red blooms from the flamboyant. They flower in October/November and are planted on alternative streets in the capital. Also prevalent is bougainvillea.

Harare has been the location of several international summits such as the 8th Summit of the Non-Aligned Movement (6 September 1986) and Commonwealth Heads of Government Meeting 1991.[35] The latter produced the Harare Declaration, dictating the membership criteria of the Commonwealth. In 1998, Harare was the host city of the 8th Assembly of the World Council of Churches.[36]

In 1995, Harare hosted most of the 6th All-Africa Games, sharing the event with other Zimbabwean cities such as Bulawayo and Chitungwiza. It has hosted some of the matches of 2003 Cricket World Cup which was hosted jointly by Kenya, South Africa and Zimbabwe. Several of the matches were also held in Bulawayo. Harare also hosted the ICC Cricket 2018 World Cup Qualifier matches in March 2018.[37]

The city is also the site of one of the Harare International Festival of the Arts (HIFA), which has featured such acclaimed artists as Cape Verdean singer Sara Tavares.[38]

Reality TV shows shot in Harare include Battle of the Chefs: Harare, which was screened by the Zimbabwe Broadcasting Corporation.

Harare is Zimbabwe's leading financial, commercial, and communications centre, as well as a trade centre for tobacco, maize, cotton, and citrus fruits. Manufacturing, including textiles, steel, and chemicals, are also economically significant, as is local gold mining.[citation needed]

The public transport system within the city includes both public and private sector operations. The former consist of ZUPCO buses and National Railways of Zimbabwe commuter trains. Privately owned public transport comprised licensed station wagons, nicknamed emergency taxis until 1993, when the government began to replace them with licensed buses and minibuses, referred to officially as commuter omnibuses.[39]

The National Railways of Zimbabwe operates a daily overnight passenger train service that runs from Harare to Mutare and another one from Harare to Bulawayo, using the Beira–Bulawayo railway.[40] Harare is linked by long-distance bus services to most parts of Zimbabwe.

The city is crossed by Transafican Highway 9 (TAH 9), which connects it to the cities of Lusaka and Beira.

The University of Zimbabwe was founded in 1952, the country's oldest university, is located in Harare, as are several other colleges and universities.

Football is most popular among the people of Harare. Harare is home to Harare Sports Club ground. It has hosted many Test, One Day Internationals and T20I Cricket matches. Harare is also home to the Zimbabwe Premier Soccer League clubs Dynamos F.C., Harare City, Black Rhinos F.C. and CAPS United F.C..[41] The main stadiums are National Sports Stadium and Rufaro Stadium.

The state-owned ZBC TV is the only free to air TV channel in the city.[42] The majority of the households rely on the South African-based satellite television distributor, DStv for better entertainment, news and sport across Africa and the world.

Harare has co-operation agreements and partnerships with the following towns:[44]