Hans Peter Wilhelm Arp (16 September 1886 – 7 June 1966), better known as Jean Arp in English, was a German-French sculptor, painter, and poet, and worked in other media such as torn and pasted paper. He was known as Dadaist and abstract artist.

Arp was born in Straßburg (now Strasbourg), the son of a French mother and a German father, during the period following the Franco-Prussian War when the area was known as Alsace-Lorraine (Elsass-Lothringen in German) after France had ceded it to Germany in 1871. Following the return of Alsace to France at the end of World War I, French law determined that his name become "Jean". Arp would continue referring to himself as "Hans" when he spoke German.[1]

In 1904, after leaving the École des Arts et Métiers in Straßburg, he went to Paris where he published his poetry for the first time. From 1905 to 1907, Arp studied at the Kunstschule in Weimar, Germany, and in 1908 went back to Paris, where he attended the Académie Julian. Arp was a founder-member of the Moderne Bund in Lucerne, participating in their exhibitions from 1911 to 1913.[2]

In 1912, he went to Munich, called on Wassily Kandinsky, the influential Russian painter and art theorist, was encouraged by him in his researches and exhibited with the Der Blaue Reiter group.[3] Later that year, he took part in a major exhibition in Zürich, along with Henri Matisse, Robert Delaunay and Kandinsky.[3] In Berlin in 1913, he was taken up by Herwarth Walden, the dealer and magazine editor who was at that time one of the most powerful figures in the European avant-garde.[3]

In 1915, he moved to Switzerland to take advantage of Swiss neutrality. Arp later told the story of how, when he was notified to report to the German consulate in Zurich,[4] he pretended to be mentally ill in order to avoid being drafted into the German Army: after crossing himself whenever he saw a portrait of Paul von Hindenburg,[3] Arp was given paperwork on which he was told to write his date of birth on the first blank line. Accordingly, he wrote "16/9/87"; he then wrote "16/9/87" on every other line as well,[4] then drew one final line beneath them and, "without worrying too much about accuracy", calculated their sum.[5] Hans Richter, describing this story, noted that "they [the German authorities] believed him."[4] 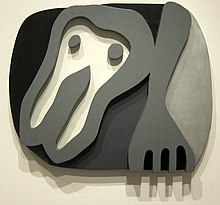 It was at an exhibition that year where he first met Sophie Taeuber, a dancer and artist; they married a few years later.

In 1916, Hugo Ball opened the Cabaret Voltaire, which was to become the center of Dada activities in Zurich for a group that included Arp, Marcel Janco, Tristan Tzara, and others.[6] In 1920, as Hans Arp, along with Max Ernst and the social activist Alfred Grünwald, he set up the Cologne Dada group. However, in 1925, his work also appeared in the first exhibition of the surrealist group at the Galérie Pierre in Paris.[1]

In 1926, Arp moved to the Paris suburb of Meudon. In 1931, he broke with the Surrealist movement to found Abstraction-Création, working with the Paris-based group Abstraction-Création and the periodical, Transition. Beginning in the 1930s, the artist expanded his efforts from collage and bas-relief to include bronze and stone sculptures.[7] He produced several small works made of multiple elements that the viewer could pick up, separate, and rearrange into new configurations.[8]

Throughout the 1930s and until the end of his life, he wrote and published essays and poetry. In 1942, he fled from his home in Meudon to escape German occupation and lived in Zürich until the war ended.

Arp visited New York City in 1949 for a solo exhibition at the Buchholz Gallery. In 1950, he was invited to execute a relief for the Harvard University Graduate Center in Cambridge, Massachusetts and would also be commissioned to do a mural at the UNESCO building in Paris. Arthur and Madeleine Lewja, of Galerie Chalette, who had known Arp in Europe, became his gallery representatives in New York in the late 1950s, and were instrumental in establishing his reputation on the American side of the Atlantic.[9]

In 1958, a retrospective of Arp's work was held at the Museum of Modern Art in New York City, followed by an exhibition at the Musée National d'Art Moderne, Paris, France, in 1962. In 1972, the Metropolitan Museum of Art showcased Jean Arp's work from the Lejwa's collection and a few works lent by Arp's widow, Marguerite Arp. The exhibition was expanded and traveled as "Arp 1877–1966," first exhibited at the Solomon R. Guggenheim Museum and then shown in seven museums in the United States and six in Australia.[10] Organized by the Minneapolis Institute of Arts and the Wurttembergischer Kunstverein of Stuttgart, a 150-piece exhibition titled "The Universe of Jean Arp" concluded an international six-city tour at the San Francisco Museum of Modern Art in 1986.[11]

The Musée d'art moderne et contemporain of Strasbourg houses many of his paintings and sculptures.

Arp's career was distinguished with many awards including the Grand Prize for sculpture at the 1954 Venice Biennale, a sculpture prizes at the 1964 Pittsburgh International, the 1963 Grand Prix National des Arts, the 1964 Carnegie Prize, the 1965 Goethe Prize from the University of Hamburg, and then the Order of Merit with a Star of the German Republic.[12]

Arp and his first wife, the artist Sophie Taeuber-Arp, became French nationals in 1926.[2] In the 1930s, they bought a piece of land in Clamart and built a house at the edge of a forest. Influenced by the Bauhaus, Le Corbusier and Charlotte Perriand, Taeuber designed it.[13] She died in Zürich in 1943. After living in Zürich, Arp was to make Meudon his primary residence again in 1946.[14]

There are three Arp foundations in Europe: The Fondation Arp in Clamart preserves the atelier where Arp lived and worked for most of his life; about 2,000 visitors tour the house each year. The Fondazione Marguerite Arp-Hagenbach in Locarno, Switzerland, was founded by Arp's second wife, Marguerite Arp-Hagenbach.[13] A foundation dedicated to Arp, named Stiftung Hans Arp und Sophie Taeuber-Arp e.V., was established in 1977 by the dealer Johannes Wasmuth in consultation with Marguerite Arp-Hagenbach and owns the largest collection of works by Arp and holds the copyright of all his works. It has research centre and office in Berlin, and an office in Rolandseck, Germany.[16]