The first phase of the system is composed of two sections: Line 2A from Cat Linh to Ha Dong (Cát Linh Line) and Line 3 from Nhon to Hanoi Station (Văn Miếu Line), expected to commence operations in late 2019 and 2023, respectively. The construction period has been beset with financial difficulties, slow construction progress and industrial accidents.[2]

The system will eventually consist of 8 lines with a total length of 318 km, and is initially expected to carry 200,000 passengers per day.

In 2017, Tokyo Metro opened its affiliate in Hanoi, which is set to be the service operator.[3]

As the capital city of Vietnam, Hanoi's population is growing rapidly. As of 2010 (the year construction started on the first line), Hanoi's population was around 6,910,000. Hoàn Kiếm District and Ba Đình District are the districts with the highest population density.[4] The government expects the population of Hanoi to increase to 8,000,000 by 2030.[5] The growing population would affect the city's operation and development.[6] To solve this issue, the Vietnamese government and the Hanoi People's Committee proposed to build an urban rail transit system, first proposed in the late 1990s.

In 1998, the Vietnamese government revised and agreed the “Hanoi Capital to 2020 Master Plan” which suggested that Hanoi prioritise the building of a rail transit system, with a target to build 5 lines.[7] The "Overall Plan for the Development of Vietnam's Railway Transportation Industry to 2020", released in 2002, and the "2005-2010 Economic and Social Development Plan for 2006-2010", released in 2006, both suggested the same and aimed to finish the metro system by 2010.

However, the start of construction was delayed continually as the government first required the consultant companies from China, France and Japan, such as SYSTRA and Japan International Cooperation Agency, to finish feasibility studies which ran from 2004–2007. These three companies suggested the Hanoi government build a network consisting of 6 lines. Finally, in 2008, the Vietnamese government approved the construction of the suggested lines, which they divided into several phases.[8][9]

According to the Prime Minister's decision approving the transport development of Hanoi by 2030 and vision to 2050 (519/QD-TTg dated 31 March 2016),[10] the Hanoi Metro system will consist of 8 lines, including elevated and underground sections. The Ministry of Transport (MoT) and the Hanoi People's Committee (HPC) will both be investors in the project. Phase 1 includes Line 2A and Line 3, which are both currently under construction.

Under-construction station of Line 2A, August 2017

The 13.1 km line, consisting of 12 stations (all elevated), and connecting the districts Dong Da, Thanh Xuan and Ha Dong, will be the first operational line in the metro system. This line is constructed using Official Development Assistance (ODA) from China with a total investment of US$868 million. The China Railway Sixth Group is the EPC (Engineering, Procurement and Construction) contractor for the project, and the Ministry of Transport (Vietnam) is an investor.[11][12]

The construction was started on 10 October 2011 and was initially targeted to begin operations in 2016. In 2016, it was announced that the completion date was to be pushed back to early 2018. However, due to funding and land acquisition issues, construction wasn't completed until September 2018,.[13] Following completion, the pilot run and testing was conducted from September to December 2018. Line 2A was scheduled to commence operations in February 2019, before the holidays of Lunar New Year,[14] but was postponed for the sixth time as some station construction works remained incomplete. Transport Minister Nguyen Van The had hopes that operations would begin in April 2019.

On 30 April 2019, a representative from the Railway Project Management Board informed the press that the line was not yet operational, the reason stated being that the system had not yet been issued with a safety certificate and it had not been accepted by the State Acceptance Council. By the deadline of 30 April 2019, the General Chinese Contractor had not completed some stations, depot areas, escalator roofs for stations, drainage connections for Ring Road Station 3, landscaping, trees, electricity and ticketing systems.[15]

After multiple delays, the trial run was restarted on 28 October 2019, to last for 20 days. However, the operation begin date remains unconfirmed.

The Hanoi Metro Rail System Project (Line 3: Nhon - Hanoi Station section) is in line with the Prime Minister's decision approving the transport development of Hanoi by 2030 and vision to 2050 (519/QD-TTg dated 31 March 2016). The project has the Hanoi Metropolitan Railway Management Board, French government, Asian Development Bank and European Investment Bank as the investors, and will be built in two phases. Phase 1 is 12.5 km long in total and consists of 12 stations,[16] with 8.5 km elevated and 4 km underground, and will serve residents from districts such as Nam Tu Liem, Bac Tu Liem, Cau Giay, Ba Dinh, Dong Da and Hoan Kiem.

Construction for Line 3 began in 2010 and was initially targeted to commence service in 2018. However, in 2017, it was announced that the construction will not complete until 2021, and the operational date will be pushed back to 2022. In July 2018, the Hanoi Metropolitan Railway Management Board (MRB) announced that only 43% of the work for Line 3 has been completed and the launch date will most likely be delayed until early 2023. 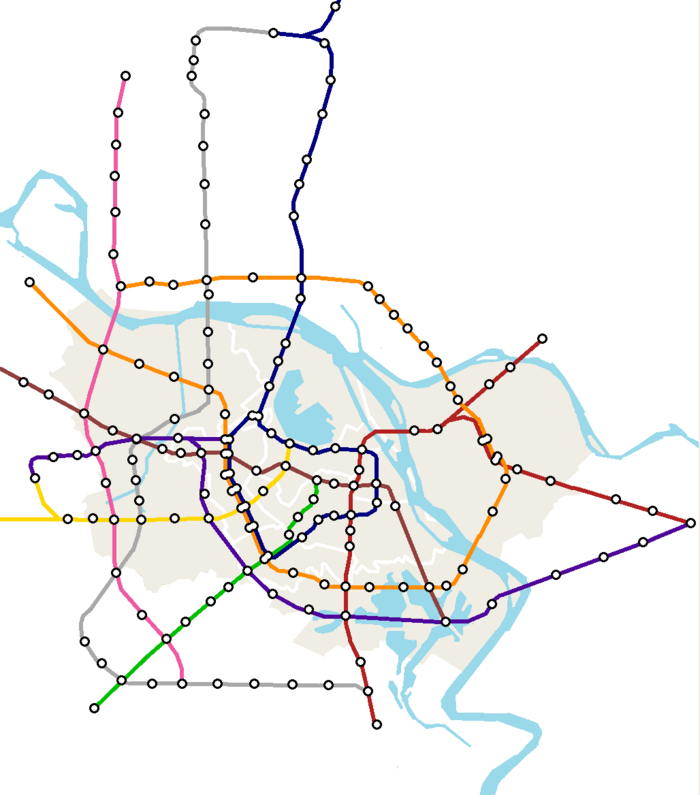 The Ngoc Hoi - Gia Lam section of Metro Line 1 is 15.4 km long and elevated (including 8.9 km elevated, 1.7 km bridge and 4.8 km on surface). The line has the Railway Project Management Unit (RPMU) as its investor and Ministry of Transport as project owner. Its budget is from Japanese ODA. Currently it is in the detailed design phase.

The line will be completed in 3 phases:

This section is 42 km in length, connecting Noi Bai Airport with the city center. There will be 32 stations and 2 depots. The 4 phases of the project are:

In 2012, the project was expected to start in 2017 but the commencement date has now been postponed. It will be 38.4 km long with 17 stations and 2 depots. Right now feasibility study is carried out by the Japan International Cooperation Agency (JICA). Its project owner is the Hanoi Metropolitan Railway Management Board. 2 phases are:

Metro line 6's total length is 43 km with 29 stations and 2 depots. The route runs mainly on the current national track system, connecting the southern districts to the northern ones and Noi Bai airport (T2 terminal).

Metro line 7 is 27.6 km long with 23 stations and 1 depot at Me Linh. The route runs in the north to the south, connecting Me Linh urban area to urban area series in the midst of ring roads 3 and 4 and downtown in the west of Hanoi.

Metro line 8 is 37.4 km long with 26 stations and 2 depots. The underground section is from Mai Dich to Linh Nam, and elevated sections are 2 parts: Son Dong to Mai Dich and Linh Nam to Duong Xa.

Each train will consist of 4 carriages, with capacity for over 1,200 passengers. Each carriage weighs around 35 tons, is 19 meters long, 3.8 meters high, and 2.8 meters wide. The first train arrived in Hanoi in March 2017 via the port of Hai Phong. The CRRC supplied a total of 13 four-car train-sets in 2018, which are all currently stabled at a depot at Phu Luong, east of Yen Nghia.[17]

The trains' exteriors are painted green, and the seal of the Hanoi Temple of Literature, which is the symbol Khue Van of Hanoi, is shown on the front of the train, and the line name “Cat Linh - Ha Dong” is displayed along the bottom in white.

On 17 January 2017, Hanoi Metro Company signed a contract with French locomotive manufacturer Alstom to supply the rolling stock for Line 3, which will come from its Alstom Metropolis series. The current order is for 10 train sets, costing around US$128 million. The trains features an air-conditioning system, speakers, automatic LED lights. The interior is wheelchair accessible, and also includes dedicated space and seating for senior citizens. Each train can carry 950 passengers.[18] First four-car trains were shipped from the port of Dunkirk, on 9 September 2020[19].

The cyan, pink and grey of the exterior design symbolises rice seeding leaves and dragon fruit, some of the main products in Vietnam.[20] Additionally, like Line 2A, the seal of the Hanoi Temple of Literature is displayed on the front of the train.

The ticket system will allow for connection between all routes and will be useable with other public transportation such as bus, taxi, etc. The tickets will be available for purchase at the terminal (ticket office or vending machine), using a modern, compact form of ticket (similar to an ATM card). Tickets will use modern technology, with value retention and high security.

There will be many types of tickets for passengers to choose from: Tickets take turns, Ticket by day, week, month, Group ticket and Electronic ticket (IC Card) combines many other gadgets.