Enlarge Finland Finnish language
This article is about the town in Finland. For other uses, see Hanko (disambiguation).
Municipality and town in Uusimaa, Finland

Hanko (Finnish pronunciation: [ˈhɑŋko]; Swedish: Hangö) is a bilingual port town and municipality on the south coast of Finland, 130 kilometres (80 mi) west of Helsinki. Its current population is 8,182 (31 July 2020),[2] with a majority being Finnish speakers and a strong minority being Swedish speakers (44%).[3]

The Hanko Peninsula, on which the city is located, is the southernmost tip of continental Finland. The soil is a sandy moraine, and vegetation consists mainly of pine and low shrubs, mostly Calluna. Hanko is known for its beautiful archipelago.

A scrollable panorama shot from the water tower shows the typical small-town architecture, with mostly wooden buildings. Some of the archipelago is also visible. The view is, left to right, from east to southwest. The photo was taken at noon, so the sun is due south.

The town has a coastline of approximately 130 km (80 mi), of which 30 km (20 mi) are sandy beaches. There are also over 90 small islands and islets within the city limits.

The skyline of Hanko is dominated by the church and the water tower. Both of them received their current appearance after World War II, as their predecessors were either damaged or destroyed by the Soviet Armed Forces.

Hanko has a humid continental climate (Köppen Dfb), similar to other locations in southern Finland.

Restaurants by the marina in the busy summer tourist season.

The Hangon Regatta is a traditional fixture on the Finnish social scene, and is the town's main summer event. Sailing enthusiasts attend to compete, but there are also others, mostly young people, with little or no interest in sailing, who attend only in order to party and drink. The latter constitute the so-called "Regatta tail", which is not appreciated by most of the town's residents.

Several sandy beaches and a multitude of leisure harbors attract tourists during the summer months. 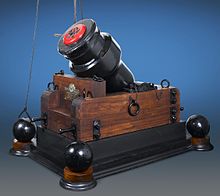 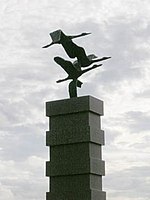 The site was already known by sailors in the 15th century. Petroglyphs from that time are carved into the rock at the Hauensuoli (Swedish: Gäddtarmen, English: Pike's Gut) island.

Hanko has a long history of wars and battles. The Battle of Gangut between Swedish and Russian navies was fought in 1714 in the archipelago north of the peninsula. The battle was the first-ever victory of the Russian regular fleet.

The fortification works on the Hanko Peninsula had already been started by the end of the 18th century, when the Swedish constructed three separate forts on the outlying islands. The forts were taken over by Russia in 1809, and were later bombarded by the Royal Navy during the Crimean War and were eventually blown up during the hostilities by their own defenders.

The city was founded in 1874, soon after the Hanko-Hyvinkää railway was inaugurated in 1872. The Imperial Charter for the city was granted by Tsar Alexander II.

In the late 19th and early 20th centuries, Hanko was the port of choice for emigrants leaving Finland for a new life in North America. A memorial statue, showing birds in flight, commemorates this.

In the late 19th century, while Finland was still a Grand Duchy under Russia, Hanko was a popular spa resort for the Russian nobility. Some of the buildings from that period survive, notably the Hanko Casino (which is not a gambling establishment, but a former banquet hall of the spa). It is currently a restaurant. The Hotel Continental (1901) (now the Hotel Regatta) was designed by architect Lars Sonck in the notable Jugendstil style of the time; after falling into disrepair, the hotel was restored to its former glory in 2013.

The Bengtskär lighthouse, situated 25 km (16 mi) southwest of Hanko, is the tallest (52 m or 171 ft) in the Nordic countries. It was built in 1906 and was the first lighthouse museum in Finland.

The water tower and church in Hanko. They were rebuilt after the war, having been destroyed by the Soviets. 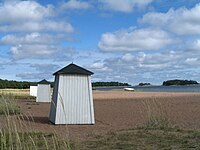 Långsanda, one of the several beaches in Hanko.

In the Moscow Peace Treaty that ended the Winter War on 13 March 1940, Hanko was leased to the Soviet Union as a naval base for a period of 30 years. During the Continuation War, Soviet troops were forced to evacuate Hanko in early December 1941. The Soviet Union renounced the lease formally in the Paris peace treaty of 1947. As a curiosity, it can be noted that the short Russo-Finnish front across the base of the peninsula on the Finnish side was held in part by volunteer troops from Sweden. A museum has been established at this location, among the trenches and other remnants of the war.

The role of the Hanko naval base was replaced by Porkkala in the armistice between Finland and the Soviet Union of 19 September 1944, but it was returned to Finland in January 1956.

Results of the 2011 Finnish parliamentary election in Hanko:

The following sports clubs are located in Hanko:

Hanko is twinned with: