The Han conquest of Nanyue was a military conflict between the Han empire and the Nanyue kingdom in modern Guangdong, Guangxi, and Northern Vietnam. During the reign of Emperor Wu, the Han forces launched a punitive campaign against Nanyue and conquered it in 111 BC.

To the regions south of China, Zhao Tuo had established himself as the King of Nanyue.[1][2] Zhao was a Qin dynasty military officer from Zhending in northern China.[2] The Han frontier in the south was not threatened and there was no indication that Zhao Tuo would encroach on Han territory.[1] In 196 BC, Emperor Gaozu sent Lu Jia on a diplomatic mission to Nanyue to officially recognize Zhao Tuo.[1] Nevertheless, relations between Han and Nanyue were sometimes strained.[3] Zhao Tuo resented Empress Lü's ban on exports of metal wares and female livestock to Nanyue.[3] In 183 BC, he proclaimed himself the "Martial Emperor of the South" (南武帝), which implied a perceived status on equal footing with the Han emperor.[4] Two years later, Nanyue attacked the Changsha Kingdom, a constituent kingdom of the Han empire.[4] In 180 BC, Lu Jia led a diplomatic mission to Nanyue.[3] During negotiations, he succeeded in convincing Zhao Tuo to give up on his title as emperor and pay homage to Han as a nominal vassal.[3] 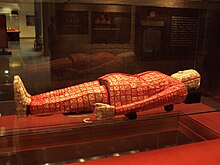 In 135 BC, King Zhao Mo of Nanyue appealed to the Han court for help against attacking Minyue forces.[5] The Han court responded swiftly and this led to Zhao Mo's agreement to send his son, Prince Zhao Yingqi, to serve in the palace at Chang'an.[6] Even though Nanyue neglected to pay regular homage to the Han court, the court had its attention focused on other commitments and was not set on forcing the issue.[5]

At the Nanyue court in 113 BC, the Queen Dowager of Nanyue suggested incorporating Nanyue as a kingdom under the suzerainty of the Han empire, thus formally integrating the kingdom on the same terms as the other kingdoms of the Han empire.[6] She was Chinese herself and was married to Zhao Yingqi.[6] However, many Nanyue ministers opposed this suggestion.[6] Lü Jia was the primary Nanyue official to oppose the idea and he led the opposition against the Queen Dowager.[5] In 112 BC, the opposition retaliated violently and executed the Queen Dowager, a provocation that led to the mobilization of a large Han naval force into Nanyue.[5]

The Han forces comprised six armies, who traveled by sea, directly southward, or from Sichuan along the Xi River.[7] In 111 BC, General Lu Bode and General Yang Pu advanced towards Panyu (present-day Guangzhou).[5] This resulted in the surrender of Nanyue to the Han empire later that year.[5]

After the conquest of Nanyue in 111 BC, the Han empire established nine new commanderies to administer the former Nanyue territories.[5] Han control proceeded to expand further southwestward by military means after the conquest.[8] Following the conquest, the Han empire gradually extended its overseas trade with the various countries in Southeast Asia and around the Indian Ocean.[9]