Halland County (Swedish: Hallands län) is a county (län) on the western coast of Sweden. It corresponds roughly to the cultural and historical province of Halland. The capital is Halmstad.

It borders the counties of Västra Götaland, Jönköping, Kronoberg, Skåne and the sea of the Kattegat.

The County of Halland inherited its coat of arms from the province of Halland. When it is shown with a royal crown it represents the County Administrative Board.

Counties mainly serve administrative purposes in Sweden. The culture and history of the area is to be found in its provincial counterpart Halland. The county was designed with virtually the same boundaries as the province. The major exception is a part of Hylte Municipality, which belongs to the province of Småland.

The main aim of the County Administrative Board is to fulfil the goals set in national politics by the Riksdag and the Government, to coordinate the interests and promote the development of the county, to establish regional goals and safeguard the due process of law in the handling of each case. The County Administrative Board is a Government Agency headed by a governor. See List of Halland Governors.

Among the main responsibilities of the Halland County Council (Landstinget Halland) are public health care issues. 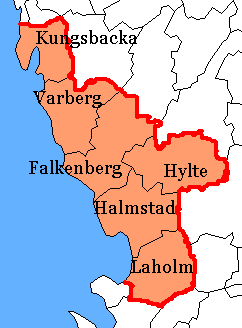 Sweden's counties are entities for Sweden's municipalities, responsible for such things as child care, education, street planning, etc. Municipalities in Halland County are, from north to south, with the numbers of inhabitants::

Localities in order of size

The five most populous localities of Halland County in 2010:[2]

There is an investigation committee appointed by the government, who investigating the best future division and responsibitites of the counties of Sweden, called Ansvarskommittén. They are working long-term, but their preliminary reports suggest a large reduction of the number of counties in Sweden. Halland county is there proposed to be divided in two halves, both to be combined with neighbouring large counties.