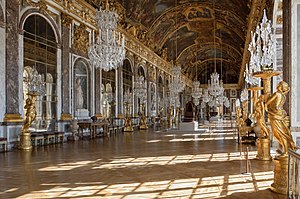 Hall of Mirrors, Palace of Versailles

The Hall of Mirrors (French: Grande Galerie, Galerie des Glaces, Galerie de Louis XIV) is a grand Baroque style gallery and one of the most emblematic rooms in the royal Palace of Versailles near Paris, France. The grandiose ensemble of the Hall and its adjoining salons was intended to illustrate the power of the absolutist monarch Louis XIV. Located on the ground floor of the palace's central body, it faces west towards the Palace Gardens for a complete perspective. The Hall of Mirrors has been the scene of events of great historic significance on a number of occasions.[1][2] 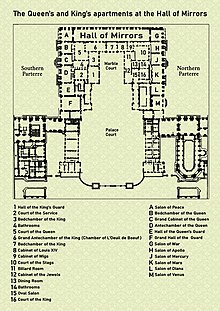 The royal apartments adjacent to the Hall of Mirrors

In 1623 King Louis XIII ordered the construction of a modest two-story hunting lodge at Versailles, which he soon enlarged to a château from 1631 to 1634. His son Louis XIV declared the site his future permanent residence in 1661 and ordered the transformation into an extensive residence in several stages and on a grandiose scale. The palace was to provide ideal settings for rest and retreat but it also had to attain a new quality of representation as the future seat of Europe's greatest absolutist royal court and government of supreme authority, residence of choice for the aristocratic society and arena for elaborate state festivals and ceremonies, Europe's centre of culture, art and entertainment. During the early expansion phase Louis Le Vau added the Forecourt (1662) and the “Le Vau Envelope” (1668 to 1670), encased the old château and added two new wings in the north and south. The new wings towered over the original western building by the garden. The space in between was a terrace supported by arcades. The buildings of the “Le Vau Envelope” included the king's apartments in the north and the queen's apartments in the south.[3]

The Hall of Mirrors was built during the third building stage between 1678 and 1684 and was to replace the large terrace, that opened towards the garden. The terrace was originally situated directly outside of the King's and the Queen’s apartments. The terrace was considered to be a rather misplaced architectural element and exposed to the elements, reducing its utility. Eventually it was decided to demolish it and architect Jules Hardouin-Mansart was tasked with the design development and the construction of the Mirror Hall Gallery and artist Charles Le Brun received the honor to create the interior decorative apparatus.[4][5]

The garden facade of the Corps de logis was built in a straight front and essentially received its current appearance. The Hall of Mirrors is flanked at the far ends by the Salon of War (Salon de la guerre) in the north and the Salon of Peace (Salon de la paix) in the south, respectively. The Mirror Gallery connects to the two Salons, which were assigned to and incorporated into the king's apartments in the north and the queen's apartments in the south. Both Salons are accessible via the Mirror Gallery through wide opening passageways. The Hall and the two Salons were identically furnished and decorated and form a stylistic and functional unit. The exterior walls of the Salons date from the time of Le Vau's encasings of the old château and were given their current appearance after the installation of the Mirror Hall by Hardouin-Mansart.[6][7]

The Hall of Mirrors is besides the Palace Chapel, completed in the early 18th century, the Court Opera and the Galerie des Batailles one of the largest rooms in the palace. It is 73 m (240 ft) long and 10.50 m (34.4 ft) deep.[8] With its height of 12.30 m (40.4 ft) it reaches to the Attic floor of the Corps de Logis. The square windows on the upper floor, which can be seen from the outside, only serve aesthetic purposes, as there are no rooms inside. The installation of any kind of fireplaces was never contemplated as the Hall of Mirrors was too large to effectively be heated.[9][10] 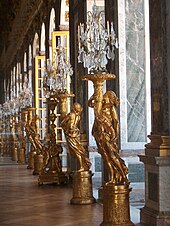 The Mirror Hall's 17 windows open in the direction of the park. On the opposite inside wall of the Hall are 17 equally large mirrors, that are composed of more than 350 individual mirror surfaces. On the one hand, the mirrors had an aesthetic function, as the mirror image of the garden depicted the exterior of the castle into the interior of the building and reflected the candlelight in the evening. On the other hand, the mirrors also conveyed the king's wealth and the efficiency of the French economy in a subtle way. Mirror glass was an expensive luxury product in the 17th century and could only be produced with great effort. The manufacture of the mirror surfaces was the first major order for the Manufacture royale de glaces de miroirs, a glass factory founded by Jean-Baptiste Colbert, the later Compagnie de Saint-Gobain, with which the Venetian monopoly on the manufacture of mirrors in Europe was broken.[11][12]

Much of the original solid silver furniture of the Hall of Mirrors, famous at the time, was soon lost, particularly the silver Guéridons (tables), which were melted down and coined by order of Louis XIV in 1689 to finance the War of the League of Augsburg. Today's furniture was manufactured during the 19th century after most of the original furnishings were lost during the French Revolution.

The Hall's grandeur is besides the mirrors, best perceived through the majesty of its vault. Nine large and numerous smaller ceiling paintings are dedicated to the idolization of the Sun King and praise the successes of the first 20 years of his reign. Charles Le Brun, "the greatest French artist of all time" according to king Louis XIV, was, unsurprisingly, the artist of choice for the ceiling paintings. The most prestigious scenes were painted on strengthened canvas and glued to the vault by Le Brun himself, aged 60 at the start of the work. The painting The King Governs Himself highlights the claim to absolute power. Further topics include the Peace of Nijmegen and the Cconquest of the Franche-Comté. A contemporary anecdote: the mirror surface furnishings of such large areas as the seventeen arches has been the idea of architect Jules Hardouin-Mansart, who wanted to prevent Le Brun from having even more opportunities to impress Louis with his work.[13][14]

The gilded bronze capitals of the Rouge de Rance marble pilasters are decorated with the Fleur-de-lis and Gallic roosters. The gilded bronze trophies, that adorn the green marble Pier glasses, were manufactured by goldsmith Pierre Ladoyreau.

The marble and porphyry busts of eight Roman emperors are accompanied by sculptures of Greek and Roman deities and Muses, such as Bacchus, Venus (Venus of Arles), Modesty, Hermes, Urania, Nemesis and Diana (Diana of Versailles). The latter, moved to the Louvre in 1798, was replaced by a Diana sculpted by René Frémin for the gardens of the Château de Marly until the restoration of the Hall of Mirrors during 2004 to 2007, which in turn was replaced by a copy of the original Diana.[15][16] 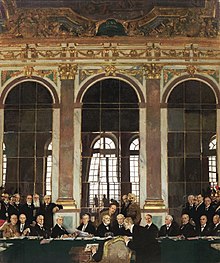 During the 17th century, the Hall's main purpose was to serve as a kind of covered promenade for Louis XIV's visit to the chapel. He entered the gallery at least once a day and from 1701, the king's bedroom lay behind the middle wall of the gallery. Courtiers assembled to meet the king and members of the royal family and might make a particular request by intoning: "Sire, Marly?". This was the manner in which nobles were able to obtain a much sought-after invitation to one of the king's house parties at Marly-le-Roi, a villa Louis XIV had built north of Versailles on the route to Saint-Germain-en-Laye.

Its central location and size predestined the Hall of Mirrors as a place for court festivities such as the wedding of the Duke of Burgundy with Marie Adélaïde of Savoy, the wedding of Louis Ferdinand and Maria Theresa of Spain in 1645 and the wedding of Louis XVI and Marie Antoinette in 1770. In the successive reigns of Louis XV and Louis XVI, the Hall of Mirrors continued to serve for family and court functions. Embassies, births, and marriages were held in this room. The most celebrated event of the 18th century on 25 February 1745 was the celebrated Yew Tree Ball. It was during this costume ball that Louis XV, who was dressed as a yew tree, met Jeanne-Antoinette Poisson d'Étiolles, who was costumed as Diana, goddess of the hunt. Jeanne-Antoinette, who became Louis XV's mistress, is better known to history as the Marquise de Pompadour.

Foreign audiences were granted, including that of the Doge of Genoa in 1685 and the embassy of King Mahmud I of Turkey in 1742. However, of all the events that transpired in this room during the reign of Louis XIV, the Siamese Embassy of 1685 to 1686 has been cited as the most opulent. At this time, the Hall of Mirrors and the grand appartements were still decorated with the original silver furniture. In its heyday, over 3,000 candles were used to light the Hall of Mirrors. In February 1715, Louis XIV held his last embassy in the Hall when he received Mehemet Reza Bey, ambassador of the Shah of Persia.[17][18]

On 18 January 1871 during the siege of Paris at the conclusion of the Franco-Prussian War, the Prussian king, William I, was, led by Otto von Bismarck, declared German emperor — thus establishing the German Empire — in the Hall of Mirrors by the assembled German princes and lords. The choice fell among other things like Versailles being the headquarters of the united German armies, on the Hall of Mirrors because its ceiling paintings glorified the conquest of German territories by France. The French nation regarded this ceremony as deeply humiliating. The event greatly contributed to the further accretion of the Franco-German enmity.[19] A few decades later French Prime Minister Clemenceau consciously chose the Hall of Mirrors as the site to sign the Treaty of Versailles on 28 June 1919, that officially ended World War I, to dismantle the German Empire in the room where it had been proclaimed.[20][21][22]

The Hall of Mirrors remains reserved for official ceremonies of the French Republic. Notable events during the 20th century were the reception of US-President John Fitzgerald Kennedy and his wife by Charles De Gaulle, the reception of the Shah of Iran Mohammad Reza Pahlavi by Valéry Giscard d'Estaing in 1974 or the invitation of representatives of the Group of Seven summit by President François Mitterrand from June 4 to 6, 1982.

Historical depictions of the Hall of Mirrors