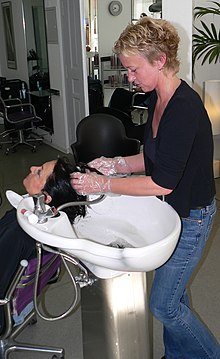 A hairdresser is a person whose occupation is to cut or style hair in order to change or maintain a person's image. This is achieved using a combination of hair coloring, haircutting, and hair texturing techniques. Most hairdressers are professionally licensed as either a hairdresser, a barber or a cosmetologist.[where?]

Hairdressing as an occupation dates back thousands of years. Ancient art drawings and paintings have been discovered depicting people working on another person's hair. Greek writers Aristophanes and Homer both mention hairdressing in their writings. In Africa, it was believed in some cultures that a person's spirit occupied his or her hair, giving hairdressers high status within these communities. The status of hairdressing encouraged many to develop their skills, and close relationships were built between hairdressers and their clients. Hours would be spent washing, combing, oiling, styling and ornamenting their hair. Men would work specifically on men, and women on other women. Before a master hairdresser died, they would give their combs and tools to a chosen successor during a special ceremony.[1]

In ancient Egypt, hairdressers had specially decorated cases to hold their tools, including lotions, scissors and styling materials. Barbers also worked as hairdressers, and wealthy men often had personal barbers within their home. With the standard of wig wearing within the culture, wigmakers were also trained as hairdressers. In ancient Rome and Greece household slaves and servants took on the role of hairdressers, including dyeing and shaving. Men who did not have their own private hair or shaving services would visit the local barbershop. Women had their hair maintained and groomed at their homes. Historical documentation is lacking regarding hairstylists from the 5th century until the 14th century. Hair care service grew in demand after a papal decree in 1092 demanded that all Roman Catholic clergymen remove their facial hair.[1] 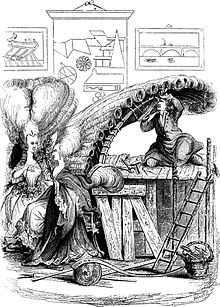 A caricature of a French hairdresser at the Académie de Coiffure, working on a large hairstyle, fashionable of the time, in the 18th century.

The first appearance of the word "hairdresser" is in 17th century Europe, and hairdressing was considered a profession. Hair fashion of the period suggested that wealthy women wear large, complex and heavily adorned hairstyles, which would be maintained by their personal maids and other people, who would spend hours dressing the woman's hair. A wealthy man's hair would often be maintained by a valet. It was in France where men began styling women's hair for the first time, and many of the notable hairdressers of the time were men, a trend that would continue into contemporary times. The first famous male hairdresser was Champagne, who was born in Southern France. Upon moving to Paris, he opened his own hair salon and dressed the hair of wealthy Parisian women until his death in 1658.[1]

Women's hair grew taller in style during the 17th century, popularized by the hairdresser Madame Martin. The hairstyle, "the tower," was the trend with wealthy English and American women, who relied on hairdressers to style their hair as tall as possible. Tall piles of curls were pomaded, powdered and decorated with ribbons, flowers, lace, feathers and jewelry. The profession of hairdressing was launched as a genuine profession when Legros de Rumigny was declared the first official hairdresser of the French court. In 1765 de Rumigny published his book Art de la Coiffure des Dames, which discussed hairdressing and included pictures of hairstyles designed by him. The book was a best seller amongst Frenchwomen, and four years later de Rumigny opened a school for hairdressers: Academie de Coiffure. At the school he taught men and women to cut hair and create his special hair designs.[1]

By 1777, approximately 1,200 hairdressers were working in Paris. During this time, barbers formed unions, and demanded that hairdressers do the same. Wigmakers also demanded that hairdressers cease taking away from their trade, and hairdressers responded that their roles were not the same, hairdressing was a service, and wigmakers made and sold a product. de Rumigny died in 1770 and other hairdressers gained in popularity, specifically three Frenchmen: Frederic, Larseueur, and Léonard. Leonard and Larseueur were the stylists for Marie Antoinette. Leonard was her favorite, and developed many hairstyles that became fashion trends within wealthy Parisian circles, including the loge d'opera, which towered five feet over the wearer's head.[1][2] During the French Revolution he escaped the country hours before he was to be arrested, alongside the king, queen, and other clients. He emigrated to Russia, where he worked as the premier hairdresser for Russian nobility.[1] 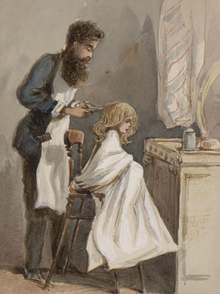 Play media
Rotating sign outside a hairdresser in Ystad 2019.

Parisian hairdressers continued to develop influential styles during the early 19th century. Wealthy French women would have their favorite hairdressers style their hair from within their own homes, a trend seen in wealthy international communities. Hairdressing was primarily a service affordable only to those wealthy enough to hire professionals or to pay for servants to care for their hair. In the United States, Marie Laveau was one of the most famous hairdressers of the period. Laveau, located in New Orleans, began working as a hairdresser in the early 1820s, maintaining the hair of wealthy women of the city. She was a voodoo practitioner, called the "Voodoo Queen of New Orleans," and she used her connections to wealthy women to support her religious practice. She provided "help" to women who needed it for money, gifts and other favors.[1]

French hairdresser Marcel Grateau developed the "Marcel wave" in the late part of the century. His wave required the use of a special hot hair iron and needed to be done by an experienced hairdresser. Fashionable women asked to have their hair "marceled." During this period, hairdressers began opening salons in cities and towns, led by Martha Matilda Harper, who developed one of the first retail chains of hair salons, the Harper Method.[1] 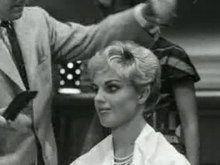 Play media
A Dutch hairstylist gives a woman the "Coup Sixty-One" hairstyle. After completing the look, he then shows that his styling can withstand the elements, with a watering can demonstration.

Beauty salons became popularized during the 20th century, alongside men's barbershops. These spaces served as social spaces, allowing women to socialize while having their hair done and other services such as facials. Wealthy women still had hairdressers visit their home, but, the majority of women visited salons for services, including high-end salons such as Elizabeth Arden's Red Door Salon.[1]

Major advancements in hairdressing tools took place during this period. Electricity led to the development of permanent wave machines and hair dryers. These tools allowed hairdressers to promote visits to their salons, over limited service in-home visits. New coloring processes were developed, including those by Eugene Schueller in Paris, which allowed hairdressers to perform complicated styling techniques. After World War I, the bob cut and the shingle bob became popular, alongside other short haircuts. In the 1930s complicated styles came back into fashion, alongside the return of the Marcel wave. Hairdressing was one of the few acceptable professions during this time for women, alongside teaching, nursing and clerical work.[1]

Occupationally, hairdressing is expected to grow faster than the average for all other occupations, at 20%. A state license is required for hairdressers to practice, with qualifications varying from state to state. Generally a person interested in hairdressing must have a high school diploma or GED, be at least 16 years of age, and have graduated from a state-licensed barber or cosmetology school. Full-time programs often last 9 months or more, leading to an associate degree. After students graduate from a program, they take a state licensing exam, which often consists of a written test, and a practical test of styling or an oral exam. Hairdressers must pay for licenses, and occasionally licenses must be renewed. Some states allow hairdressers to work without obtaining a new license, while others require a new license. About 44% of hairdressers are self-employed, often putting in 40-hour work weeks, and even longer among the self-employed. In 2008, 29% of hairstylists worked part-time, and 14% had variable schedules. As of 2008, people working as hairdressers totaled about 630,700, with a projected increase to 757,700 by 2018.[3]