Haileybury is an independent school near Hertford in England. It is a member of the Rugby Group and though originally a major boys' public school in the Victorian Era, it is now co-educational, enrolling pupils at 11+, 13+ and 16+ stages of education. Over 880 pupils attend Haileybury, of whom more than 550 board. 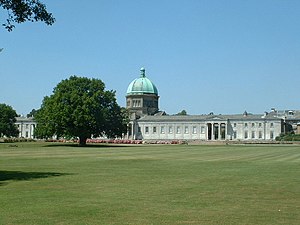 The previous institution at Haileybury was the East India College (EIC), the training establishment founded in 1806 for administrators of the Honourable East India Company. The EIC was initially based at Hertford Castle, but substantial grounds in Hertford Heath were acquired for future development. William Wilkins, the architect of Downing College, Cambridge, and the National Gallery in London, was appointed principal architect. The buildings comprise four ranges which enclose an area known as Quad, the second-largest academic quadrangle in Britain after Christ Church, Oxford.[1] In the wake of the Indian Rebellion of 1857, the East India Company was nationalised, and its College closed in January 1858. In 1862, a public school opened on the site that retained many connections with the EIC, with Royal charter being received in 1864. Many of the houses were named after Old Boys or Principals of the EIC, and Haileybury's primary purpose during the second half of the 19th century was to provide soldiers and administrators for the British Empire, in particular, British India.

The Chapel dome was added by Sir Arthur Blomfield and completed in 1877. Further Victorian additions were designed by Sir John William Simpson. The Memorial Hall, the school's dining hall, was opened by the future King George VI and Queen Elizabeth, and acts as a monument to former pupils who gave their lives in the First World War. During the past 40  years, its use has been extended to commemorate deaths of OHs in all military conflicts.

The dining hall contains one of the largest unsupported domes in Europe. Until the 1990s, the entire school of over 700 pupils dined there at a single sitting, all brought to silence for grace by the beating of a massive brass howitzer shell, captured from a German gun emplacement during the First World War and then converted into a gong. A gilded plaster boss in the centre of this dome represents an oak tree being struck by lightning. Known as Little Lightning Oak, this decoration represents the massive oak tree that stands on the lawn in front of Terrace, the promenade visible in this photograph. This tree was struck by lightning and all but destroyed, re-sprouted.

As well as the wooden tablets surrounding the exterior of the dining hall, there are other memorials to the school's 1,436 war casualties. In memory of Haileyburians who died in the Boer War, a war memorial obelisk, of portland stone with bronze decorations, was erected on the main axis of the school's entrance front in 1903. It is known in the school as Obelisk and was designed by former pupil, Sir Reginald Blomfield. The memorial on Terrace, originally built to commemorate those lost in the First World War, was also designed by Sir Reginald; it was unveiled by General Sir Alexander Godley KCB KCMG on 7 July 1923. Known as the Cross of Sacrifice, this simple stone structure serves as a prototype for war memorials found in every Commonwealth War Cemetery and other war memorials around the world.

In the late 20th century, reforming headmaster David Jewell took charge of Haileybury, bringing it out of its post-Cold War austerity. Stuart Westley, Master of Haileybury until July 2009, was responsible for making the school fully co-educational.[3]

Haileybury serves as a co-educational school for 11- to 18-year-olds. Girls' houses comprise Colvin, Melvill, Allenby, Alban's, and Hailey. The seven boys' houses consist of Edmonstone, Lawrence, Bartle Frere, Kipling, Batten, Thomason, and Trevelyan. There is also a boarding house for the Lower School (Years 7 and 8) called Highfield. The Ayckbourn Theatre functions as a modern auditorium with a fully equipped stage and back-stage. In 1997, the college chapel organ was re-built by the German organ builder Klais.

Haileybury hosts its own Model United Nations Conference conference every year,[4] for nearly 900 pupils, making it largest MUN conference in the UK.[5] The conference is typically held the weekend before the Easter holiday.

In 2006/2007, Haileybury advised on the building of a Haileybury in Almaty, Kazakhstan where all English GCSEs are taught and the curriculum is taught similarly under the guidance of Haileybury. The school, opened in September 2008, is known as Haileybury Almaty.

The pupils are made up mostly of Kazakhstan citizens. They are all required to speak English. The academic year 2010–11 saw the first batch of pupils pass their IGCSE exams. Since August 2011, Haileybury Almaty has opened a 6th form. In 2016, 11 pupils graduated from the 6th form with one getting admission to Trinity College, Cambridge University, and 6 securing places in University College, London (UCL). A second school, in the Kazakhstan capital Astana, was opened in September 2011.[6]

Following the foundation of Haileybury Almaty, a sister school was opened in 2008 in Astana, the capital city of Kazakhstan. Haileybury Astana provides education for boys and girls from the two to eighteen years of age and introduced the IB and joined CIS and NEASC under the leadership of Headmaster Jonathan Ullmer MBE. It is an IB World School and started running the International Primary Curriculum (IPC) at the same time. Jonathan Ullmer led the school to its first successful COBIS inspection in 2018 where the school was rated as having top international practice in 17 out of 19 areas.

In September 2015, Turnford School in Turnford, Hertfordshire converted to academy status and was renamed Haileybury Turnford. Haileybury acts as the main sponsor of the school, and this is the first state-funded school to have links with Haileybury.

Past pupils are known as Old Haileyburians.

For details of notable alumni, see List of people educated at Haileybury and Imperial Service College.