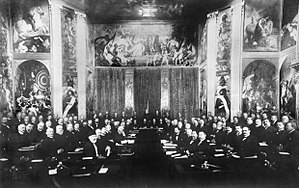 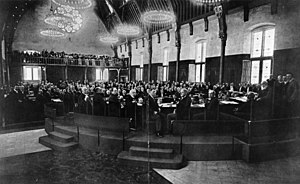 The Second Hague Conference in 1907

The Hague Conventions of 1899 and 1907 were the first multilateral treaties that addressed the conduct of warfare and were largely based on the Lieber Code, which was signed and issued by US President Abraham Lincoln to the Union Forces of the United States on 24 April 1863, during the American Civil War. The Lieber Code was the first official comprehensive codified law that set out regulations for behavior in times of martial law; protection of civilians and civilian property and punishment of transgression; deserters, prisoners of war, hostages, and pillaging; partisans; spies; truces and prisoner exchange; parole of former rebel troops; the conditions of any armistice, and respect for human life; assassination and murder of soldiers or citizens in hostile territory; and the status of individuals engaged in a state of civil war against the government.

The First Hague Conference came from a proposal on 24 August 1898 by Russian Tsar Nicholas II.[7] Nicholas and Count Mikhail Nikolayevich Muravyov, his foreign minister, were instrumental in initiating the conference. The conference opened on 18 May 1899, the Tsar's birthday. The treaties, declarations, and final act of the conference were signed on 29 July of that year, and they entered into force on 4 September 1900. What is referred to as the Hague Convention of 1899 consisted of three main treaties and three additional declarations:

Commemorative medal of the 1907 convention

Parties to Convention number IV: Convention respecting the laws and customs of war on land

The Second Hague Conference, in 1907, resulted in conventions containing only few major advancements from the 1899 Convention. However, the meeting of major powers did prefigure later 20th-century attempts at international cooperation.

The second conference was called at the suggestion of U.S. President Theodore Roosevelt in 1904, but it was postponed because of the war between Russia and Japan. The Second Peace Conference was held from 15 June to 18 October 1907. The intent of the conference was to expand upon the 1899 Hague Convention by modifying some parts and adding new topics; in particular, the 1907 conference had an increased focus on naval warfare. The British attempted to secure the limitation of armaments, but these efforts were defeated by the other powers, led by Germany, which feared a British attempt to stop the growth of the German fleet. As Britain had the world's largest navy, limits on naval expansion would preserve that dominant position. Germany also rejected proposals for compulsory arbitration. However, the conference did enlarge the machinery for voluntary arbitration and established conventions regulating the collection of debts, rules of war, and the rights and obligations of neutrals.

The Brazilian delegation was led by Ruy Barbosa, whose contributions are seen today by some analysts as essential for the defense of the principle of legal equality of nations.[31] The British delegation included Sir Edward Fry, Sir Ernest Satow, the 11th Lord Reay (Donald James Mackay) and Sir Henry Howard as delegates, and Eyre Crowe as a technical delegate.[32] The Russian delegation was led by Friedrich Martens. The Uruguayan delegation was led by José Batlle y Ordóñez, a defender of the idea of compulsory arbitration.[citation needed]With Louis Renault and Léon Bourgeois, Paul Henri d'Estournelles de Constant was a member of the French delegation for both the 1899 and 1907 delegations. He later won the Nobel Peace Prize in 1909 for his efforts. The U.S. representative, with the rank of ambassador, was former American Bar Association president U. M. Rose.

Though not negotiated in The Hague, the Geneva Protocol to the Hague Conventions is considered an addition to the Conventions. Signed on 17 June 1925 and entering into force on 8 February 1928, its single article permanently bans the use of all forms of chemical and biological warfare. The protocol grew out of the increasing public outcry against chemical warfare following the use of mustard gas and similar agents in World War I, and fears that chemical and biological warfare could lead to horrific consequences in any future war. The protocol has since been augmented by the Biological Weapons Convention (1972) and the Chemical Weapons Convention (1993).

Many of the rules laid down at the Hague Conventions were violated in World War I. The German invasion of Belgium, for instance, was a violation of Convention (III) of 1907, which states that hostilities must not commence without explicit warning.[33] Poison gas was introduced and used by all major belligerents throughout the war, in violation of the Declaration (IV, 2) of 1899 and Convention (IV) of 1907, which explicitly forbade the use of "poison or poisoned weapons".[34][page needed]

After World War II, the judges of the military tribunal of the Trial of German Major War Criminals at Nuremberg Trials found that by 1939, the rules laid down in the 1907 Hague Convention were recognised by all civilised nations and were regarded as declaratory of the laws and customs of war. Under this post-war decision, a country did not have to have ratified the 1907 Hague Convention in order to be bound by them.[36]

Although their contents have largely been superseded by other treaties,[citation needed] the Hague Conventions of 1899 and 1907 continue to stand as symbols of the need for restrictions on war and the desirability of avoiding it altogether. Since 2000, Convention (I) of 1907 on the Pacific Settlement of International Disputes has been ratified by 20 additional states.[16]