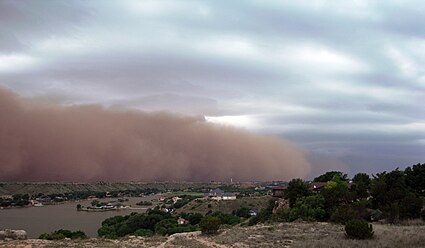 A haboob moves across the Llano Estacado toward Yellow House Canyon, near the residential community of Ransom Canyon, Texas (18 June 2009)

When this downdraft of cold air, or downburst, reaches the ground, it blows dry, loose silt and clay (collectively, dust) up from the desert, creating a wall of sediment that precedes the storm cloud. This wall of dust can be up to 100 km (62 mi) wide and several kilometers in elevation. At their strongest, haboob winds often travel at 35–100 km/h (22–62 mph), and they may approach with little or no warning. Often rain does not appear at ground level as it evaporates in the hot, dry air (a phenomenon known as virga). The evaporation cools the rushing air even further and accelerates it. Occasionally, when the rain does persist, it can contain a considerable quantity of dust. Severe cases are called mud storms. Eye and respiratory system protection is advisable for anyone who must be outside during a haboob. Moving to shelter is highly advised during a strong event.

Haboobs have been observed in the Sahara, Sahel (typically Sudan, where they were named and described), as well as across the Arabian Peninsula, throughout Kuwait, and in the most arid regions of Iraq.[4] Haboob winds in the Arabian Peninsula, Iraq, Kuwait are frequently created by the collapse of a thunderstorm.

African haboobs result from the northward summer shift of the inter-tropical front into North Africa, bringing moisture from the Gulf of Guinea.

Haboobs in Australia may be frequently associated with cold fronts. The deserts of Central Australia, especially near Alice Springs, are particularly prone to haboobs, with sand and debris reaching several kilometers into the sky and leaving up to 30 centimetres (1 ft) of sand in the haboob's path.

As with haboobs in the Middle East, haboob occurrences in North America are often created by the collapse of a thunderstorm. This is a local or mesoscale event, and at times of extreme drought they can originate in agricultural regions. Some of the most famous dust storms of the Dust Bowl and similar conditions later were in fact synoptic scale events typically generated by a strong cold frontal passage, with 14 April 1935, 9–11 May 1934, 19 February 1954, and 11 November 1911 being particularly vivid examples.

The arid and semiarid regions of North America—in fact, any dry region—may experience haboobs. In North America, the most common terms for these events are either dust storm or sandstorm. In the U.S., they frequently occur in the deserts of Arizona, including around the cities of Yuma and Phoenix;[5][6] in New Mexico, including Albuquerque; in eastern California, and in Texas.[7] They also sometimes occur in the Columbia Basin, of Eastern Washington, almost always leading to an impact with the city of Spokane. If the storms are strong enough, they can reach as far east as Post Falls and Moscow, in North Idaho.

Global dust storms on Mars have been compared to haboobs on Earth.[8]

Dust storms of Titan observed in 2009 and 2010 have been compared to haboobs.[9][10] However, the convective storm clouds are composed of liquid methane droplets, and the dust is likely composed of organic tholins.[10]