Habibullah was the eldest son of Emir Abdur Rahman, born in Samarkand, Uzbekistan in 1871. He had a younger brother Nasrullah, born in 1874.[1] 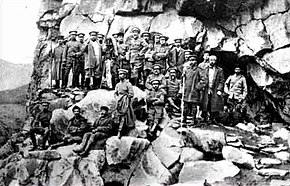 Habibullah was a relatively reform-minded ruler who attempted to modernize his country. During his reign he worked to bring modern medicine and other technology to Afghanistan. Many people who were forced into exile by his father were returned to Afghanistan by a general amnesty decreed by Habibullah.[3] In 1903, Habibullah founded the Habibia school as well as a military academy. He also worked to put in place progressive reforms in his country. He instituted various legal reforms and repealed many of the harshest criminal penalties. But one of his chief advisers Abdul Lateef was sentenced to death in 1903 for apostasy. He was stoned to death in Kabul. Other reforms included the dismantling of the repressive internal intelligence organization that had been put in place by his father.

In May 1912, Habibullah faced the only crisis in his career when a rebellion erupted in Khost led by Jehandad Khan, a rival claimant to the Afghan throne, known as the Khost rebellion.[4] This rebellion ended in August that same year, when the rebels were given concessions by the Afghan government.[5]

Habibullah maintained the country's neutrality in World War I, despite strenuous efforts by the Sultan of the Ottoman Empire and a German military mission (Niedermayer–Hentig Expedition) to enlist Afghanistan on its side. He also greatly reduced tensions with British India, signing a treaty of friendship in 1905 and paying an official state visit in 1907. While in India, he was initiated into Freemasonry, at Lodge Concordia, No. 3102.[6][7]

Habibullah was assassinated while on a hunting trip at Kalagosh, Laghman Province on February 20, 1919.[8] His assassination was carried out in his sleep by Shuja ud-Daula, one of the pages who slept in his tent, on orders from his younger son, Amanullah Khan. Habibullah's brother Nasrullah Khan briefly succeeded him as Emir and held power for a week between February 21 and February 28, 1919, before being ousted and imprisoned by Amanullah Khan, Habibullah's third son.[9] This occurred a few months before the Third Anglo-Afghan War.