Leif Höegh & Co is an international shipping company, founded in 1927 by Norwegian Leif Høegh (1896-1974). Since 2006 the company has been structured as two separate entities, Höegh Autoliners and Höegh LNG, with Leif Höegh & Co acting as a common holding company.

Höegh LNG is active in the liquefied natural gas industry including LNG carriers.[1] As of January 2015, it is 44.6 owned by Leif Höegh. The largest investors are Allianz, Fairview Capital and Nordea. The Baupost Group announced that it controlled 5.26% of shares for its clients.[2]

In 1970 a joint venture in between Höegh and Ugland Auto Liners (HUAL) was formed to develop a new leading RORO operator. Then in March 2000 Leif Höegh & Co acquired the remaining 50% of HUAL, renaming the company Höegh Autoliners, as known today.

In 2008 A.P. Moller became a minority shareholder in Höegh Autoliners, holding 37,5 per cent of shares.

As part of its relationship with Maersk, Höegh Autoliners took over twelve Maersk ships in 2008 (plus the contract of six to be built).[3]

Since January 2014, its Europe/USA routes have included Valencia to Baltimore, Jacksonville, New York and Galveston.[4][5]

In May 2014 it was announced that nine Höegh Autoliners PCTC vessels would be managed by Wallem which would deliver technical and crew management from Wallem's Singapore base.[8]

In January 2015 the MV Höegh Osaka was en route from Southampton to Bremerhaven when accidentally grounded, requiring salvage.[9]

On 25 February 2019, MV Höegh London reported a Crew member casualty while sailing in the Mediterranean Sea from Tanger-Med to Gemlik.[10] The vessel faced an extremely serious storm, that caused severe rolling and consequent unexpected movements of her cargo on the decks. Several vehicles were damaged, and also the bulkhead structure was cracked in several points, with seawater entering in her holds. While the Crew was verifying the seriousness of the damages and attempting the cargo re-lashing, a Chinese Crew member was hit by a heavy machinery, reporting life threatening injuries and soon after died on board.[11] The ship requested emergency berthing at Pozzallo port to disembark the seafarer, and undertake an inspection of the ship’s seaworthiness.[12]

On 4 June 2020, a serious fire started on mv Höegh Xiamen while alongside Jacksonville Blount Island port, and lasted for 3 full days, before having being successfully extinguished by Jacksonville fire brigades.[13]The vessel, before been finally declared a total loss, was under Grimaldi Group time chartering and operation, for discharging and loading cars and used high and heavy machineries, on a regular monthly service in between Europe and US.[14] 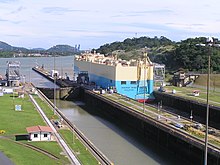 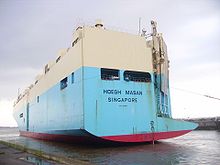