Selenite (mineral) Anhydrite White Sands National Park
Mineral
This article is about the mineral. For other uses, see Gypsum (disambiguation).

Gypsum is a soft sulfate mineral composed of calcium sulfate dihydrate, with the chemical formula CaSO4·2H2O.[3] It is widely mined and is used as a fertilizer and as the main constituent in many forms of plaster, blackboard/sidewalk chalk, and drywall. A massive fine-grained white or lightly tinted variety of gypsum, called alabaster, has been used for sculpture by many cultures including Ancient Egypt, Mesopotamia, Ancient Rome, the Byzantine Empire, and the Nottingham alabasters of Medieval England. Gypsum also crystallizes as translucent crystals of selenite. It also forms as an evaporite mineral and as a hydration product of anhydrite.

The Mohs scale of mineral hardness defines hardness value 2 as gypsum based on scratch hardness comparison.

The word gypsum is derived from the Greek word γύψος (gypsos), "plaster".[4] Because the quarries of the Montmartre district of Paris have long furnished burnt gypsum (calcined gypsum) used for various purposes, this dehydrated gypsum became known as plaster of Paris. Upon addition of water, after a few tens of minutes plaster of Paris becomes regular gypsum (dihydrate) again, causing the material to harden or "set" in ways that are useful for casting and construction.

Gypsum was known in Old English as spærstān, "spear stone", referring to its crystalline projections. (Thus, the word spar in mineralogy is by way of comparison to gypsum, referring to any non-ore mineral or crystal that forms in spearlike projections). In the mid-18th century, the German clergyman and agriculturalist Johann Friderich Mayer investigated and publicized gypsum's use as a fertilizer.[5] Gypsum may act as a source of sulfur for plant growth, and in the early 19th century, it was regarded as an almost miraculous fertilizer. American farmers were so anxious to acquire it that a lively smuggling trade with Nova Scotia evolved, resulting in the so-called "Plaster War" of 1820.[6] In the 19th century, it was also known as lime sulfate or sulfate of lime. 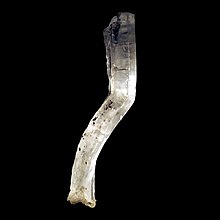 Gypsum crystals are soft enough to bend under pressure of the hand. Sample on display at Musée cantonal de géologie de Lausanne.

Gypsum is moderately water-soluble (~2.0–2.5 g/l at 25 °C)[7] and, in contrast to most other salts, it exhibits retrograde solubility, becoming less soluble at higher temperatures. When gypsum is heated in air it loses water and converts first to calcium sulfate hemihydrate, (bassanite, often simply called "plaster") and, if heated further, to anhydrous calcium sulfate (anhydrite). As for anhydrite, its solubility in saline solutions and in brines is also strongly dependent on NaCl (common table salt) concentration.[7]

Gypsum occurs in nature as flattened and often twinned crystals, and transparent, cleavable masses called selenite. Selenite contains no significant selenium; rather, both substances were named for the ancient Greek word for the Moon.

Selenite may also occur in a silky, fibrous form, in which case it is commonly called "satin spar". Finally, it may also be granular or quite compact. In hand-sized samples, it can be anywhere from transparent to opaque. A very fine-grained white or lightly tinted variety of gypsum, called alabaster, is prized for ornamental work of various sorts. In arid areas, gypsum can occur in a flower-like form, typically opaque, with embedded sand grains called desert rose. It also forms some of the largest crystals found in nature, up to 12 m (39 ft) long, in the form of selenite.[9]

Gypsum is a common mineral, with thick and extensive evaporite beds in association with sedimentary rocks. Deposits are known to occur in strata from as far back as the Archaean eon.[10] Gypsum is deposited from lake and sea water, as well as in hot springs, from volcanic vapors, and sulfate solutions in veins. Hydrothermal anhydrite in veins is commonly hydrated to gypsum by groundwater in near-surface exposures. It is often associated with the minerals halite and sulfur. Gypsum is the most common sulfate mineral.[11] Pure gypsum is white, but other substances found as impurities may give a wide range of colors to local deposits.

Because gypsum dissolves over time in water, gypsum is rarely found in the form of sand. However, the unique conditions of the White Sands National Park in the US state of New Mexico have created a 710 km2 (270 sq mi) expanse of white gypsum sand, enough to supply the US construction industry with drywall for 1,000 years.[12] Commercial exploitation of the area, strongly opposed by area residents, was permanently prevented in 1933 when President Herbert Hoover declared the gypsum dunes a protected national monument.

Gypsum is also formed as a by-product of sulfide oxidation, amongst others by pyrite oxidation, when the sulfuric acid generated reacts with calcium carbonate. Its presence indicates oxidizing conditions. Under reducing conditions, the sulfates it contains can be reduced back to sulfide by sulfate-reducing bacteria. Electric power stations burning coal with flue gas desulfurization produce large quantities of gypsum as a byproduct from the scrubbers.

Orbital pictures from the Mars Reconnaissance Orbiter (MRO) have indicated the existence of gypsum dunes in the northern polar region of Mars,[13] which were later confirmed at ground level by the Mars Exploration Rover (MER) Opportunity.[14]

Commercial quantities of gypsum are found in the cities of Araripina and Grajaú in Brazil; in Pakistan, Jamaica, Iran (world's second largest producer), Thailand, Spain (the main producer in Europe), Germany, Italy, England, Ireland and Canada[16] and the United States. Large open pit quarries are located in many places including Fort Dodge, Iowa, which sits on one of the largest deposits of gypsum in the world,[17] and Plaster City, California, United States, and East Kutai, Kalimantan, Indonesia. Several small mines also exist in places such as Kalannie in Western Australia, where gypsum is sold to private buyers for additions of calcium and sulfur as well as reduction of aluminum toxicities on soil for agricultural purposes.

Crystals of gypsum up to 11 m (36 ft) long have been found in the caves of the Naica Mine of Chihuahua, Mexico. The crystals thrived in the cave's extremely rare and stable natural environment. Temperatures stayed at 58 °C (136 °F), and the cave was filled with mineral-rich water that drove the crystals' growth. The largest of those crystals weighs 55 tonnes (61 short tons) and is around 500,000 years old.[18]

Synthetic gypsum is recovered via flue-gas desulfurization at some coal-fired power plants. It can be used interchangeably with natural gypsum in some applications.

Gypsum also precipitates onto brackish water membranes, a phenomenon known as mineral salt scaling, such as during brackish water desalination of water with high concentrations of calcium and sulfate. Scaling decreases membrane life and productivity. This is one of the main obstacles in brackish water membrane desalination processes, such as reverse osmosis or nanofiltration. Other forms of scaling, such as calcite scaling, depending on the water source, can also be important considerations in distillation, as well as in heat exchangers, where either the salt solubility or concentration can change rapidly.

A new study has suggested that the formation of gypsum starts as tiny crystals of a mineral called bassanite (CaSO4·​1⁄2H2O).[19] This process occurs via a three-stage pathway:

People can be exposed to gypsum in the workplace by breathing it in, skin contact, and eye contact.

Gypsum is used in a wide variety of applications: