There are seventeen disused railway stations on the Cornish Main Line between Plymouth in Devon and Penzance in Cornwall, England. The remains of nine of these can be seen from passing trains. While a number of these were closed following the so-called "Beeching Axe" in the 1960s, many of them had been closed much earlier, the traffic for which they had been built failing to materialise.

The railway from Plymouth to Truro was opened by the Cornwall Railway on 4 May 1859, where it joined up with the West Cornwall Railway which had been completed from there to Penzance on 16 April 1855. The section from Carn Brea to Angarrack dates back to the Hayle Railway, opened on 23 December 1837. It now forms Network Rail's Cornish Main Line.

The trains of the South Devon Railway finally reached the town of Plymouth on 2 April 1849. Docks were opened adjacent to the station and a new headquarters office was built next door. The station was expanded ready for the opening of the Cornwall Railway on 4 May 1859 and the South Devon and Tavistock Railway on 22 June 1859. It became known as Plymouth Millbay after other stations were opened in the town in 1876-7 at Mutley and North Road.

The station was closed to passengers on 23 April 1941 after bombs destroyed the nearby goods depot; the passenger station being used thereafter only for goods traffic and access to the carriage sheds. All traffic ceased from 14 December 1969 except for goods trains running through to the docks which continued until 30 June 1971.

The site is now occupied by the Plymouth Pavilions leisure complex. Two granite gate posts outside the Millbay Road entrance are all that is left of the station, although a goods shed on what used to be Washington Place is still extant nearby

It was closed on 6 November 1941, during the World War II blitz of Plymouth and Devonport.

The line was doubled and moved on 4 February 1906 and Wearde became the junction for a deviation line to St Germans that allowed the removal of the remaining timber viaducts on the Cornish Main Line. As a result of the deviation the platform was moved in 1907,[3] where access to the platform was by steps from a bridge that carried a road across the railway to Wearde Quay. The signal box that had been at the original location was also relocated and was situated at one end of the platform.

The station closed on 27 October 1930 but the platforms are still in existence and alterations to the road bridge to accommodate the new alignment of 1906 can be clearly seen. The old line was retained as carriage sidings for Saltash until 2 December 1964 and another siding behind the platform was kept in use until 1972.

In January 1860 the railway company was asked to provide a facility here for goods traffic, which they acceded to after local people subscribed £130 towards it and offered the necessary land. Because of this the company offered to build an accompanying passenger station. The station opened on 1 June 1860, providing a service to people and mines in the St Neot area, providing a passing loop until the line was doubled in 1894. A signal box was provided part way along the platform, with sidings at both ends on the down side. During World War 2 the eastern sidings were used by the military for ammunition.[5]

The station was closed on 5 October 1964,and the sidings were taken out of use in January 1968.[5] There are extant earthworks still visible from passing trains.

Due to delays in securing the site for Bodmin Road, the Cornwall Railway provided a temporary station a little further west for the opening of the line on 4 May 1859 until the permanent station was ready on 27 June 1859.

A branch line to Nanpean was opened for goods traffic by the Newquay and Cornwall Junction Railway on 1 July 1869. A small engine shed was built by them on the north side of the station. The shed closed in 1922 and was removed in 1931.[7]

The station was closed and rebuilt a little further west (288 miles 56 chains or 464.62 kilometres)[2] on 1 August 1901, this time with two platforms, and closed to passengers on 14 September 1931. The sidings and branch continue to handle heavy china clay traffic.

The large dryer and storage sheds alongside the main line are the Blackpool clay works; Burngullow clay works are smaller and situated alongside the branch line a short distance from the junction.

Two railway accidents have happened here, both involving runaway china clay trains. On the first occasion a train had left Burngullow with wagons for Par harbour on 29 October 1872. It was unable to stop for signals at St Austell but the driver of the passenger train coming in the other direction saw the train sliding towards it and reversed his train back to Par.

On 9 June 1952 a similar problem occurred with a train on the branch line approaching Burngullow. This time the train ran into a siding where it collided with a stationary engine. Unfortunately the driver of the runaway train, who had stayed at the controls in an attempt to bring it to a halt, later died from his injuries.

The former 'up side' (London bound) station building still remains some seventy years plus after closure.

The signal box was closed in 1986 when the Burngullow to Probus section of the main line was singled, and the signals were then controlled by the Signal Box at Par railway station. The double line was re-instated in 2004.

New houses have been built at Grampound Road since the station closed.

A goods shed was not provided until 1864 when one was erected in the up yard,[8] but with up and down yards the goods traffic developed quickly: 3,580 cattle were dispatched in the twelve months to June 1869, more than any other station on the line. A signal box was erected half way along the up platform

Because of its remote location two cottages were built in 1860 for the station master and his staff. A small village known as Grampound Road grew up around the railway station and continues to expand despite the station's closing (along with Doublebois, Chacewater, Scorrier, Gwinear Road and Marazion) on 5 October 1964, but the signal box remained open until June 1972.[8] Harry Hingston was the last registered paid employee and station master.

The site is easily recognised from passing trains.

The station was nearer to Probus than Ladock, indeed Grampound Road railway station was also convenient for the latter village.

Both platforms still remain here and although grassed over are easily detectable.

The Perranporth line closed on 4 February 1963. The station closed to passengers on 5 October 1964 but continued to be served by goods traffic for many years, latterly for Blue Circle Cement. The Penzance bound platforms can still be seen, complete with much altered station building.

There are two viaducts east of Chacewater. The 128 yard (181 m) Blackwater Viaduct is immediately east of the station site and the 93 yard (132 m) Chacewater Viaduct is a little further east towards Truro.[10] .[11]

Carn Brea was the home of the West Cornwall Railway's workshops, where they maintained the locomotives and rolling stock.

The Hayle Railway provided a station at Penponds from 23 May 1843 until 16 February 1852. It was not replaced when the West Cornwall Railway opened a month later.

The station formerly had two signalboxes: West, on the down platform itself, and East, out in the goods marshalling yard.

The DMU, formerly on site undergoing restoration by the Helston Railway Preservation Company in the cattle dock just east of the level crossing, has now been moved to the company's Prospidnick base.

The Hayle Railway introduced passenger trains on 23 May 1843. The service was closed on 16 February 1852. On 11 March 1852 the West Cornwall Railway opened a new station. The old station had been on the section of the Hayle Railway that was closed entirely as a steep rope-worked incline descended from Angarrack to sea level at Copperhouse, it was replaced by a much gentler incline to the new Hayle railway station. However the new Angarrack station was closed in 1853. (See also Angarrack viaduct.)

An earlier station had been provided at Copperhouse nearer the waterfront by the Hayle Railway from 23 May 1843 until their line closed on 16 February 1852. 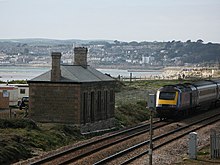 The station is situated on the shore of Mount's Bay with fine views of St Michael's Mount and for many years was home to six old Pullman coaches that were formerly used as camping coaches. Three of these were rescued and restored, and now provide sleeping accommodation at Petworth railway station, which has been converted into a guest house. One was purchased privately, while the others were left to become derelict until broken up on site.[13] In 2006 the remains of these coaches was cleared away from the site to make way for nine holiday cottages, the old station has now been fully restored into a two bedroom bungalow currently owned by the developers.[citation needed] The 1880s station building still stands, but part of the line westwards is currently reduced to a single track.