Gwangju[a] (Korean pronunciation: [kwaŋ.dʑu]) is the sixth-largest city in South Korea. It is a designated metropolitan city under the direct control of the central government's Home Minister. The city was also the capital of South Jeolla Province until the provincial office moved to the southern village of Namak in Muan County in 2005 because Gwangju was promoted to a metropolitan city and was independent of South Jeolla province.

Its name is composed of the words Gwang (Korean: 광; Hanja: 光) meaning "light" and Ju (주; 州) meaning "province." Gwangju was historically recorded as Muju (무주; 武州), in which "Silla merged all of the land to establish the provinces of Gwangju, Ungju, Jeonju, Muju and various counties, plus the southern boundary of Goguryeo and the ancient territories of Silla" in the Samguk Sagi.[4] In the heart of the agricultural Jeolla region, the city is also famous for its rich and diverse cuisine. 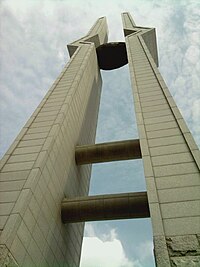 A memorial to commemorate the lives lost in the 1980 Gwangju uprising.

The city was established in 57 BC. It was one of the administrative centres of Baekje during the Three Kingdoms Period.[5]

In 1929, during the period of Imperial Japanese rule, a confrontation between Korean and Japanese students in the city turned into Gwangju Student Independence Movement, a regional demonstration, which culminated in one of the major nationwide uprisings against Imperial Japanese cruelty during the colonial period.

The modern industry was established in Gwangju with the construction of a railway to Seoul. Some of the industries that took hold include cotton textiles, rice mills and breweries. Construction of a designated industrial zone in 1967 encouraged growth in industry, especially in the sectors linked to the automobile industry.

In May 1980, peaceful demonstrations took place in Gwangju against Chun Doo-hwan, leader of the military coup d'état of 12 December 1979. The demonstrations were suppressed by military forces, including elite units of the Special Operations Command. The situation escalated after a violent crackdown, resulting in the Gwangju Uprising, where civilians raided armories and armed themselves. By the time the uprising was suppressed 9 days later, many hundreds of civilians and several police forces / soldiers were dead. After civilian rule was reinstated in 1987, a national cemetery was established, honouring the victims of the incident.[6] Now the South Korean constitution admits the Gwangju Uprising as a root of South Korean democracy.

In 1986, Gwangju separated from Jeollanam-do to become a Directly Governed City (Jikhalsi), and then became a Metropolitan City (Gwangyeoksi) in 1995.[5]

Due to a variety of factors, including the ancient rivalry between Baekje and Silla, as well as the biased priority given to the Gyeongsang region by political leaders in the 2nd half of the 20th century, Gwangju has a long history of voting for left-leaning politicians and is the main stronghold for the liberal Democratic Party of Korea along with its predecessors, as well as the progressive Justice Party.

Gwangju is divided into 5 districts ("Gu").

According to the census of 2005, of the people of Gwangju 33% follow Christianity (20% Protestantism and 13% Catholicism) and 14% follow Buddhism.[7] 53% of the population is mostly not religious or follow Muism and other indigenous religions.

The population model of Gwangju is as follows;[8]

Gwangju has an extensive system of public buses that traverse the city.[14] Bus stops and buses themselves contain stop information in Korean and in English. Local buses, but not the subway or KTX, connect to the intercity Gwangju Bus Terminal known as U-Square.[15]

Gwangju is also served by the Gwangju Airport. 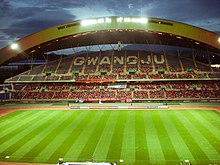 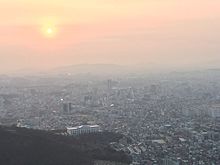 Picture taken from a hill overlooking Gwangju in April 2017.

Gwangju is twinned with:[25]