SMS Panther, an example of the use of German gunboat diplomacy

In international politics, gunboat diplomacy refers to the pursuit of foreign policy objectives with the aid of conspicuous displays of naval power, implying or constituting a direct threat of warfare should terms not be agreeable to the superior force.[1]

Origin of the term 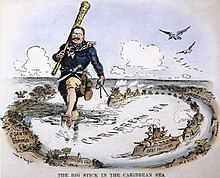 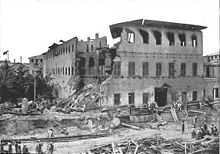 Damage to the palace complex of the Sultan of Zanzibar after bombardment by British cruisers and gunboats on 27 August 1896. The Anglo-Zanzibar War lasted less than 45 minutes.

The term comes from the nineteenth-century period of imperialism, when Western powers – in Europe and the United States – would intimidate other, less powerful states into granting concessions through a demonstration of their superior military capabilities, usually depicted by their naval assets.[citation needed] A country negotiating with a Western power would notice that a warship or fleet of ships had appeared off its coast. The mere sight of such power almost always had a considerable effect, and it was rarely necessary for such boats to use other measures, such as demonstrations of firepower.

A notable and controversial example of gunboat diplomacy was the Don Pacifico Incident in 1850, in which the British Foreign Secretary Lord Palmerston dispatched a squadron of the Royal Navy to blockade the Greek port of Piraeus in retaliation for the harming of a British subject, David Pacifico, in Athens, and the subsequent failure of the government of King Otto to compensate the Gibraltar-born (and therefore British) Pacifico.

The effectiveness of such simple demonstrations of a nation's projection of force capabilities meant that those nations with naval power, especially Britain, could establish military bases (for example, Diego Garcia) and arrange economically advantageous relationships around the world. Aside from military conquest, gunboat diplomacy was the dominant way to establish new trade partners, colonial outposts, and expansion of empire.

Those lacking the resources and technological advancements of Western empires found that their own peaceable relationships were readily dismantled in the face of such pressures, and they therefore came to depend on the imperialist nations for access to raw materials and overseas markets.

The British diplomat and naval thinker James Cable spelled out the nature of gunboat diplomacy in a series of works published between 1971 and 1993. In these, he defined the phenomenon as "the use or threat of limited naval force, otherwise than as an act of war, in order to secure advantage or to avert loss, either in the furtherance of an international dispute or else against foreign nationals within the territory or the jurisdiction of their own state."[2] He further broke down the concept into four key areas:

Gunboat diplomacy comes in contrast to the views held prior to the 18th century influenced by Hugo Grotius, De Jure Belli ac Pacis, in which he circumscribed the right to resort to force with what he described as "temperamenta".

Gunboat diplomacy is distinct from "Defence Diplomacy", which is understood to be the peaceful application of resources from across the spectrum of defence, to achieve positive outcomes in the development of bilateral and multilateral relationships.[citation needed] "Military diplomacy" is a sub-set of this, tending to refer only to the role of military attachés and their associated activity. Defence diplomacy does not include military operations, but subsumes such other defence activity as international personnel exchanges, ship and aircraft visits, high-level engagement (e.g., ministers and senior defence personnel), training and exercises, security-sector reform,[3] and bilateral military talks.[4]

Gunboat diplomacy is considered a form of hegemony.[5] As the United States became a military power in the first decade of the 20th century, the Rooseveltian version of gunboat diplomacy, Big Stick Diplomacy, was partially superseded by dollar diplomacy: replacing the big stick with the "juicy carrot" of American private investment. However, during Woodrow Wilson's presidency, conventional gunboat diplomacy did occur, most notably in the case of the U.S. Army's occupation of Veracruz in 1914, during the Mexican Revolution.

Gunboat diplomacy in the post-Cold War world is still largely based on naval forces, owing to the U.S. Navy's overwhelming sea power. U.S. administrations have frequently changed the disposition of their major naval fleets to influence opinion in foreign capitals.[citation needed] More urgent diplomatic points were made by the Clinton administration in the Yugoslav wars of the 1990s (in alliance with the United Kingdom's Blair government) and elsewhere, using sea-launched Tomahawk missiles,[6] and E-3 AWACS airborne surveillance aircraft in a more passive display of military presence.[7][8][9] 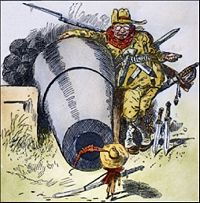