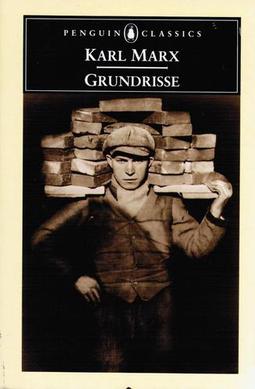 The Grundrisse der Kritik der Politischen Ökonomie (Fundamentals of a Critique of Political Economy)[1] is a lengthy, unfinished manuscript by the German philosopher Karl Marx. The series of seven notebooks was rough-drafted by Marx, chiefly for purposes of self-clarification, during the winter of 1857–8. Left aside by Marx in 1858, it remained unpublished until 1939.[2]

The Grundrisse is very wide-ranging in subject matter and covers all six sections of Marx's economics (of which only one, the first volume of Das Kapital, ever reached a final form). It is often described as the rough draft of Das Kapital, although there is considerable disagreement about the exact relationship between the two texts, particularly around the issue of methodology.[citation needed]

Due to its breadth and its incorporation of themes from Marx's earlier writings, the Grundrisse is central to Marx's body of work. Its subject matter includes the prices of production, relations of production, distribution, exchange, alienation, value, labor, capitalism, the rise of technology and automation, pre-capitalist forms of social organization, and the preconditions for a communist revolution. Scholars have noted major differences between the Marx's earlier writings, such as The German Ideology and The Communist Manifesto, and the later ones, Das Kapital and Grundrisse,[3] suggesting that Marx's views evolved, though the main themes remained the same.[citation needed]

As Martin Nicolaus and others have argued, the Grundrisse is crucial for understanding Marx's mature analysis of capitalism, even though, historically, it has been far less influential in the development of the various strands of Marxist theory than earlier texts such as the Communist Manifesto, the Economic and Philosophic Manuscripts of 1844, and The German Ideology. Towards the end of his life, Marx, according to Nicolaus, viewed the latter “with a scepticism bordering on rejection.” The Grundrisse, on the other hand, was one of the few texts which Marx spoke of “with a tone of achievement and a sense of accomplishment.”[4] If this is true, possibly the main reason is that the more substantive first part of The German Ideology was largely written by Friedrich Engels while the subsequent parts, satirizing the linguistic apostasies and word-mongering of Left-Hegelian philosophers, were written by Marx himself.[citation needed]

French philosopher Louis Althusser believed that Marx's thought had been misunderstood and underestimated. He condemned various interpretations of Marx—such as historicism, idealism, economism—on the grounds that they fail to realise that Marx's "science of history", historical materialism, represents a revolutionary view of social change. Althusser believed these errors to result from the notion (mistaken in his view) that Marx's entire body of work forms a coherent whole. Althusser proffered a radical "epistemological break" in Marx's thought, which can be seen by comparing the unpublished Grundrisse and Das Kapital.[5]

Grundrisse became available in different languages over a period of time.[6]

The translation of the Grundrisse into English in 1973 had a profound effect on the then-emerging field of cultural studies.[7] Stuart Hall, at that time the director of the Centre for Contemporary Cultural Studies at the University of Birmingham, led several seminars on Marx's introduction to the Grundrisse, particularly "The method of political economy." These seminars culminated in the publication of a working paper titled “Marx’s Notes on Method: A ‘Reading’ of the ‘1857 Introduction.’”[8] According to Greg Wise, in that working paper, Hall lays the groundwork for theories of overdetermination and articulation, both of which would be used in a study of mugging in the United Kingdom, Policing the Crisis.[7]