Advertisement - You can get this game from STEAM
Place in West Coast, New Zealand

Greymouth (/ˈɡreɪmaʊθ/) (Māori: Māwhera) is the largest town in the West Coast region in the South Island of New Zealand, and the seat of the Grey District Council. The population of the whole Grey District is 13,750, which accounts for 42% of the West Coast's inhabitants. The Greymouth urban area had an estimated population of 8,160 (June 2019).[1]

Aoraki / Mount Cook and other mountains from Greymouth's beach

The town is located at the mouth of the Grey River, on a narrow coastal plain close to the foot of the Southern Alps. In clear weather, Aoraki / Mount Cook can be clearly seen to the south from near the town. The mouth of the river divides the town into three areas: Blaketown, close to the river's mouth on the south bank; Karoro, to the southeast, separated from Blaketown by a series of small estuarine lakes; and Cobden, formerly a separate town, on the river's north bank.

Greymouth is on State Highway 6, which connects it with Hokitika in the south and Westport in the north. It also stands at the terminus of State Highway 7, which runs through Dobson and Reefton, eventually reaching North Canterbury and its junction with State Highway 1 at Waipara, 55 kilometres (34 mi) north of Christchurch, via Lewis Pass. Highway 73 is accessed 20 kilometres (12 mi) south of Greymouth, which is the most direct route to or from Christchurch. The town is also the western terminus of the Midland line from Christchurch. Large coal trains often operate from Greymouth on this line to Christchurch. The famous TranzAlpine train also terminates at Greymouth. The Greymouth Airport is only 1.9 kilometres (1.2 mi) south of the centre of the town.

Köppen-Geiger climate classification system classifies its climate as oceanic (Cfb).[2] Greymouth receives mean annual rainfall high by New Zealand standards and this rainfall is distributed relatively evenly throughout the year.[3] This is due to its position receiving marine westerlies throughout the year that often do not rise above the Southern Alps. As a result of this, it creates a rain shadow effect that sees east coast locations having far sunnier and warmer summers. This extreme marine influence also shelters the Greymouth area from hot summer days and cold winter nights. Snow is rare, the last reported event occurring on 4 August 2019.[4]

Māori had lived in Greymouth for a considerable time before European settlement, and called the area Māwhera (for 'wide spread river mouth',[6] still an alternative name for the Grey River). The first European to visit the site of what is now Greymouth was Thomas Brunner in 1846. Brunner discovered coal in the Grey valley, and several places in the region (notably the town of Brunner and Lake Brunner) bear his name. Brunner himself named the Grey River after prominent 19th century New Zealand politician Sir George Grey.[7]

As numbers of colonists continued to increase in Nelson and Canterbury, interest grew in settling the West Coast, but the land was still owned by Māori – Poutini Ngāi Tahu. In 1857 Poutini Ngāi Tahu chiefs wrote to Donald McLean, the New Zealand government land purchase officer, offering to sell the land for £2500, as long as some land was reserved for their use, and they kept their rights to the pounamu (greenstone) of the Arahura River.[8] In 1859, James Mackay was sent to broker a purchase deal, the Arahura Deed. This was signed in Māwhera by leading chiefs on 21 May 1860, and sold the entire West Coast to the Crown for just £300 ($36,000 in 2019 dollars), apart from a scattering of reserves totalling 4,000 hectares (40 km2).[9] (Just after the signing, Mackay capsized his canoe in the Grey River, and some of the writing in the document is smudged to this day.)[9] The reserves included Māwhera, now the centre of Greymouth.

John Rochfort undertook the original survey of the site of the township in 1865.[12][13]

From 1853 until the abolition of provinces in 1876, Greymouth was first part of Canterbury Province (the West Coast part of the Province was known as West Canterbury) and then part of an independent Westland Province. However Cobden, on the north (or right) bank of the Grey River was a part of Nelson Province from 1853 to 1876. The boundary between the Canterbury and Nelson provinces had been set as a straight line from the head of the Hurunui River to Lake Brunner at a time when the area was virtually uninhabited, but the West Coast Gold Rush straddled that boundary, with a population boom also straddling the boundary.[14] In 1866, there had been a proposal for portions of Canterbury Province, including the urban area of Greymouth and the rural area south, to be annexed and solely administered by Nelson Province.[15] The situation for the citizens of the area was partially alleviated with the creation of the County of Westland – which had all the administrative powers of a provincial council, but saw the legislative powers remain with Parliament in Wellington. Members of Parliament were not happy with having to spend their time on local legislation, and in 1873 the government elevated the county to full provincial status as Westland Province.

Greymouth was regularly flooded by the Grey River. Since the 1860s, the town had been under water almost two dozen times. When the town was flooded twice in 1988, the mayor of Greymouth, Barry Dallas, embarked on an ambitious project to build a flood protection wall. Since its completion, river flooding has not affected the town again.[16]

In 1988 flooding occurred in May and September. The May event brought flooding to the West Coast, particularly the Greymouth area. A Civil Defence Emergency was declared for the Greymouth Borough on 20 May, and roads and properties suffered damage. Four hundred people had to be evacuated with 102 houses affected and 2 being condemned.[17]

Greymouth also has an historic World War II gun emplacement at Cobden. The Grey District Council destroyed part of this site, without consultation, in 2007 to make way for a sewer line.[18]

On 10 March 2005, a major tornado, which started as a waterspout, made landfall in the suburb of Blaketown. It quickly moved through the town passing just south of the main town centre. The tornado was one of the largest reported in recent history in the West Coast region, caused millions of dollars in damage, and injured several people.[19] Previous tornadoes which had struck Greymouth on 16 June 2003 and 28 March 2001 had destroyed several buildings.[19]

Greymouth was founded during the West Coast gold rush of the 1860s, but for 150 years after this its economy was based on coal mining and native timber forestry. These brought prosperity to the town which at one point had 47 hotels (today it has only six).[20] Fishing has long been important to the town, despite the fact that the entrance to the Grey River has two notoriously dangerous sandbars; an inner and outer bar.[21]

Beginning in the 1960s, forestry and coal mining began to decline on the West Coast. The planned opening of the Pike River Mine in early 2008 spurred new investments in upgrading port facilities at the town.[22] The opening of the new mine, as well as the planned Spring Creek mine, was called the biggest investment happening in the area for a hundred years; coal barges travelling to and from reshipment facilities in Taranaki would have carried containerised cargo to the town and saved the port from closure.[23] On 19 November 2010, there was an explosion at the Pike River Mine, trapping 29 miners.[24] Attempts to rescue the trapped miners were repeatedly delayed due to high levels of methane gas, until a second explosion on 24 November dashed all hope of survival for the miners.[25] Pike River Coal went into receivership in the wake of the disaster and was purchased by Solid Energy, which closed the Spring Creek Mine in 2012 with the loss of 220 jobs and went into voluntary administration in August 2015.

After the decline in coal mining and forestry, the West Coast economy has become increasingly dependent on ecotourism. Thousands of coal mining jobs had declined to just 60, and hundreds of tourism jobs had replaced them.[20] During Greymouth's boom years, much of the centre of town was built up in brick Art Deco building on leased land in the Mawhera Reserve. This land was administered for many years by the Department of Maori Affairs, but was returned to the control of the iwi in 1976. At that time Mawhera Inc's total assets were worth $2m, but had grown to $123m by 2018. Mawhera Inc is now the town's largest landlord, with 1600 shareholders.[20] After regulations were tightened following the 2010 Canterbury earthquake, many of Greymouth's heritage buildings were found to be unsafe, and the combination of earthquake-strengthening costs and being on lease land makes many of them uneconomic to restore and occupy.[20]

Greymouth is also known for its pounamu ("greenstone", a form of jade) carving industry which goes back to Māori origins. The town's local brewery, Monteith's, has produced beer since 1868 which is now sold nationwide.[7] 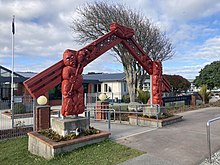 St Patrick's School is a full primary (years 1–8) school with a roll of 105.[30] Both are state integrated Catholic schools. The schools are adjacent to each other and have a shared Board of Trustees.[31][32]

There is also a tertiary provider. Tai Poutini Polytechnic has its head office based in Greymouth. It also has campuses in Auckland, Christchurch, Hokitika, Reefton, Wanaka and Westport.