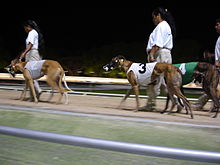 Several greyhounds before a race

Greyhound racing is an organized, competitive sport in which greyhounds are raced around a track. There are two forms of greyhound racing, track racing (normally around an oval track) and coursing.[1] Track racing uses an artificial lure (now based on a windsock)[2] that travels ahead of the dogs on a rail until the greyhounds cross the finish line. As with horse racing, greyhound races often allow the public to bet on the outcome.

Animal rights and animal welfare groups[3] are critical of the welfare of greyhounds in the commercial racing industry. A greyhound adoption movement spearheaded by kennel owners has arisen to assist retired racing dogs in finding homes as pets, with an estimated adoption rate of over 95% in the US.[4]

Greyhound during a race

Modern greyhound racing has its origins in coursing.[5] The first recorded attempt at racing greyhounds on a straight track was made beside the Welsh Harp reservoir, Hendon, England, in 1876, but this experiment did not develop. The industry emerged in its recognizable modern form, featuring circular or oval tracks, with the invention of the mechanical, or artificial, hare in 1912 by an American, Owen Patrick Smith. O.P. Smith had altruistic aims for the industry to stop the killing of the jack rabbits and see "greyhound racing as we see horse racing".[6] In 1919, Smith opened the first professional dog-racing track with stands in Emeryville, California.[7] The Emeryville arena was torn down in February 1920 to make way for the construction of a modern racetrack using the mechanical lure, described in the press as the "automatic rabbit." [8] The first race at the new park was on Saturday, May 29, 1920. [9]

The certificates system led the way to parimutuel betting, as quarry and on-course gambling, in the United States during the 1930s.

The oval track and mechanical hare were introduced to Britain, in 1926, by another American, Charles Munn, in association with Major Lyne-Dixson, a Canadian, who was a key figure in coursing. Finding other supporters proved rather difficult, however, and with the General Strike of 1926 looming, the two men scoured the country in an attempt to find others who would join them. Eventually they met Brigadier-General Critchley, who introduced them to Sir William Gentle.[1] Between them they raised £22,000, and like the American 'International Greyhound Racing Association' (or the I.G.R.A.), they launched the Greyhound Racing Association holding the first British meeting at Manchester's Belle Vue Stadium. The industry was successful in cities and towns throughout the UK – by the end of 1927, there were forty tracks operating.

Middle-class reformers were outraged,[10] and the working-class delighted, with the emergence in the late-1920s of Greyhound racing as an entertaining new sport and betting opportunity. At first it seemed modern, glamorous, and American, but the middle class lost interest when working-class audiences took over.[11][12] The working class appreciated the nearby urban locations of the tracks and the evening times of the meetings. Betting has always been a key ingredient of greyhound racing, both through on-course bookmakers and the totalisator, first introduced in 1930. Like horse racing, it is popular to bet on the greyhound races as a form of parimutuel betting.

Greyhound racing enjoyed its highest UK attendances just after the Second World War—for example, attendances during 1946 were estimated to be around 75 million based on an annual totalisator turnover of £196,431,430.[13] [14] The industry experienced a decline beginning in the early 1960s, after the 1960 UK Betting and Gaming Act permitted off-course cash betting. Sponsorship, limited television coverage, and the later abolition of on-course betting tax have partially offset this decline.

Greyhounds rounding a turn on a track

Commercial greyhound racing is characterized by several criteria (varying depending on country) and can include legalized gambling, the existence of a regulatory structure, the physical presence of racetracks, whether the host state or subdivision shares in any gambling proceeds, fees charged by host locations, the use of professional racing kennels, the number of dogs participating in races, the existence of an official racing code, and membership in a greyhound racing federation or trade association.[15]

In addition to the eight countries where commercial greyhound racing exists, in at least twenty-one countries dog racing occurs, but has not yet reached a commercial stage.[16]

The medical care of a racing greyhound is primarily the responsibility of the trainer while in training. All tracks in the United Kingdom have to have a veterinary surgeon and veterinary room facilities on site during racing.[17] The greyhounds require annual vaccination against distemper, infectious canine hepatitis, parvovirus, leptospirosis, and a vaccination to minimize outbreaks of diseases such as kennel cough.[18] All greyhounds in the UK must pass a pre-race veterinary inspection before being allowed to take part in that race.[19]

The racing industry (in several countries) actively works to prevent the spread of doping cases. Attempts are being made to recover urine samples from all greyhounds in a race, not just the winners. Greyhounds from which samples cannot be obtained for a certain number of consecutive races are subject to being ruled off the track in some countries. Violators are subject to criminal penalties and loss of their racing licenses by state gaming commissions and a permanent ban from the National Greyhound Association. The trainer of the greyhound is at all times the "absolute insurer" of the condition of the animal. The trainer is responsible for any positive test regardless of how the banned substance has entered the greyhound's system.[18]

Generally, a greyhound's career will end between the ages of four and six – after the dog can no longer race, or possibly when it is no longer competitive. The best dogs are kept for breeding and there are industry-associated adoption groups and rescue groups that work to obtain retired racing greyhounds and place them as pets. In the United Kingdom, the Greyhound Board of Great Britain (GBGB) have introduced measures to locate where racing greyhounds reside after they have retired from racing and as from 2017 records have been available to the public.[20] There have been isolated cases of controversy, such as greyhounds sold to research labs during 2013.[21]

Several organizations, such as British Greyhounds Retired Database, Greyhound Rescue West of England, Birmingham Greyhound Protection, GAGAH, Adopt-a-Greyhound and Greyhound Pets of America, and the Retired Greyhound Trust try to ensure that as many of the dogs as possible are adopted. Some of these groups also advocate better treatment of the dogs while at the track and/or the end of racing for profit. In recent years the racing industry has made significant progress in establishing programs for the adoption of retired racers.[17] In addition to actively cooperating with private adoption groups throughout the country, many race tracks have established their own adoption programs at various tracks.[17]

Greyhounds Australasia was formed in 1937 (as the Australian and New Zealand Greyhound Association) and consists of governing bodies in Australian states and New Zealand, which regulate greyhound welfare and living conditions. Most racing authorities in Australia have organized and funded Greyhound Adoption arms, which house dozens of greyhounds a month, as well as partly supporting private volunteer organisations.[22]

Each Australian state and territory has a governing greyhound racing body.[23] In recent years racing in New South Wales has been subject to scrutinisation that led to a bill being passed through the government of the state New South Wales in 2016, banning greyhound racing from the middle of 2017 but the ban was reversed in late 2016, albeit with several new restrictions on the industry.[24]

Greyhound racing is a popular industry in Ireland with the majority of tracks falling under the control of the Irish Greyhound Board (IGB) which is a commercial semi-state body and reports to the Department of Agriculture, Food and the Marine.[25] The vast majority of greyhounds racing in the UK are imported from Irish breeders (estimated 90%). In the greyhound industry Northern Irish tracks are considered to be in the category of Irish greyhound racing and the results are published by the IGB. They do not come under the control of the Greyhound Board of Great Britain.

An independent 2014 review of the Irish Greyhound Board criticized the body's corporate governance, its handling of animal welfare issues, and poor financial performance [26] which has been somewhat addressed with a new 'Strategic Plan 2018-2022'.[27]

Racing in New Zealand is governed by the New Zealand Racing Board (NZRB) in accordance with the Racing Act 2003.[28] Totalisator betting was not allowed until 1981.[29]

There are eleven racing clubs in New Zealand who are directly responsible for the management of racetracks.[30] Around 700 dogs are bred each year for racing,[31] and around 200–300 are imported from Australia.[32] Following concern over the welfare of racing greyhounds the Greyhound Racing Association initiated an Independent Welfare Review during 2013. The review found no issues into the care of greyhounds in racing but found issues with population management (greyhounds not making the track and greyhounds after retirement).[33] In 2017 a second report was commissioned, this time by the New Zealand Racing Board, led by former High Court Judge Rodney Hansen who made 20 recommendations to further advance the welfare of greyhounds.[34] On Dec 20 2017, the New Zealand government's Minister for Racing Hon Winston Peters, said the reports findings were "disturbing and deeply disappointing",[35] and "simply unacceptable".[36] In December 2018 the New Zealand government considered a second petition from Aaron Cross and 129 others seeking a prohibition on racing. The government requested that the greyhound racing industry continued to implement the Hansen recommendations and invited the NZGRA to update them on their progress.[37]

Greyhound racing in South Africa is solely an amateur pursuit. The South African Amateur Greyhound Union (SAAGU) organises events that do not contravene the Freestate Provincial Ordinance which restricts spectators from attending events. Racing has been banned by the government since 1946 following rigged gambling.[38] Greyhounds are therefore kept with their owners and not trainers.[39]

Greyhound racing is a popular industry in Great Britain with attendances at around 3.2 million at over 5,750 meetings in 2007. As of 2020, there are 21 registered stadiums regulated by the Greyhound Board of Great Britain and accredited by UKAS.[40][41] There are an additional four independent tracks in Britain. They all use a parimutuel betting tote system and on-course betting.

On 24 July 1926, the first oval track greyhound race took place at Belle Vue Stadium.[42] This marked the first modern greyhound race in Great Britain. Greyhound racing as a whole in the UK peaked in 1946, but has been in decline since the opening of betting shops in 1961, despite a small revival of popularity in the late 1980s.[43] 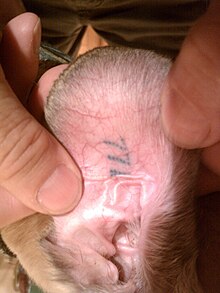 Ear tattoo on an American racing greyhound. Ear tattoos are used for identification of dogs during their racing careers.
Main article: Greyhound racing in the United States

The states of Alabama, Arkansas, Iowa, Texas and West Virginia have active racing industries. Fifteen states without live racing allow simulcast betting on greyhound races in other states.[47][48] Between 2001 and 2011, the total amount gambled on greyhound racing nationwide declined by 67%.[49]