Enlarge Handshake Salute
Expression to acknowledge another person
This article is about the social act. For other uses, see Greeting (disambiguation).
"Good evening" redirects here. For the Marshall Crenshaw album, see Good Evening (album). For the song by John Reuben, see John Reuben. 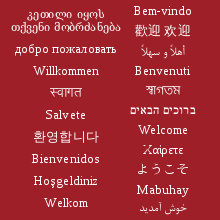 Translations of the word welcome shown in many places frequented by foreigners or tourists to welcome people of all different nationalities.

Greeting is an act of communication in which human beings intentionally make their presence known to each other, to show attention to, and to suggest a type of relationship (usually cordial) or social status (formal or informal) between individuals or groups of people coming in contact with each other. Greetings are sometimes used just prior to a conversation or to greet in passing, such as on a sidewalk or trail. While greeting customs are highly culture- and situation-specific and may change within a culture depending on social status and relationship, they exist in all known human cultures. Greetings can be expressed both audibly and physically, and often involve a combination of the two. This topic excludes military and ceremonial salutes but includes rituals other than gestures. A greeting, or salutation, can also be expressed in written communications, such as letters and emails.

Some epochs and cultures have had very elaborate greeting rituals, e.g. greeting a sovereign. Conversely, secret societies have often furtive or arcane greeting gestures and rituals, such as a secret handshake, which allows members to recognize each other.

In some languages and cultures, the same word or gesture is used as both greeting and farewell. Examples are "Good day" in English, "Sat Shri Akaal" in Punjabi, "As-Salamualaikum" in Arabic, "Aloha" in Hawaiian, "Shalom" in Hebrew, "Namaste" in Hindi,"Ayubowan" in Sri Lanka and "Ciao" in Italian. The bow and handshake are also used for both greeting and leave-taking. And in many south Asian countries like Sri Lanka and India, they put their arms together and place it near to heart which shows they are greeting from the bottom of the heart. In India they say "Namaste" and in Sri Lanka they say "Ayubowan" which means live longer. 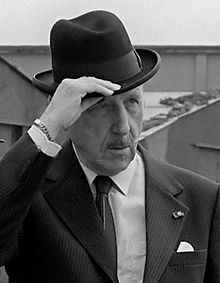 The civilian Secretary General of NATO Joseph Luns from the Netherlands tips his hat at a troop review in 1983, in lieu of a military salute. This (the full gesture is shown here) was by then becoming old-fashioned as a general social greeting, but had once been normal.

A greeting can consist of an exchange of formal expression, kisses, handshakes, hugs, and various gestures. The form of greeting is determined by social etiquette, as well as by the relationship of the people.

Beyond the formal greeting, which may involve a verbal acknowledgment and sometimes a handshake, facial expression, gestures, body language, and eye contact can all signal what type of greeting is expected.[1] Gestures are the most obvious signal, for instance, greeting someone with open arms is generally a sign that a hug is expected.[2] However, crossing arms can be interpreted as a sign of hostility. The facial expression, body language, and eye contact reflect emotions and interest level. A frown, slouching and lowered eye contact suggests disinterest, while smiling and an exuberant attitude is a sign of welcome.

Many different gestures are used throughout the world as simple greetings. In Western cultures, the handshake is very common, though it has numerous subtle variations in the strength of grip, the vigour of the shake, the dominant position of one hand over the other, and whether or not the left hand is used.

Historically, when men normally wore hats out of doors, male greetings to people they knew, and sometimes those they did not, involved touching, raising slightly ("tipping"), or removing their hat in a variety of gestures. This basic gesture remained normal in very many situations from the Middle Ages until men typically ceased wearing hats in the mid-20th century. Hat-raising began with an element of recognition of superiority, where only the socially inferior party might perform it, but gradually lost this element; King Louis XIV of France made a point of at least touching his hat to all women he encountered. However, the gesture was never used by women, for whom their head-covering included considerations of modesty. When a man was not wearing a hat he might touch his hair to the side of the front of his head to replicate a hat-tipping gesture. This was typically performed by lower classmen to social superiors, such as peasants to the land-owner, and is known as "tugging the forelock", which still sometimes occurs as a metaphor for submissive behaviour.

The Arabic term salaam (literally "peace", from the spoken greeting that accompanies the gesture), refers to the practice of placing the right palm on the heart, before and after a handshake.

In Moroccan society, same-sex people don't greet each other the same as do opposite sex. While same-sex people (men or women) will shake hands, kiss on the cheek and even hug multiple times, a man and woman greeting each other in public won't go further than a handshake. Which is due to the Moroccan culture that is quite conservative. Verbal greetings in Morocco can go from a basic salaam, to asking about life details to make sure the other person is doing good.[3] In the kingdom of Morocco, you should always greet with your right hand as the left hand is traditionally considered unclean.[4] 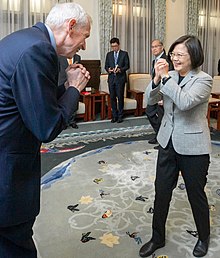 A Chinese greeting features the right fist placed in the palm of the left hand and both shaken back and forth two or three times, it may be accompanied by a head nod or bow. The gesture may be used on meeting and parting, and when offering thanks or apologies.

In India, it is common to see the Namaste greeting (or "Sat Sri Akal" for Sikhs) where the palms of the hands are pressed together and held near the heart with the head gently bowed.

Adab, meaning respect and politeness, is a hand gesture used as a Muslim greeting of South Asian Muslims, especially of Urdu-speaking communities of Uttar Pradesh, Hyderabadi Muslims, Bengali Muslims and Muhajir people of Pakistan. The gesture involves raising the right hand towards the face with palm inwards such that it is in front of the eyes and the fingertips are almost touching the forehead, as the upper torso is bent forward. [5] It is typical for the person to say "adab arz hai", or just "adab". It is often answered with the same or the word "Tasleem" is said as an answer or sometimes it is answered with a facial gesture of acceptance.

In Indonesia, a nation with a huge variety of cultures and religions, many greetings are expressed, from the formalized greeting of the highly stratified and hierarchical Javanese to the more egalitarian and practical greetings of outer islands.

Javanese, Batak and other ethnicities currently or formerly involved in the armed forces will salute a Government-employed superior, and follow with a deep bow from the waist or short nod of the head and a passing, loose handshake. Hand position is highly important; the superior's hand must be higher than the inferior's. Muslim men will clasp both hands, palms together at the chest and utter the correct Islamic slametan (greeting) phrase, which may be followed by cheek-to-cheek contact, a quick hug or loose handshake. Pious Muslim women rotate their hands from a vertical to the perpendicular prayer-like position in order to barely touch the fingertips of the male greeter and may opt-out of the cheek-to-cheek contact.

If the male is an Abdi Dalem royal servant, courtier or particularly "peko-peko" (taken directly from Japanese to mean obsequious) or even a highly formal individual, he will retreat backwards with head downcast, the left arm crossed against the chest and the right arm hanging down, never showing his side or back to his superior. His head must always be lower than that of his superior. Younger Muslim males and females will clasp their elder's or superior's outstretched hand to the forehead as a sign of respect and obeisance.

If a manual worker or a person with obviously dirty hands salute or greets an elder or superior, he will show deference to his superior and avoid contact by bowing, touching the right forehead in a very quick salute or a distant "slamet" gesture.

The traditional Javanese Sungkem involves clasping the palms of both hands together, aligning the thumbs with the nose, turning the head downwards and bowing deeply, bending from the knees. In a royal presence, the one performing sungkem would kneel at the base of the throne.

A gesture called a wai is used in Thailand, where the hands are placed together palm to palm, approximately at nose level, while bowing. The wai is similar in form to the gesture referred to by the Japanese term gassho by Buddhists. In Thailand, the men and women would usually press two palms together and bow a little while saying "Sawadee ka" (female speaker) or "Sawadee krap" (male speaker). 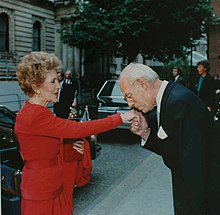 In Europe, the formal style of upper-class greeting used by a man to a woman in the Early Modern Period was to hold the woman's presented hand (usually the right) with his right hand and kiss it while bowing. In cases of a low degree of intimacy, the hand is held but not kissed. The ultra-formal style, with the man's right knee on the floor, is now only used in marriage proposals, as a romantic gesture.

Cheek kissing is common in Europe, parts of Canada (Quebec) and Latin America and has become a standard greeting mainly in Southern Europe but also in some Central European countries.

While cheek kissing is a common greeting in many cultures, each country has a unique way of kissing. In Russia, Poland, Slovenia, Serbia, Macedonia, Montenegro, the Netherlands, Iran and Egypt it is customary to "kiss three times, on alternate cheeks", but kiss twice in Bosnia and Herzegovina.[6] Italians, Hungarians and Romanians usually kiss twice in a greeting and in Mexico and Belgium only one kiss is necessary. In the Galapagos women kiss on the right cheek only[7] and in Oman, it is not unusual for men to kiss one another on the nose after a handshake.[8] French culture accepts a number of ways to greet depending on the region. Two kisses are most common throughout all of France but in Provence three kisses are given and in Nantes four are exchanged.[9] However, in Finistère at the western tip of Brittany and Deux-Sèvres in the Poitou-Charentes region, one kiss is preferred.[10] [11] 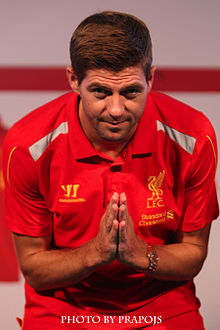 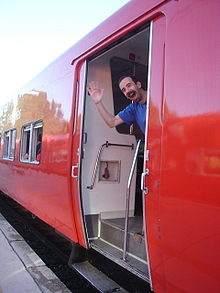