The following services use part or all of the IND Crosstown Line,[2] whose services' bullets are colored lime green:

The only service to use the Crosstown Line is the G. No revenue service has run over the line north of Court Square since 2010.[3]

The north end of the Crosstown Line is a flying junction with the IND Queens Boulevard Line and 60th Street Tunnel Connection just south of Queens Plaza. The line then travels south as a two-track line, except for a center relay track south of Court Square. At the turn from Marcy Avenue to Lafayette Avenue, two center tracks appear, merging into one after crossovers to the main tracks. These tracks were to be used for a split to another line in a 1931 expansion plan. This center track continues through Bedford–Nostrand Avenues and then ends with crossovers to the main tracks, but space remains in the center through Classon Avenue for the third track.[3]

At Hoyt–Schermerhorn Streets, the Crosstown Line passes through the middle of the four-track IND Fulton Street Line. Cross-platform interchange is available between the lines, but no track connections exist. After Hoyt–Schermerhorn Streets, the line turns south and ends as a merge into the local tracks of the IND Culver Line, just south of the split of that line into local and express tracks.[3]

Plans for a crosstown subway line were floated as early as 1912.[4][5] In 1923, a plan for such a line, to be operated by the Brooklyn Rapid Transit Company (BRT) from the Queensboro Bridge under Jackson Avenue, Manhattan Avenue, Roebling Street, Bedford Avenue, and Hancock Street to Franklin Avenue at the north end of the BMT Franklin Avenue Line,[6] was adopted by the city.[7] However, the following year, Mayor Hylan announced his opposition to it.[8] In addition, residents of central Brooklyn, which was already heavily developed, opposed an elevated line because of noise and aesthetic concerns, but the BRT would not build a subway because an elevated was the cheapest option.[5]

Eventually, the line was moved and incorporated into the city's Independent Subway System (IND).[9] The junction with the IND Queens Boulevard Line in Long Island City was originally supposed to have a second wye, with service from Manhattan via the 53rd Street Tunnel planned to feed into the Crosstown Line. This would have been part of a loop service between the Crosstown and Eighth Avenue Lines.[9][10] 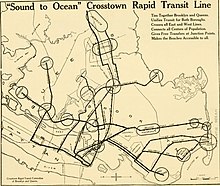 The first contract to build the Crosstown Line, for a section north of Nassau Avenue in Brooklyn, was awarded in 1928.[11] The portion of the line crossing Newtown Creek between Brooklyn and Queens, now known as the Greenpoint Tubes, was built without the use of a tunneling shield or compressed air, contrary to the convention of the time. The tunnel was bored through solid rock, crossing under the East River Tunnels of the Long Island Rail Road and the IRT Flushing Line, then lined with concrete.[12]

On August 19, 1933, the line was opened north of Nassau Avenue, and the GG began operation to Queens Plaza.[13] The entire Crosstown Line was completed and connected to the IND Culver Line on July 1, 1937, whereupon the GG was extended in both directions to Smith–Ninth Streets and Forest Hills–71st Avenue.[14]

In 1946, as part of a $1 billion plan issued by the New York City Board of Transportation, a branch of the IND Crosstown Line would be built, with the routing via Franklin Avenue and connecting with the BMT Brighton Line. This would have replaced the BMT Franklin Avenue Line.[15][16] Over the next 77 years, the termini for the GG (relabeled G in 1985)[17] had varied, including being extended to Jamaica–179th Street[18] or cut back to Queens Plaza or Long Island City–Court Square. Service was also extended to Church Avenue several times, the most recent extension being in 2009. During weekend service disruptions on the F service between Jay and Bergen Streets, trains were extended beyond Church Avenue to Coney Island. On April 19, 2010, G service was permanently cut back from the Queens Boulevard Line due to budget cuts.[19]

The line is noted for many of its stations being in particularly poor condition.

Repairs of the Greenpoint Tubes from Hurricane Sandy

In 2012, flood waters from Hurricane Sandy caused significant damage to the Greenpoint Tubes under the Newtown Creek. Although the G was back in service days after the hurricane, the tube needed permanent repairs. To allow for these repairs, G service was curtailed for twelve weekends between July and December 2013, as well as daily between July 25 and September 2, 2014.[20]

The 2015–2019 MTA Capital Plan called for the Crosstown Line's Classon Avenue and Flushing Avenue stations, along with 31 others, to undergo a complete overhaul as part of the Enhanced Station Initiative. Updates would include cellular service, Wi-Fi, USB charging stations, interactive service advisories and maps, improved signage, and improved station lighting.[21][22] However, in April 2018, it was announced that cost overruns had forced the MTA to reduce the number of subway stations included in the program from 33 stations to 20. The stations to be renovated along the IND Crosstown Line were among the 13 stations without funding, which will be pushed back to the 2020–2024 Capital Plan.[23]

Every station is served by the G train.