Green Party of the United States

The GPUS was founded in 2001 as the Association of State Green Parties (ASGP) split from the Greens/Green Party USA (G/GPUSA). After its founding, the GPUS soon became the primary national green organization in the country, eclipsing the G/GPUSA, which was formed in 1991 out of the Green Committees of Correspondence (CoC), a collection of local green groups active since 1984.[10] The ASGP, which formed in 1996,[11] had increasingly distanced itself from the G/GPUSA in the late 1990s.[12]

The Greens gained widespread public attention during the 2000 presidential election, when the ticket composed of Ralph Nader and Winona LaDuke won 2.7% of the popular vote. Nader was vilified by many Democrats, who accused him of spoiling the election for Al Gore, the Democratic candidate.[13] Nader maintains that he was not a spoiler in the 2000 election.[14]

Main article: History of the Green Party of the United States

The political movement that began in 1985 as the decentralized Committees of Correspondence[15] evolved into a more centralized structure by 1990, opening a national clearinghouse and forming governing bodies, bylaws and a platform as the Green Committees of Correspondence (GCoC) and by 1990 simply The Greens. The organization conducted grassroots organizing efforts, educational activities and electoral campaigns.

Internal divisions arose between members who saw electoral politics as ultimately corrupting and supported the notion of an "anti-party party" formed by Petra Kelly and other leaders of the Greens in Germany[16] vs. those who saw electoral strategies as a crucial engine of social change. A struggle for the direction of the organization culminated a "compromise agreement", ratified in 1990 at the Greens National Congress in Elkins, West Virginia and in which both strategies would be accommodated within the same 527 political organization renamed the Greens/Green Party USA (G/GPUSA). It was recognized by the FEC as a national political party in 1991.

The compromise agreement subsequently collapsed and two Green party organizations have co-existed in the United States since. The Green Politics Network was organized in 1990 and the National Association of Statewide Green Parties formed by 1994. Divisions between those pressing to break onto the national political stage and those aiming to grow roots at the local level continued to widen during the 1990s. The Association of State Green Parties (ASGP) encouraged and backed Nader's presidential runs in 1996 and 2000. By 2001, the push to separate electoral activity from the G/GPUSA issue-based organizing led to the Boston Proposal and subsequent rise of the Green Party of the United States. The G/GPUSA lost most of its affiliates in the following months and dropped its FEC national party status in 2005.

The Green Party of the United States follows the ideals of green politics, which are based on the Four Pillars, namely:

The Ten Key Values, which expand upon the Four Pillars, are as follows:[2]

Peter Camejo was quoted in 2002 as claiming that he was a watermelon—green on the outside, but red on the inside.[18] In January 2004, he initiated the Avocado Declaration, which compares Greens to avocados. "An avocado is Green on the outside and Green on the inside".[19] The Declaration goes on to explain that Greens have a vital role in bringing democracy to the otherwise undemocratic two party system of the United States; that the Greens have a unique and independent identity as a third party, which cannot be subsumed into the Republican or Democratic parties; and that they cannot be dismissed by Republican or Democratic critics by implying that they are merely socialists or communists.

In 2016, the Green Party passed a motion in favor of rejecting both capitalism and state socialism, and instead supporting "alternative economic system based on ecology and decentralization of power".[2] The motion states the change that the party says could be described as promoting "'ecological socialism,' 'communalism,' or the 'cooperative commonwealth'".[2]

The Green Party does not accept donations from corporations, political action committees (PACs), 527(c) organizations or soft money. The party's platforms and rhetoric harshly criticize corporate influence and control over government, media, and society at large.[20]

The Green Party supports the implementation of a single-payer healthcare system. They have also called for contraception and abortion procedures to be available on demand.[21]

The Green Party calls for providing tuition-free college at public universities and vocational schools, increasing funding for after-school and daycare programs, cancelling all student loan debt, and repealing the No Child Left Behind Act. They are strongly against the dissolution of public schools and the privatization of education.[22]

In 2006, the Green Party developed a Green New Deal that would serve as a transitional plan to a one-hundred-percent clean, renewable energy by 2030 utilizing a carbon tax, jobs guarantee, tuition-free college, single-payer healthcare and a focus on using public programs.[23][24][25]

The Green Party favors the abolition of the death penalty, repeal of Three-strikes laws, banning of private prisons, legalization of marijuana, and decriminalization of other drugs.[26]

The Green Party advocates for "complete and full" reparations to the African American community, as well the removal of the Confederate flag from all government buildings.[27]

The party supports same-sex marriage, the right of access to medical and surgical treatment for transgender and gender-nonconforming people, and withdrawing foreign aid to countries with poor LGBT+ rights records.[27]

The Green Party calls on the United States to join the International Criminal Court, and sign the Comprehensive Nuclear-Test-Ban Treaty and Non-Proliferation Treaty. Additionally, it supports cutting the defense budget in half, as well as prohibiting all arms sales to foreign countries.[28]

The Green Party advocates for the Palestinian right of return and cutting all U.S. aid to Israel. It has also expressed support for the international Boycott, Divestment and Sanctions (BDS) movement.[30]

The GNC is composed of delegates elected by affiliated state parties. The state parties also appoint delegates to serve on the various standing committees of the GNC. The National Committee elects a steering committee of seven co-chairs, a secretary and a treasurer to oversee daily operations. The National Committee performs most of its business online, but it also holds an annual national meeting to conduct business in person.

Five Identity Caucuses have achieved representation on the GNC:

Other caucuses have worked toward formal recognition by the GNC:

The Green Party has its strongest popular support on the Pacific Coast, Upper Great Lakes, and Northeast, as reflected in the geographical distribution of Green candidates elected.[41] As of June 2007[update], Californians have elected 55 of the 226 office-holding Greens nationwide. Other states with high numbers of Green elected officials include Pennsylvania (31), Wisconsin (23), Massachusetts (18) and Maine (17). Maine has the highest per capita number of Green elected officials in the country and the largest Green registration percentage with more than 29,273 Greens comprising 2.95% of the electorate as of November 2006[update].[42] Madison, Wisconsin is the city with the most Green elected officials (8), followed by Portland, Maine (7).

In 2005, the Green Party had 305,000 registered members in states allowing party registration and tens of thousands of members and contributors in the rest of the country.[45] One challenge that the Green Party (as well as other third parties) faces is the difficulty of overcoming ballot access laws in many states, yet the Green Party has active state parties in all but a few states.

Main article: List of Green politicians who have held office in the United States

Musician Jello Biafra ran for several offices with the Green Party, including for President in 2000 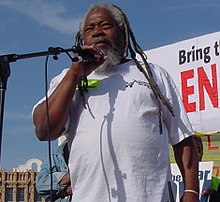 As of October 2016[update], 143 officeholders in the United States were affiliated with the Green Party, the majority of them in California, several in Illinois, Connecticut, Maine, Massachusetts, Oregon, Pennsylvania, and Wisconsin, with five or fewer in ten other states.[46] These included one mayor and one deputy mayor and fourteen county or city commissioners (or equivalent). The remainder were members of school boards, clerks and other local administrative bodies and positions.[46]

Gayle McLaughlin was twice elected mayor of Richmond, California, defeating two Democrats in 2006[54] and then reelected in 2010; and elected to City Council in 2014 after completing her second term as mayor.[55] With a population of over 100,000 people, it was the largest American city with a Green mayor. Fairfax, California; Arcata, California; Sebastopol, California; and New Paltz, New York are the only towns in the United States to have had a Green Party majority in their town councils. Twin Ridges Elementary in Nevada County, California held the first Green Party majority school board in the United States.[56]

Though several Green congressional candidates have topped 20%, no nominee of the Green Party has been elected to office in the federal government. In 2016, Mark Salazar set a new record for a Green Party nominee for Congress. Running in the Arizona 8th district against incumbent Republican Congressman Trent Franks, Salazar received 93,954 votes or 31.43%.[58]

Fundraising and position on Super PACs

In the early decades of Green organizing in the United States, the prevailing American system of money-dominated elections was universally rejected by Greens, so that some Greens were reluctant to have Greens participate in the election system at all because they deemed the campaign finance system inherently corrupt. Other Greens felt strongly that the Green Party should develop in the electoral arena and many of these Greens felt that adopting an alternative model of campaign finance, emphasizing self-imposed contribution limits, would present a wholesome and attractive contrast to the odious campaign finance practices of the money-dominated major parties.

Over the years, some state Green parties have come to place less emphasis on the principle of self-imposed limits than they did in the past. Nevertheless, it is safe to say that Green Party fundraising (for candidates' campaigns and for the party itself) still tends to rely on relatively small contributions and that Greens generally decry not only the rise of the Super PACs, but also the big-money system, which some Greens criticize as plutocracy.

Some Greens feel that the Green Party's position should be simply to follow the laws and regulations of campaign finance.[80] Other Greens argue that it would injure the Green Party not to practice a principled stand against the anti-democratic influence of money in the political process. Candidates for office, like Jill Stein, the 2012 and 2016 Green Party nominee for the President of the United States, typically rely on smaller donations to fund their campaigns.[81]

The following is a list of accredited state parties which comprise the Green Party of the United States.[82]